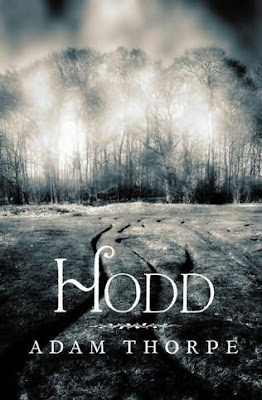 Occasionally I would like to review a book that has links with either the legend of Robin Hood or Disney’s live action movie. The book that I have chosen today is without doubt one of the best tales about the outlaw I have ever read. Hodd is the ninth novel written by British author, Adam Thorpe, who is described by The Times as ‘one of our most fiercely intelligent and intellectual writers'- and I can see why.
Thorpe’s novel uses the earliest surviving ballad of Robin Hood, the ‘talking of the munke and Robyn Hode’ as its base, which is dated at some time after 1450. (You can read this ballad by clicking on the Label ‘Robin Hood Ballads' below). But upon this base we sample amongst the many layers of medieval pastiche, the testimony of the pious monk, Matthew, who as a young minstrel boy describes his encounter on empty heathland with the half-crazed bandit ‘Hodd.’ This, the reader soon discovers is not the romantic merry outlaw portrayed in the modern media, but a ruthless brigand who follows the thirteenth century principles of the ‘heresy of the Free Spirit,’ and believes himself above God and beyond sin.
Matthew is 14 when he encounters Hodd. An orphan serving as a page in a monastery, he’s travelling with his master, a monk, when Hodd’s men rob them at knifepoint, relieving them of £100 and Matthew’s beloved harp. The two should be grateful that they manage to escape with the clothes on their backs and all their limbs intact, but the misguided Matthew is determined to reclaim his harp. His identity is tied up with the instrument, which he stole several years earlier from his first master, a beach-dwelling hermit who taught him Latin.
Back at the monastery, Matthew decides to sneak into Hodd’s camp and retrieve the harp. That he’s caught is no surprise. What is unusual is that unlike Hodd’s other prisoners, who are tortured, murdered or made to dance naked together-not only is Matthew’s life spared after they hear him compose and sing songs in praise of Hodd’s actions - but he becomes Hodd’s favourite confidant. The outlaw gives the young minstrel the nickname Moche (Much).
14 year old Matthew (Moche) is horrified by their lawless ways and, in particular, by the fact that his new master seems to place himself above God. Hodd is a psychopath with mystic moments, a drunk having trouble mumbling through his crooked teeth, who conceals his branded forehead and protuberant eyes under the hood that gave him his name. He is anti-Church, anti-establishment, and clings to a heretical belief in the individual that chimes interestingly with the modern age. "He told me, not that he was God, but that he was more than God" and that "God is merely an invention.... 'There is no sin,' he repeated, his words blurring deliciously [suaviter] inside my head.’ The one who is perfect, who has attained perfection, cannot sin even if he wished to, for everything he does is necessarily perfect.'"
Later, after Matthew has escaped from the malign influence of Hodd and his henchmen, he is appalled to find that his light-hearted ballads about 'Robbing Hodde’ have somehow turned the common felon into a sentimentalised folk hero and have become extremely popular. So although age has buckled his fingers he takes up his goose feather pen in a last attempt to lighten his burdens and correct the popular myth of this outlaw.
It is the translation of Matthew’s Latin manuscript, that has been recovered by a British army officer from the crypt of a bombed out church on the Somme during the First World War, which forms the central theme of Thorpe’s novel. The officer takes it upon himself to translate and annotate the “bulky, stained and occasionally illegible manuscript, stitched crudely together with gut.”
But we also have frequent interjections from the fictional translator and other unknown sources amongst the 408 footnotes. This make the book feel like a genuine source text, especially when concerned with Latin translation or similar and possibly becomes tedious for some readers.
But after a while this all adds to the total authenticity of the experience, and on reflection it wouldn’t be the same book without the academic trappings.
I found Thorpe’s Hodd a thoroughly refreshing and enjoyable experience and recommend it to anyone with an interest in the legend of England’s famous outlaw.
Hodd is written by Adam Thorpe and published by Jonathan Cape in London.

Hodd by Adam Thorpe, published by Jonathan Cape in London.