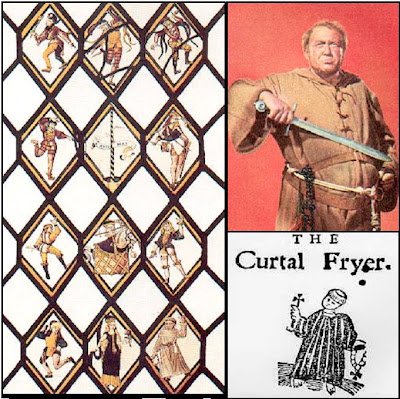 In this our spacious isle I think there is not one
But he hath heard some talk of Hood and Little John;
Of Tuck, the merry friar, which many a sermon made
In praise of Robin Hood, his outlaws, and their trade.
(Michael Drayton -Poly-Olbion)

Friar Tuck is not mentioned in the existing medieval ballads of Robin Hood, although the Bishop Percy Folio does contains the later Robin Hood and the Curtal Friar (c.1640). But in this he is simply known as the cutted or curtailed friar.

I beshrew thy head, said the cutted ffriar,
Thou thinks I shall be shente;*
I thought thou had but a man or two,
And thou hast a whole convent. * hurt

Friar Tuck first appears in an early play of twenty-one lines written on the back of some household accounts, dated May 1475- August 1475, known as ‘Robin Hood and the Sheriff’. This verse-play seems to be based on the ballad of Robin Hood and Guy of Gisborne and was found amongst the papers of the famous Paston family of Norfolk.

Beholde wele frere Tuke
Howe he dothe his bowe pluke.
Yeld yow, syrs to the sheriff,
Or ells shall your bows clyffe,
Nowe we be bownden alle in same,
Frere Tucke this in no game.

It does seem that Friar Tuck, like Maid Marian was a later addition to the legend via the popular summer plays and parish festivals where the Queen of May and the jovial fat friar played an important part. In 1536 Sir Richard Morison made this complaint to Henry VIII:

In Summer commonly upon the holy days in most places of your realm there be plays of Robin Hood, Maid Marian, Friar Tuck: wherein, beside the lewdness and ribaldry that there is opened to the people, disobedience also to your officers is taught whilst these good bloods go about to take from the sheriff of Nottingham one that for offending the laws should have suffered execution.

At Paske began our morris, and ere Pentecost our May,
Tho Robin Hood, Li’ell John, Friar Tuck and Marian deftly play.


Henry Machyn watched an elaborate procession in London in 1559:

....A May-game .....and sant John Sacerys, with a gyant, and drums and gunes the Nine Worthes and then Sant Gorge and the dragon, the mores dansse, and after Robyn Hode and Lytull John and maid Marian and frère Tucke, and they had spechys rond a-bowt London.

Appended to William Copeland’s printed edition of the Mery Geste of Robyn Hoode between 1548-1569, were two summer plays, ‘to be played in Maye games very plesaunte and full of pastyme’, Robin Hood and the Potter and Robin Hood and the Friar. Unlike the earliest surviving ballad, the friar is, like in the Paston play, known as Tuck, but the usual elements of the story are here. Robin’s traditional fight in the water with the friar, the blowing of his horn, the friar’s dogs and the invitation to join the outlaws. But the link with the May Festival and Summer Games is revealed in the last few lines of the play.

Fryer: Here is an huckle duckle,
An inch above the buckle.
She is a trul* of trust,
To serve a frier at his lust,
Aprycker, a prauncer, a terer of sheses,**
A wager of ballockes, when other men slepes,
Go home, ye knaves, and lay crabbes in the fyre,
For my lady and I wil daunce in the myre for very pure joye.

The lady Friar Tuck refers to, in the final line of the play, is almost definitely Maid Marian, his constant partner in the Morris Dances and Whitsun festivals. The churchwardens accounts at Kingston-Upon-Thames from 1507-36 show some of the charges for costumes for what are described as mores daunsaies. In 1509 there was a bill for 12s 10d for a piece of Kendal cloth to make coats for Robin Hood and Little John and three yards of white cloth for Friar Tucks habit, 3s. 4d for four yards of Kendal cloth for Maid Marian’s hooded cloak, 4d for gloves for Robin and Marian and 6d for six broad arrows. One of the earliest known illustrations of these entertainers, can be seen at Betley Old Hall in Staffordshire where depicted in a small painted glass window, designed for George Tollet Esq. are dancers around a May Pole and in the bottom right hand corner we see the Queen of the May or Maid Marian and the Friar.

Royal writs of 1417 describe a chaplain of Lindfield in Sussex called Robert Stafford, who assumed the name ‘frere Tuck’, when he led an outlaw band committing murders and robberies in Surrey and Sussex. Friar Tuck’s crimes also included menacing the local forest wardens and warreners with violence, burning their lodges and hunting without licence. Stow’s Annals reveal :

In 1416 a commission was issued to, Thomas Canoys, Thomas Popynges and John Pelham to arrest a man using the alias Frere Tucke and other malefactors of his retinue who have committed divers murders, homicides, robberies and depredations etc. In the counties of Surrey and Sussex and bring them before Council.

Later we get another commission given to William Lasyngley and Robert Hull:

To enquire into the report that a certain person assuming the unusual name of Frere Tuck and other evil doers, have entered parks, warrens and chases of divers lieges of the king in the counties of Surrey and Sussex and divers times; hunted therein and carried off deer, hares and rabbits, pheasants and partridges.

Stafford continued these exploits for twelve years and was later pardoned in November 1429. These legal documents seem to show that the name Friar Tuck had never been heard of before and one of the clerk’s writing in the calendar of patent rolls describes the name ‘Friar Tuck’ as ‘newly so called in common parlance’. So was this renegade chaplain, Robert Stafford, the original Friar Tuck?

The interchangeable comic priest, who supplied ecclesiastical parody at the summer festivals, was originally known variously as the Abbot of Unreason, Abbot of Marham, and Abbot of Bonacord. But the local churchwardens accounts show that over time those traditional characters gave way to the more popular, jovial fat Friar Tuck. Some believe his name could have originated from the Old English ‘Tucian’- to torment or disturb. In more modern times, due partly to Sir Walter Scott’s Ivanhoe (1819), where he portrayed Friar Tuck as the jolly Clerk and Hermit of Copmanhurst, the name Tuck has been linked to a greediness for food and the Australian tucker. Which in turn has give rise to the many Friar Tuck food outlets around the globe including countless cafe’s and restaurants.

The hermit only replied by a grin; and returning to the hutch, he produced a leathern bottle, which might contain about four quarts. He also brought forth two large drinking cups, made out of the horn of the urus, and hooped with silver. Having made this goodly provision for washing down the supper, he seemed to think no farther ceremonious scruple necessary on his part; but filling both cups, and saying, in the Saxon fashion, ``Waes hael, Sir Sluggish Knight!'' he emptied his own at a draught.

Scott’s interpretation of the gluttonous hermit can be found in most modern versions of the Robin Hood legend, including the Disney movie The Story of Robin Hood and his Merrie Men (1952). Our first introduction to the jolly friar in this film, has him sat by a river, near his hermitage taking gargantuan swigs of Malmsey wine out of his leather bottle and swallowing large slices of Capon Pie. In this film, James Hayter stole the show with his unforgettable portrayal of Friar Tuck, a role he recreated in 1967 for Hammer’s Challenge for Robin Hood. Hayter later went on to become the television advertisers recognisable voice of Mr Kipling Cakes.

The antiquarian Francis Douce (1757-1834) suggested that the name Friar Tuck could have been a generic name for any friar, because the friar’s habit was often tucked or folded by means of a chord to make it easy to walk in. Geoffrey Chaucer describes the Reeve in his Canterbury Tales as tucked he was, as in a frère aboute.

And generally this is the accepted explanation for the origin of the name of the curtailed or tucked friar.