On Stage with Joan Rice 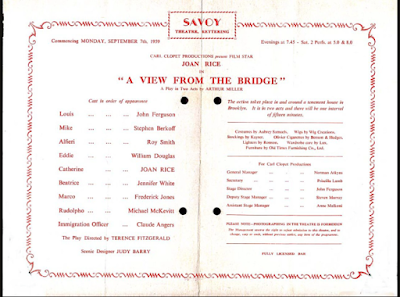 Above is a theatre programme of Arthur Miller’s ‘A View From The Bridge,’ which was kindly sent in by Neil, showing Joan in her favourite play as Catherine, at the Savoy Theatre in Kettering in September 1959.

We now know that Joan Rice (1930-1997) was appearing in various theatrical productions from 1955 onwards and continued performing on the stage as her film career sadly faded. Back in October I received this interesting email from Julia Wright:


Fresh out of drama school in 1963 or 4, I was her understudy in a touring production of a play name of which I have totally forgotten. I believe it was with Carl Clopet Productions, not in the first rank of theatrical companies but kept many of us employed. I think it was a new play and it was hoped it would make it into the West End but there were problems - not Joan's fault. The leading man was sacked just before the tour started because he couldn't remember lines and it was a lousy play. We toured exotic spots like Cardiff and the closest we got to the West End was Streatham. At least she made it to Hollywood and had her moment in the sun and I'm glad she didn't spend her life pining for what had and might have been in show business that killed off so many but made a life for herself.


Many thanks to Julia for sharing this information. 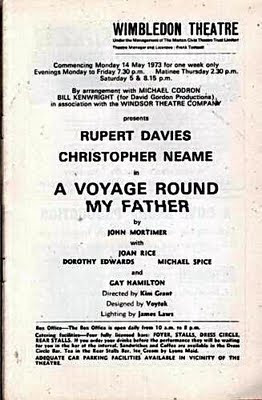 Above is a another theatre programme, this time showing Joan performing in John Mortimer’s ‘A Voyage Round My Father’ at the Wimbledon Theatre from May 1973.


I hope these postings have helped counter the statements by Richard Todd and film director Ken Annakin that Joan was never an actress.

It is interesting to see Gay Hamilton also listed in the programme above. Gay had played the part of Maid Marian in the Hammer production ‘A Challenge for Robin Hood,’ in 1967; Joan of course played the same part beautifully for Walt Disney in 1952. Both actresses appeared alongside James Hayter as Friar Tuck.

This site is dedicated to the memory of Joan Rice. If you have any information about her life and career or ever met her, I would love to hear from you. Please get in touch at disneysrobin@googlemail.com.

To read more about Walt Disney’s first Maid Marian please click here:- Joan Rice. There is now over 78 pages on this site about her life and career.

Geoff Waite has very kindly contacted me regarding the film that accompanied Walt Disney's Story of Robin Hood and his Merrie Men during its provincial premieres in 1952.


Geoff says:
"I seem to remember you were interested in discovering what the second feature was when Disney’s ‘Robin Hood’ was first released, but I don’t recall if you were ever able to discover the name of the film.

I am attaching a photo of Elton Hayes attending the opening of The Story of Robin Hood on 27 April 1952 at the Gaumont Theatre, Liverpool. This was four days after the Manchester provincial premiere. On the back of the photo it says ‘Mr. Elton Hayes and Mr. Wynne Jones’ (Liverpool Evening Express).

As you will see from the photo, on the poster displayed between Elton and Mr Jones the second feature is shown as being Hammer the Toff starring John Bentley and Patricia Dainton. The film, released in 1952, also starred Valentine Dyall and was based on a book by John Creasey."

A huge thank you to Geoff for sending in his picture and helping to answer a question that has been bothering me for many years.

The New York Times review of June 27th 1952 describes the two accompanying films to Disney's Robin Hood in America as Water Birds (a true-life adventure) and a cartoon short called The Little House.

On line sources show that Hammer The Toff was first released to British cinemas in March 1952. The world premiere of Walt Disney's Story of Robin Hood and his Merrie Men was at the Leicester Square Theatre in London on the 13th March of that year. As we now know from Geoff's previous research  there was a Provincial Premiere in Manchester on the 23rd April and at the Gaumont Theatre in Liverpool on the 27th April. So was Hammer The Toff  the second feature during the 'general' release of Robin Hood around the country in 1952? If you can confirm this please get in touch.

There is now a great deal of reports about the star studded premiere of Walt Disney's Story of Robin Hood on this blog. Please click here to read more. And with the help of Geoff Waite we have also accumulated a vast amount of information on the life and work of Elton Hayes here.

All the pictures taken at the provincial premieres and used on this site are the property of Geoff Waite.