One of the most popular places in England connected to Little John is Hathersage, a village in the Derbyshire Peak District. It is here in the 1620's that the local antiquarian, Roger Dodsworth wrote of the tradition that Robin Hood's faithful companion is buried.

The modern gravestones replace what Elias Ashmole (1617-1692) had seen when writing in the late seventeenth century:

“The famous Little John lyes buried in Hathersage Church yard within 3 miles fro Castleton, in High Peake, with one Stone set up at his head, and another at his Feete, but a large distance betweene them. They say a part of his bow hangs in the said Church. Neere Grindleford Bridge are Robin Hood 2 pricks."

The bow was recorded as being made of spliced yew, 79in long (about 2 meters), tipped with horn, weighing 21lb and requiring a pull of 160ilbs to draw it. The bow and a cuirass of chainmail both said to have belonged to Little John were hung in Hathersage church chancel for many years, until they were removed by a William Spencer in 1729 and taken to Canon Hall near Barnsley in Yorkshire for better security. The cuirass was later lost!

In about 1950 a Mr. H. C. Haldane was photographed holding ‘Little John’s Bow’ outside Canon Hall in Barnsley. By this time the horn tips were missing and the ends were broken off. Engraved on the bow grip is the name of a Colonel Naylor, who shot an arrow from it at Cannon Hall in 1715.

Originally 'Little John’s Grave’ had been marked by a head and foot stone, both marked with the initials ‘I.L.’ as described by E. Hargrave in his ‘Anecdotes of Archery’ in 1792.

The grave was excavated by a Captain James Shuttleworth (d.1826) in 1784 and it is reported that he discovered a thigh bone of ‘twenty eight and a half inches long’ (71.25cm). This would make the person in the grave originally about eight feet tall!

A local story says: ‘James Shuttleworth took the bone to Cannon Hall to show his cousin. The two men then exhibited to an old huntsman who shook his head and told them that, ‘no good will come to either of ye, so long as ye keep dead men’s bones above ground.’ The huntsman was called Hinchcliffe who measured the bone and said the exact length was 28 1/2 inches!

James Shuttleworth took the bone back to Hathersage and hung it above his bed. After a series of accidents a nurse told him the same as the old huntsman, that he would never have luck as long as he kept dead men's bones out of their graves. So James sent the bone back to the Sexton with an order to put it back into the grave. But instead he displayed it in his window and charged sixpence for viewing. But one day a William Strickland, passing through Hathersage carried off the bone, on the pre-text of showing a friend, much to the dismay of the Sexton. He returned it to Canon Hall and buried it under a tree, it was lost forever.’ 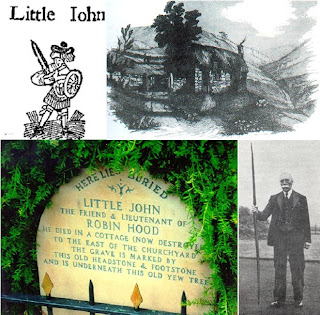 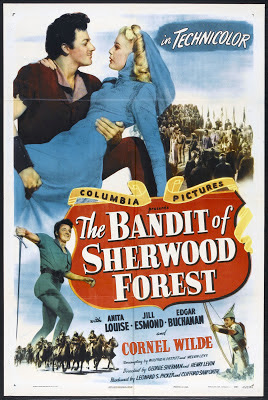 Occasionally I like to look at how the legend of Robin Hood has been interpreted on the silver screen. There are now 40 pages dedicated to the ‘Robin Hood’ movies. Of course The Adventures of Robin Hood (1938) is looked upon by every movie critic as the bench-mark to which all later cinematic versions about the outlaw hero are judged and it took Hollywood eight years before they attempted a return to  the outlaw’s haunts. But they did, with Columbia’s The Bandit of Sherwood Forest (1946), which is based on the novel, ‘Son of Robin Hood’ by Paul A Castleton. 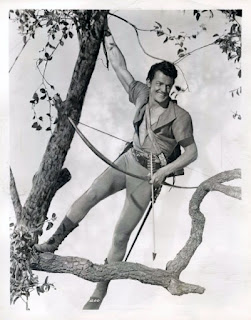 Cornel Wilde as Robert of Nottingham

The tyrannical King John is now dead and the outlaws have all disbanded. Robin (Russell Hicks) and Marian have a fully grown son, Robert of Nottingham (Cornel Wilde), who eventually helps the Queen Mother and the beautiful Lady Catherine (Anita Louise) to protect the young King Henry III from the evil William Pembroke (Henry Daniell) and the nasty, but bumbling Sheriff (Lloyd Corrigan). 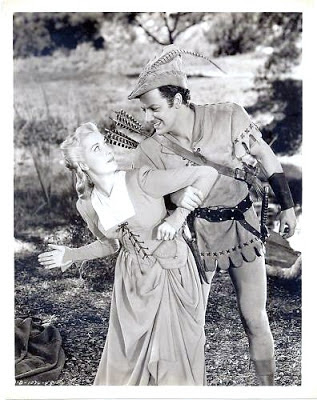 Of course, the veteran Robin Hood, Earl of Huntingdon, and his band of stalwarts Little John (Ray Teal), Friar Tuck (Edgar Buchanan), Will Scarlet (John Abbott) and Allen-A-Dale (Leslie Denison) return to their old ways to assist his son and save the young king from the clutches of the despotic Regent of England.
This 85 minute romp through the pages of England’s favorite story book hero has very little of the quality of the previous Warner Brothers masterpiece. But it does retain the sumptuous Technicolor glamour of its predecessor, owing to the experience of three cinematographers including, Tony Gaudio, who had previously worked on The Adventures of Robin Hood. 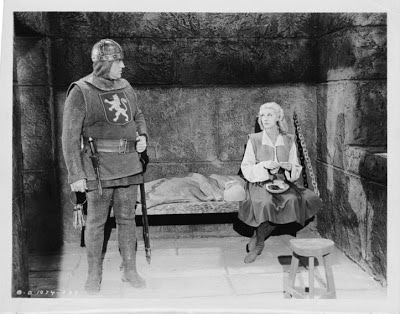 With his specially padded shoulders and his toothy smile, (somewhat reminiscent of Douglas Fairbanks) Cornel Wilde (a real-life Olympic champion fencer) does an acceptable job as the son of the outlaw. Anita Louise as the high-born Lady Catherine, lady-in-waiting to the Queen Mother, finally got her chance to become the love interest in a ‘Robin Hood Movie’. She had previously been scheduled to play Maid Marian alongside Errol Flynn for Warner Brothers but was dropped in favor of Olivia deHavilland. 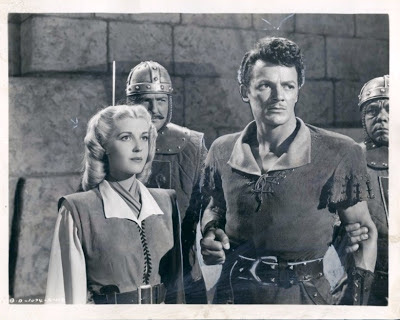 Anita Louise and Cornel Wilde
On several occasions, particularly during the ‘Bandit’s’ climatic sword-fight scene in the castle, we also witness a nod to the famous expressionistic shadow shots used by the ‘Adventures’ director Michael Curtiz’. But sadly, with the Merry Men all galloping around on stallions like the 7th Cavalry, this movie has more resemblance to the fast pace and shoot -‘em-up qualities of a B-western produced for Saturday matinees. Still, this colorful adventure did earn Columbia an impressive $3 million at the box office, which is impressive for a movie with a modest budget like this one. 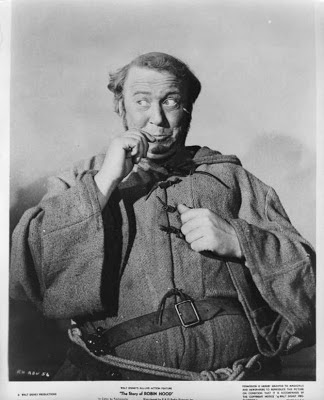 I recently received an email from Elina Lampart asking permission to use some stills and pages of information from my blog regarding the great character actor James Hayter. She runs a site dedicated to the classic TV series Are You Being Served, in which he appeared as the cantankerous Mr Tebbs.

In Walt Disney’s Story of Robin Hood (1952), Hayter played one of the most memorable Friar Tuck’s of all-time and went on to re-create his famous role for Hammer Films A Challenge for Robin Hood in 1967. But in his long acting career he starred in countless film, stage and television productions.  He is probably best remembered for being the voice of Mr Kipling Cakes and James Onedin’s father-in-law in the costume drama, The Onedin Line.
But towards the end of his long and illustrious acting career, Hayter was chosen by comedy writer and producer, David Croft, to appear as a new assistant in his successful TV series Are You Being Served. Croft said:

"James Hayter had not worked for me before, but he was a well known featured player in movies over here,” Croft remembers, “and as far as I was concerned was the only candidate providing he was available and willing to play the part."
So as the mischievous Percival Tebbs, Hayter appeared in 6 episodes of Are You Being Served. Unfortunately for many years, Mr Kipling Cakes had used his distinctly fruity voice, for their advertisements on British television and the company did not like the character he now portrayed in this series.
They thought the personality of the character he portrayed was unpleasant and had an air of indignity that might put the viewing public off buying their “exceedingly good cakes”!

Hayter at first argued that he was free-lance and could chose to play any character he desired, but when Mr Kipling Cakes finally offered him three times his BBC salary for the next series, not to do it and terminate his contract, he accepted.
The cast of Are You Being Served were very disappointed to see such a successful comedy talent leave, but he confessed, “if they are prepared to pay me three times as much not to it, then I won’t do it– at my time of life, I have no more ambition.”

This is the link to Elina’s very informative web site dedicated televisions classic comedy series Are You Being Served and the career of James Hayter.

This blog also has 20 pages of information on the life and career of James Hayter and many pictures and stills. Also, don’t forget to vote for your favorite Friar Tuck of all time in the side-bar.
3 comments: 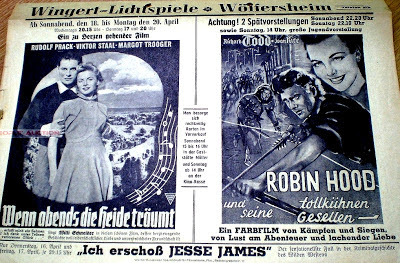 Above is a very rare German advertiseing leaflet promoting Walt Disney's live-action movie the Story of Robin Hood and his Merrie Men. The film was first released in West Germany in 1952. As Joan Rice gets top billing (alongside Richard Todd) and an interesting portrait in the top right-hand corner, I supsect that this leaflet was produced about that time.

There are now many various posters and lobby cards on this blog, from all around the world, showing the different images and colourful illustrations used to advertise this Disney masterpiece.
3 comments:

Email ThisBlogThis!Share to TwitterShare to FacebookShare to Pinterest
Labels: Leaflets 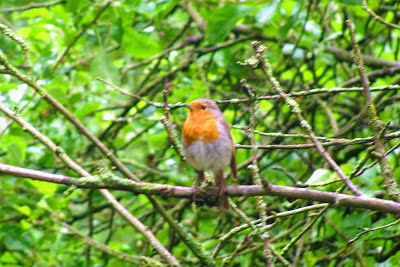 Above is the only Robin I saw during my visit to Sherwood Forest last year!

A very Happy New Year to all my readers and thank you for your continued support. This blog has continued to grow beyond my wildest dreams and a lot of it it is due to the amazing input and encouragement of Neil, Albie, Trish, Mike, Geoff and Laurence. Thank you so much for your help and regular comments.

This site is now getting over a hundred visits a day so hopefully we will hear from a few more readers this year!
3 comments: