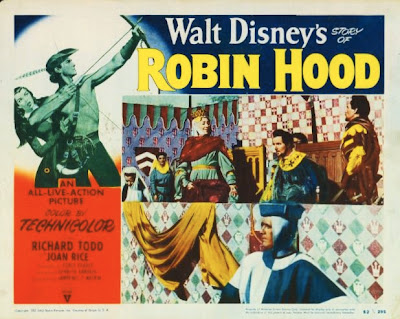 Above is another colourful lobby card, promoting Walt Disney's Story of Robin Hood and his Merrie Men (1952). On the dais is Joan Rice (sitting far left) as Maid Marian, the fabulous Martitia Hunt (centre, standing)  as Queen Eleanor, Hubert Gregg (getting up) as Prince John  and the moody but magnificent Peter Finch (standing, far right) as the Sheriff of Nottingham.
1 comment:

Richard Todd at the Dundee Rep 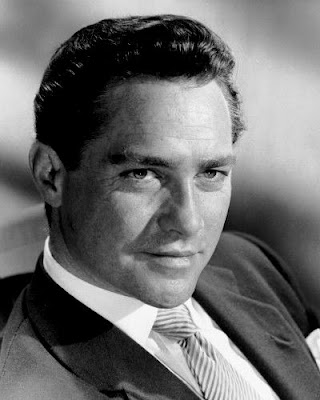 Shortly before receiving his call-up papers in July 1940, Richard Todd had become a co-founder of the Dundee Repertory Theatre. In his autobiography, ‘Caught in the Act’, Todd describes how the small-time impresario Robert Thornley had  asked him to join his recently formed small  company and had chosen Her Majesty’s Theatre Dundee by closing his eyes and jabbing a list of theatres with a pin!

Richard Todd was delighted to accept Thornley’s invitation and appeared in the opening play, ‘On the Spot.’ The huge theatre was very run down and in need of a great deal of repair, so Thornley eventually managed to acquire Dundee’s Forester’s Hall. After gathering together a consortium of businessmen in three days, he was able to finance a reconstruction of the Hall and by the end of the year it became the new permanent theatre. So on Wednesday 20th December 1939 the Dundee Repertory Theatre was finally launched with a gala performance of ‘Hassan.’

With the clouds of war looming in the background, the aspiring young actor Richard Todd, (who was eagerly awaiting his call-up papers) was beginning his now legendary stage and film career. 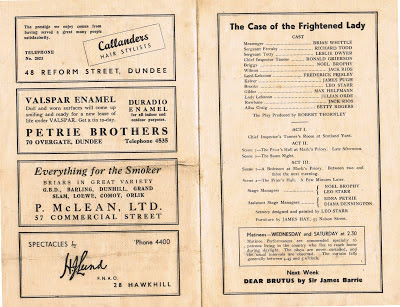 Above is a programme, provided by Neil, from March 1940 showing the Dundee Rep with Richard Todd in ‘The Case of The Frightened Lady.’ Four months later, he received his call-up papers and was sent to Strensall Camp, the site of the King’s Own Yorkshire Light Infantry and the start of his heroic war years. Later, as a member of the 6th Airborne Division he became the first man of the main force to parachute out over Normandy on D-Day. 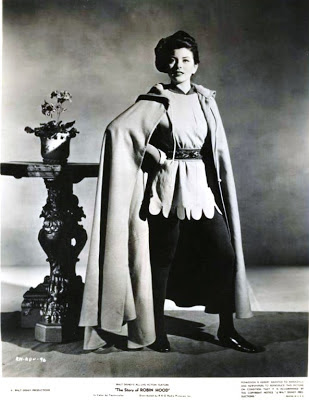 Last week we looked at how Walt Disney set up Perce Pearce and Fred Leahy to supervise the production of his early live-action movies in England. Below is an example of Disney’s concentration on the detail in a memo he sent to them during the pre-production of the Story of Robin Hood and his Merrie Men (1952):

“The final tests arrived the first part of the week and we looked at them. I think [Richard] Todd is wonderful, and I feel he will project a great deal of personality and do a lot for the role.
Joan Rice is beautiful and charming. I think, however, she will need some help on her dialogue. I thought at times, she lacked sincerity, although one of her close-ups was very cute. I do not care much about her costume in the first scenes. It seems that women of that period always have scarves up around their chins, but I think it does something to a woman’s face. I’d like to see us avoid it, if possible, or get around it in some way or other-maybe use it in fewer scenes.
When we see Miss Rice disguised as a page, this costume seemed bulky and heavy. The blouse or tunic was too long and hung too far down over her hips-it didn't show enough of her and I thought distracted from her femininity. I do believe the costume did much to set off her femininity. I think a slight showing of the hips would help a lot. 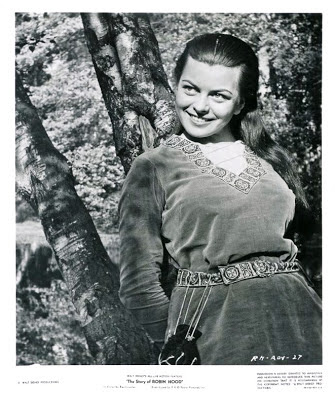 I liked Elton Hayes as Allan-a-Dale. He has a good voice with quite an appeal. The last word I had from Larry [Watkin] was to the effect that he would be sending in a new and complete script very soon. I have been following his changes and the little thoughts I have are close to “lint-picking”, which I feel he is smoothing out in his final script, so I won’t bother about passing on my thoughts until I get his so-called final script...”

This is a fascinating insight into the pre-production of the Story of Robin Hood and although we do know a little about the original ideas for the movie, I can’t help wondering what the original script was like!

At the start of this post we see a still from the movie, showing Joan Rice as Maid Marian, in what might be the page’s costume that Disney mentions - as it was never worn in the film. 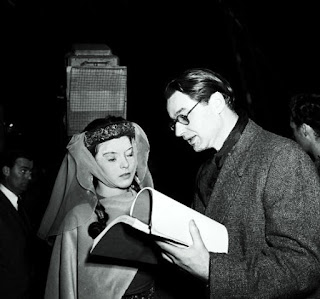 Joan Rice with Ken Annakin going over the script.

In his memo, Walt Disney describes Joan Rice’s difficulties with the dialogue. The director, Ken Annakin went into great detail in his autobiography about the problems he had with her; how he had to slavishly go over the script with her word for word. But it is worth mentioning, I believe, that this was only her second role in a movie and apart from being rushed through the ‘Rank Charm School’ a year earlier; my research has shown that she had no experience in acting beforehand.

From Animation to Live-Action


The British government, in an attempt to revive its own film industry after the war, had imposed a 75% import tax on American films shown in Britain and ordered that 45 % of the films shown in British theaters be made in England. (A similar restriction had been agreed in France). This was a terrible blow to the Disney studio and to make matters worse, the French and British governments had both impounded receipts earned by American studios in those countries, insisting that the currency be spent there. For the Disney studio, this amounted to more than $1 million. Obviously Walt couldn't set up an animation studio in England or France, but he had another option. He could make a live-action film in England and finance it with the blocked funds. In effect, then, when Walt Disney finally crossed over into live-action, it was because the British government had forced him to do so. 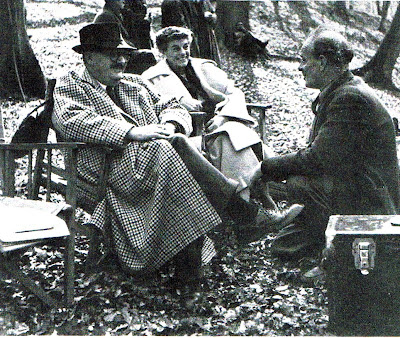 The project Walt selected for his live- action feature was Robert Louis Stevenson’s Treasure Island and he dispatched Perce Pearce and Fred Leahy to England to supervise the production. But he remained unusually involved in the post production  at least compared to the offhanded way he had been treating recent films. He had asked Pearce and Leahy to air-mail him specific takes for editing, and after a test screening in early January, he ordered them to cut ten to twelve minutes and provide a more forceful musical score; he also advised them that a more detailed criticism would follow. Two day later he ordered the editor to fly from England to Los Angeles, apparently so that Walt could oversee the editing himself.

The finished film, Walt Disney’s first all live-action feature, was both a critical and financial success- unbelievably the first in a long, long time. Treasure Island (1950) grossed $4 million, returning to the studio a profit of between $2.2 and $2.4 million. With the euphoria of this success was the worry that the animation side of the studio was dying. But Walt reassured those that had raised concerns, (including Douglas Fairbanks Jnr.) “We are not forsaking the cartoon field-it is purely a move of economy-again converting pounds into dollars to enable us to make cartoons here.” So in a strange turn, Disney had to make live-action films now to save his animation. 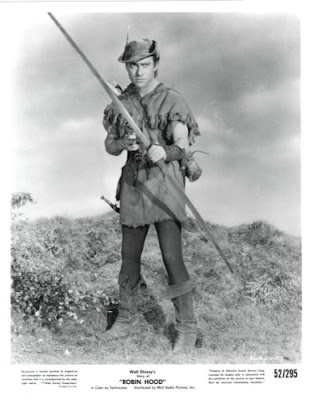 In July 1951, just as his cartoon version of Alice in Wonderland was released in America, Walt Disney visited Europe with his wife Lillian and his daughters to supervise his second live-action movie. The Story of Robin Hood and his Merrie Men (1952) was financed again by the blocked monies of RKO and Disney. Before leaving, Walt had screened films at the studio, looking at prospective actors and directors and making what he himself called ‘merely suggestions’, while he left the final decisions to Perce Pearce, who was producing. For his part, Pearce had laid out every shot in the movie in thumbnail sketches, or storyboards, just as the studio had done with the animators, and sent them on along with photostats and the final script to Walt for his approval, which Walt freely gave, though not without a veiled threat that Pearce had better make the film as quickly as possible. “This is important not only to the organization but to you as the producer,” he wrote. 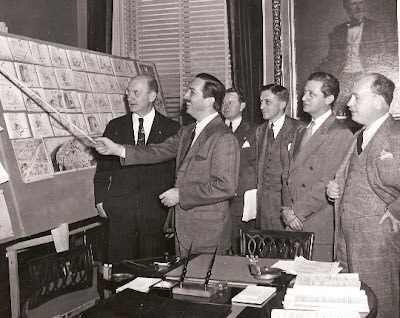 The use of storyboards was new to ‘Robin Hood’ director Ken Annakin, “but it appealed to my logical brain very, very much,” he said later, and prompted ingenious scenes such as the first meeting between Prince John and the Sheriff of Nottingham after King Richard has left, played on the balcony of the castle against a brilliant but ominous orange sky at sundown. “I had never experienced sketch artists, and sketching a whole picture out,” Annakin said. “That picture was sketched out, and approved by him—but it was designed in England, and sketches were sent back to America.” For all his influence and control, Walt was not an overbearing studio head in Annakin’s view. “Basically, he visited the set maybe half a dozen times, stayed probably two or three hours while we were shooting.”

Though Walt delegated a good deal of authority on these films, he nevertheless took his approval of the storyboards seriously. When he noticed that one sequence wasn't shot exactly as agreed, he questioned Ken Annakin as to why. Annakin replied that he was going over budget and wanted to economize. “Have I ever queried the budget?” Walt asked. “Have I ever asked you to cut? Let’s keep to what we agreed.” In the end, Annakin never wavered from his understanding that the film he was making was, even with his own directorial expertise and perspective, and an insistence on a more authentic telling of the Robin Hood story, a Walt Disney production. 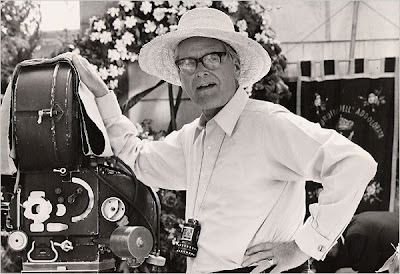 
Meanwhile as Robin Hood was being filmed, Walt, Lillian and his daughters wandered through Europe, visiting the Tivoli Gardens in Denmark, and did not return to the studio until August.

While making those live action movies in England (which also included Sword and the Rose (1953) and Rob Roy the Highland Rogue (1954)), “Walt achieved something that I’m not sure he actually knew he was going to achieve”, suggests Disney authority Brian Sibley,  “which was that he placed himself as being not just an American filmmaker, but also a European filmmaker—or specifically a British filmmaker. We thought of him as making films not just about us, but making them here as well. I think that that gave Britain a kind of ‘ownership’ to Walt Disney, and that only came about in the ‘50s.”


Inside the Dream: The Personal Story of Walt Disney by Katherine & Richard Greene (2001)