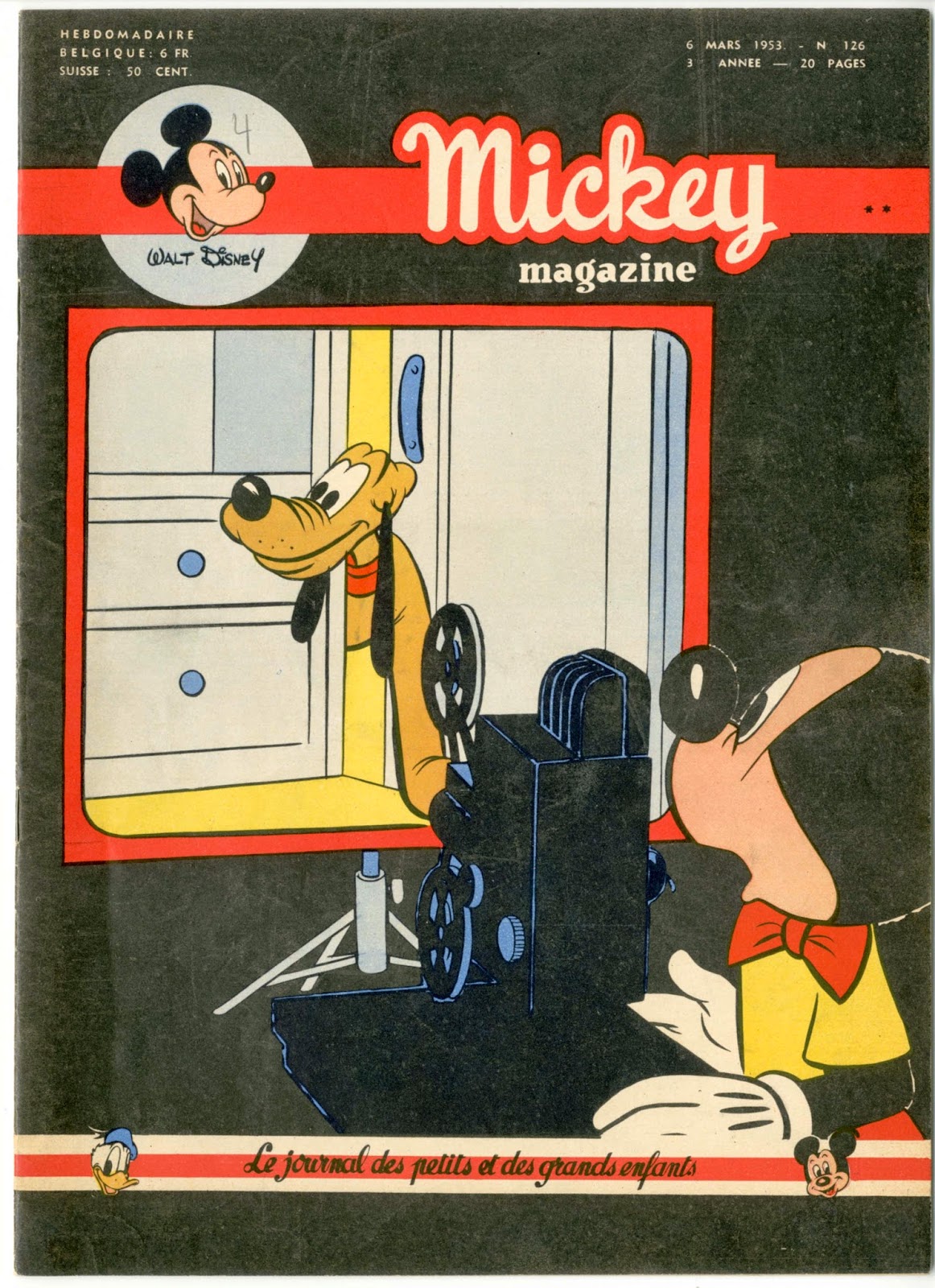 This is the fourth edition of the comic strip adaption of Walt Disney's live action movie The Story of Robin Hood and his Merrie Men (1952).

The comic strip appeared in the Belgian Mickey Magazine during the early 1950's and Matt Crandall has kindly sent me copies of the artwork. 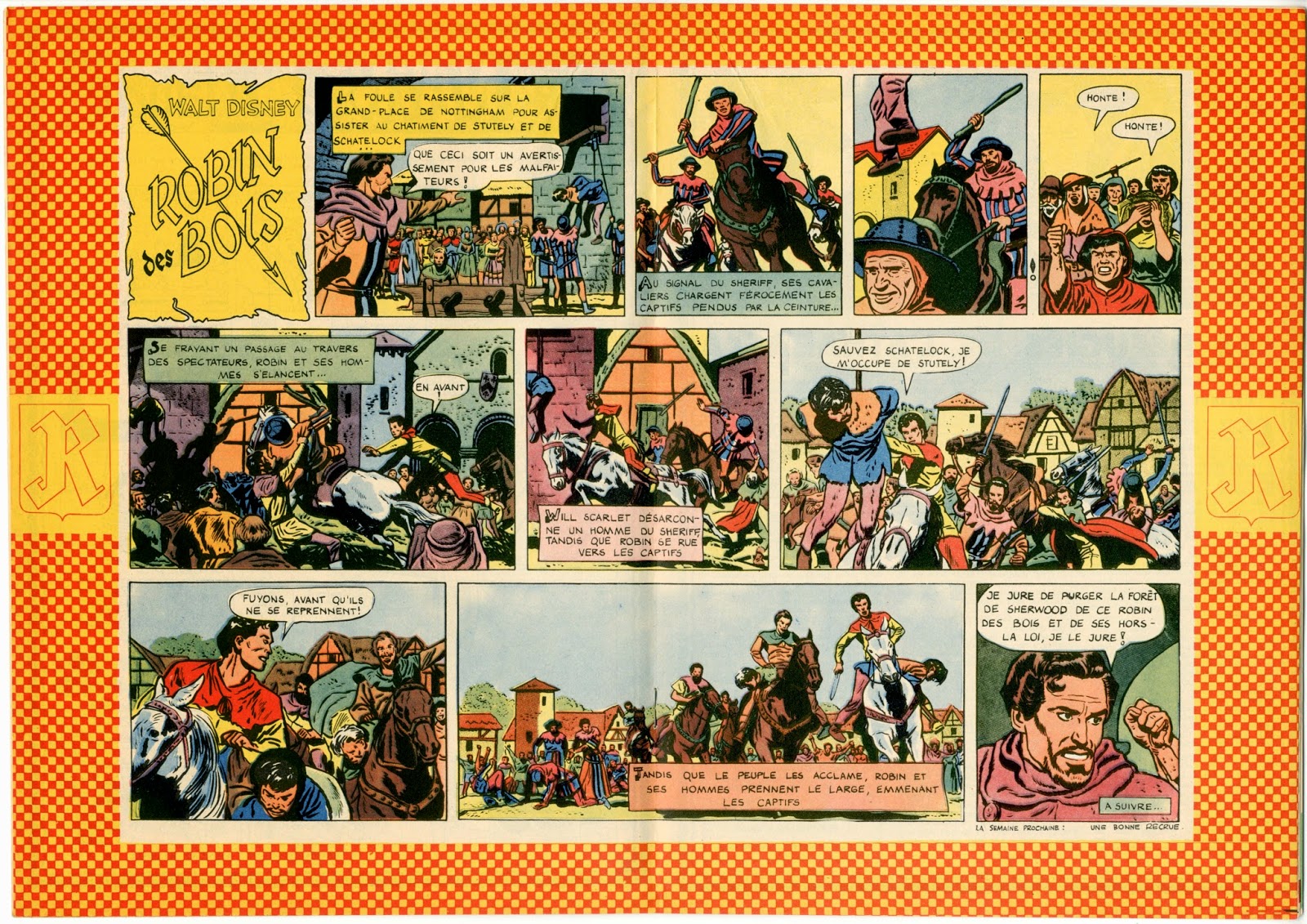 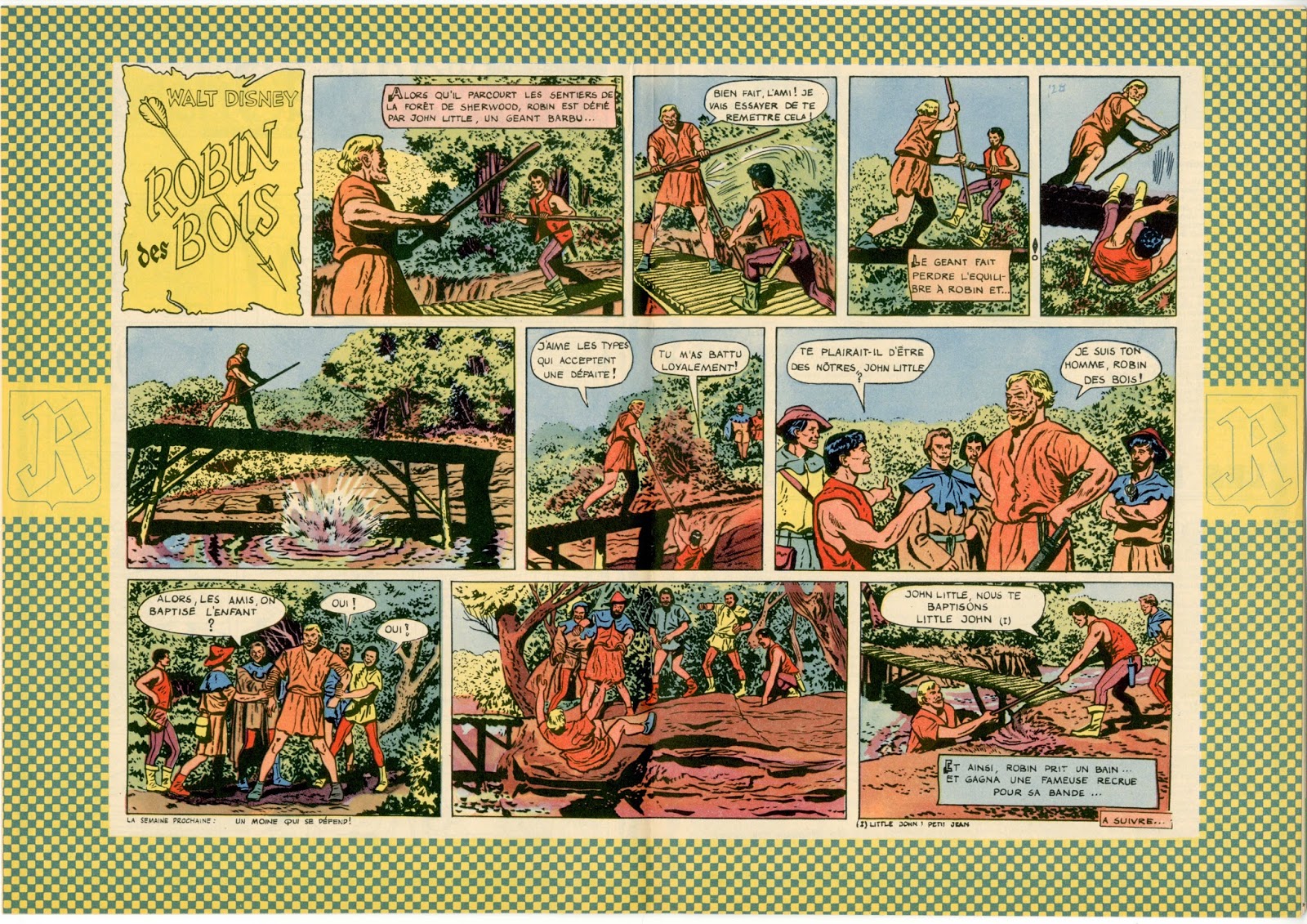 
Above is a lovely publicity still of Richard Todd as 'Robin Hood' and Joan Rice as 'Maid Marian' in Walt Disney's Story of Robin Hood and his Merrie Men. I discovered this on Ebay recently. The picture seems to have been taken either on set at the outlaws camp or during the romantic Whistle My Love sequence.

After the release of Robin Hood in March 1952, Joan Rice (1930-1997) was at the height of her popularity. In June of that year she spent eight days in Hollywood and then flew on to Fiji for the filming of His Majesty O'Keefe with Burt Lancaster. But sadly her film career soon declined. This site is dedicated to her memory and if you want to read more about her 'Cinderella-like' rise to stardom please click here.

Richard Todd's film and stage success would of course, continue. He made two more live-action films for Disney, Sword and the Rose (1953) and Rob Roy, the Highland Rogue (1953) and his acting career extended into the 1980's. He was named a Disney Legend in 2002.

A little-known fact is that Todd was author Ian Fleming's first choice to play 'James Bond' in Dr No, but due to previous commitments the role eventually went to Sean Connery.

There is now over 49 pages on this blog about Richard Todd (1919-2001) here and a vast collection of images from the movie here.

Christian has been extremely busy researching another of the actors that had a short role in Walt Disney's live action movie The Story of Robin Hood and his Merrie Men (1952). This time he investigates the life and career of Clement McCallin:

Clement McCallin plays the Earl of Huntingdon in The Story of Robin Hood and his Merrie Men (1952). A sadly underrated actor, his appearances could have been more developed in the film. As a matter of fact, he only appears in the first scenes before the departure for the Holy Land. I imagine the script writer Lawrence Watkin could have planned his return, together with his King. We only hear from him by Richard at the end of the movie when he tells Maid Marian that her father has returned and waits to greet her at Huntingdon. Happily, he sets the tone for the movie, being the first actor (with Louise Hampton) to appear in the first shot, as he prepares his horse before the departure. Clement does a very reliable, if too short, performance, both as Richard’s most trusted and noble knight and Marian’s father.

I have not found much about this distinguished-looking actor, except on IMDb, whose extracts appear below. It seems, according to his filmography, that he worked mostly for TV, with very few appearances in theatre and feature films.

1949
The Queen of Spades
Officer in the gaming room

1938
The Wooing of Anne Hathaway (TV Movie)
Will Shakespeare


Special thanks to Christian for the images and all this information on Clement McCallin. I agree with Christian, it is a pity that Clement didn't appear at the end of the movie as the Earl of Huntingdon and accompany his king into Sherwood Forest. It did seem rather odd that the monarch traveled alone. What do you think?

To read more about the lives of the actors and actresses in Walt Disney's Story of Robin Hood please click here.
4 comments: