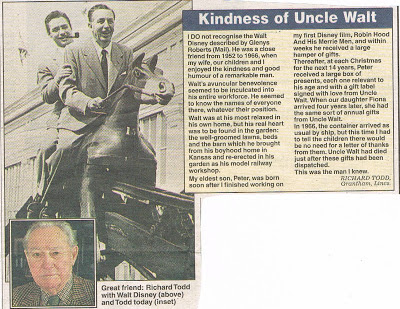 This wonderful letter (dated 10th December 2001) to the Daily Mail newspaper by the actor Richard Todd (1919-2009), was sent to me by our regular contributor Neil. It shows the strong bond between Walt Disney and the British actor had lasted long after he had completed his series of live-action movies for the legendary film producer. Unfortunately, I do not have the letter from Glenys Roberts that angered Richard Todd enough to make him pick up his pen. But this does show the affection that ‘Uncle Walt’ had for Toddy and his family:

"I do not recognise the Walt Disney described by Glenys Roberts (Mail). He was a close friend from 1952 to 1966, when my wife, our children and I enjoyed the kindness and good humour of a remarkable man.

Walt’s avuncular benevolence seemed to be inculcated into his entire workforce. He seemed to know the names of everyone there, whatever their position.

Walt was at his most relaxed in his own home, but his real heart was to be found in the garden: the well-groomed lawns, beds and the barn which he brought from his boyhood home in Kansas and re-erected in his garden as his model railway workshop.

My eldest son, Peter, was born soon after I finished working on my first Disney film Robin Hood and his Merrie Men, and within weeks he received a large hamper of gifts. Thereafter at each Christmas for the next 14 years, Peter received a large box of presents, each one relevant to his age and with a gift label signed with love from Uncle Walt. When our daughter Fiona arrived four years later, she had the same sort of gifts from Uncle Walt.
In 1966, the container arrived usual by ship, but this time I had to tell the children there would be no need for a letter of thanks from them. Uncle Walt had died just after these gifts had been despatched.

This was the man I knew. 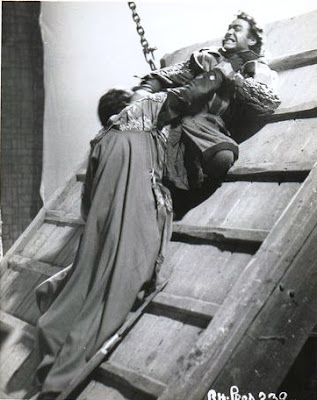 Peter Finch as the evil Sheriff of Nottingham and Richard Todd as Robin Hood grapple on the drawbridge of Nottingham Castle in this still from Walt Disney's live-action movie the Story of Robin Hood (1952). This is a particularly unusual image as the background seems to show a sheet hanging against the studio wall!

To see more stills and a lot more images from Walt Disney's Story of Robin Hood and his Merrie Men, please click here.

I was thrilled to receive this email recently from David Green, the first husband of movie actress Joan Rice (1930-1997).
It simply said:

"I am alive and well and live in Las Vegas. Joan and my son Michael died over 10 years ago in the South of France. His 2 daughters live in Holland.
David Green." 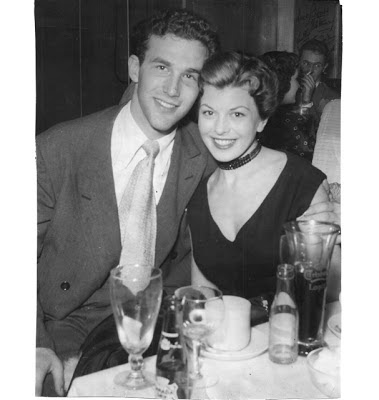 A week later David Green's wife sent me this lovely picture of Joan and David at their engagement in London. This must have been taken during the beginning of 1953 and quite possibly at The Kiss Korner club, which was owned by his father, the comic Harry Green. The Kiss Korner club encouraged the celebrities of the time to sign their autographs on the walls; if you look carefully in the top right hand corner some signatures can be seen.

There are now 57 pages dedicated to the life of Joan Rice, please click here to see more.