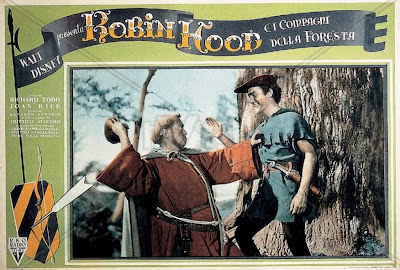 Above is another of the well illustrated Italian lobby cards produced  to promote Walt Disney's Story of Robin Hood and his Merrie Men (1952). It is interesting to see how the colour and tints of the costumes of both Richard Todd (Robin Hood) and James Hayter (Friar Tuck) have been changed by the designer.
1 comment: 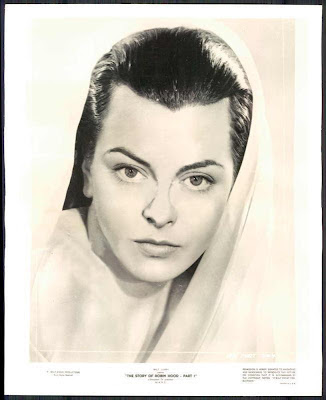 I am pleased to announce that the winner of our poll for your Favourite Maid Marian of all time is Joan Rice! She gained 53 votes. Close behind came Judi Trott from TV's excellent Robin of Sherwood (1984-86) with 51. 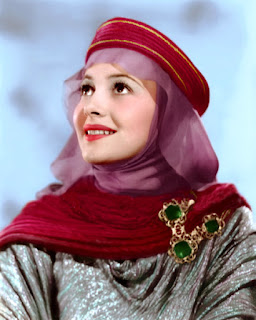 
Joint third is the lovely Olivia de Havilland from the classic Hollywood movie The Adventures of Robin Hood (1938) with Lucy Griffiths from the recent BBC series (2006-7). 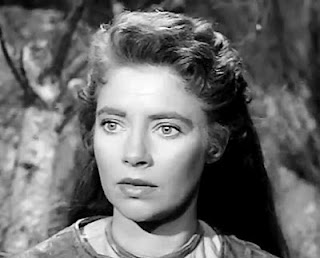 Next came Richard Green's love interest, Lady Marian Fitzwalter in the iconic TV series of the 1950's played by Bernadette O'Farrell with 13 votes. And right up to date comes Hollywood's modern interpretation played by Cate Blanchett with 12.

Patricia Driscoll received 9 votes. She had  continued the roll of Lady Marian in series 3 and 4 of  TV's Adventures of Robin Hood (1955-59) after the departure of Bernadette O'Farrell.

Legendary Audrey Hepburn returned to the screen after an eight year absence to appear in Richard Lester's Robin and Marian (1976) alongside Sean Connery.But she collected only 3 votes. 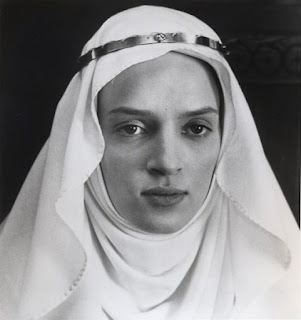 Both surprisingly on 2 votes are Uma Thurman from the gritty and very underrated Robin Hood (1991) and Sarah Branch from Hammer's Sword of Sherwood Forest (1960) which also starred Richard Greene as the outlaw hero. 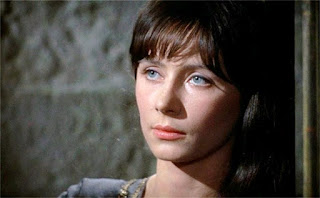 Gay Hamilton played Lady Marian Fitzwarren in Hammer Film's third version of the Robin Hood legend in 1967, but she only got 1 vote along with Anna Galvin from The New Adventures of Robin Hood (1997).

Sadly the other maidens were not voted for.

Thank you to all the readers who voted. We have now chosen Michael Praed as the all-time Favourite Robin Hood and we can place Joan Rice alongside him as Maid Marian. Who shall we pick as Friar Tuck?  Look out for the poll starting soon!

An Interview with Elton Hayes


Over the last few weeks we have had a great response to information on the late Elton Hayes. This week Neil has kindly sent me a link to a fascinating television interview with the folk-singer,which includes him describing working on Treasure Island and Robin Hood for Walt Disney. He also explains how he first learnt to play his legendary small guitar.

I am sure you will be impressed by the warmth and modesty of this sadly forgotten entertainer-and look out for the moment he listens to Whistle My Love on his cassette player. 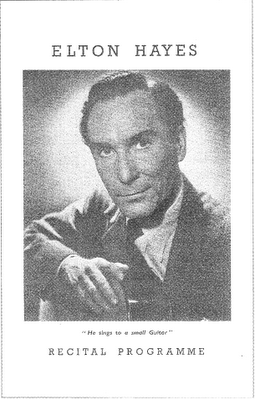 Over the last few years Geoff Waite has very kindly shared details of his research into the life and music of  Elton Hayes.  As regular readers of the blog will know Elton was a huge success as Allan-a-Dale in Walt Disney's live action movie the Story of Robin Hood (1952). Sadly today, Elton Hayes is almost completely forgotten.

A few weeks ago I uploaded a poster advertising Elton at the Liverpool Empire in the early 1950's and Geoff has added some more fascinating details about 'the man with the small guitar.'

"With reference to the poster of Elton Hayes at the Liverpool Empire, Neil was wondering about his stage act. I am attaching a copy of one of Elton’s programmes that provides details of some of the songs he featured in his regular act. As he was sharing billing with other artists at the Liverpool Empire, presumably Elton’s act was reduced to a much smaller number of songs on that occasion, so this programme would have been produced for his solo appearances around the country. 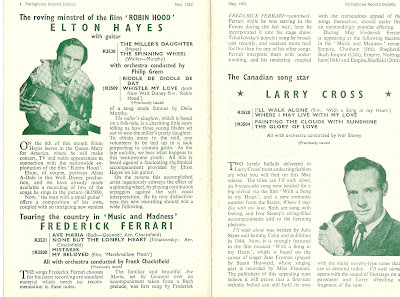 Neil is not far wrong when he says that the film left Elton as image goes in medieval mode, but I don’t think he would have minded too much. His live performances had always relied heavily on songs from the 18th and 19thcenturies even before he starting making records and Disney beckoned. He specialised in old English folk songs and ballads, arranging them himself to suit his distinctive singing style. Some of these he used to good effect when he appeared in the restoration play ‘The Beaux Stratagem’ during its 18 month run from 1949 at the Phoenix and Lyric Theatres in London. 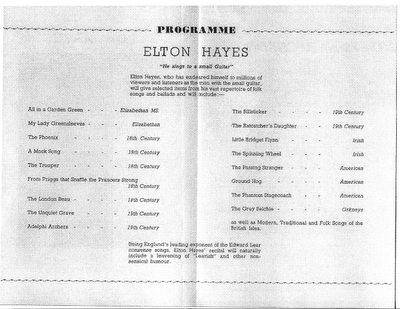 Some of the folk songs featured in the programme have been around for so long that they have acquired more than one title.  For example, ‘A Mock Song’ was recorded by Elton as the beautiful ’tis true I never was in love’ and ‘The Phoenix’ became ‘I Pass All My Hours’. ‘The Unquiet Grave’ is also known as ‘Cold Blows the Wind’ and rather more obviously ‘My Lady Greensleeves’ is just known as ‘Greensleeves’.

There is a small printing error. ‘Adelphi Archer’s’ should read ‘Adelphi Arches’. Perhaps Elton was thinking of his Robin Hood days!
Whilst the listing is mostly old folk songs I see that he was intending to include some….'Modern, Traditional and Folk Songs of the British Isles’ so I would like to think that Elton sang ‘Whistle my Love’ somewhere in his act. I am pretty certain the programme was printed long after the release of the Disney film. As he was also intending to sing some of the Edward Lear nonsense songs he recorded, such as ‘The Owl and the Pussy Cat’ it must have been quite a show, I wish I had been there!

Elton’s farewell concert was in Woolwich in November 1967 and then he retired from show business to farm and latterly he took up new interests in carriage driving and playing and composing music for the post horn. 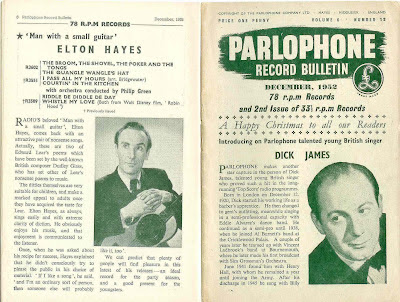 You mention Elton’s nineteen-city tour of the USA and Canada, and I am also sending you a couple of extracts from Parlophone Record Bulletins for May and December 1952. In the May edition, Parlophone mention Elton’s impending visit to America to promote Disney’s Robin Hood film. It confirms that he was due to sail in the Queen Mary on 8 May 1952. The ‘new’ Elton release the bulletin is promoting was ‘The Miller’s Daughter’ which is a folk song penned by Elton himself  In the December edition is a nice little comment by Elton about his recipe for success. The bulletins show just how popular Elton was back in the 1950’s."

A special thank you to Geoff for all his help in supplying information on the life and career of Elton Hayes. We now have 18 pages about 'the man with the small guitar' and of course he will always be our favorite Allan-a-Dale from that wonderful film. To see the many pictures, discography and life story of Elton Hayes please click here. 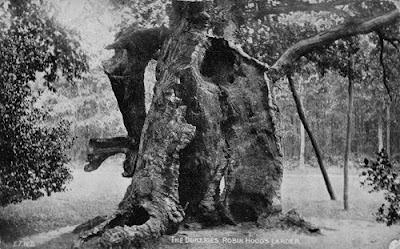 This rare postcard shows the ancient oak tree known as Robin Hood's Larder in 1913. It originally stood on land owned by the Duke of Portland where the ways of Sherwood Forest divided a mile and a half west of the Major Oak, in Birklands, near the village of Edwinstowe.

Local tradition states that Robin Hood and his men hid venison and game birds in the outer shell of the tree's hollow trunk. Sadly in the year that this photograph was taken, the tree was partly burnt by picnicking schoolgirls trying to boil a kettle inside it. Eventually it was supported with iron braces, but during the gales of 1962  the whole tree was completely blown down.
2 comments: 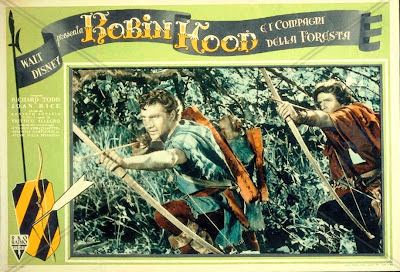 I think the Italian lobby cards for Disney’s Story of Robin Hood are the best I have seen. I particularly like the detail around the movie still as seen in the example above. They seem to be of a far better quality than the English and American lobby cards of the time. What do you think?
3 comments: