I am very grateful to Christian who has very kindly sent in information regarding the final resting places of five of the actors and actresses in Walt Disney's live-action movie the Story of Robin Hood and his Merrie Men (1952).

These pictures are tinged with much sadness as those stars have contributed such joy and happiness to generations of people. But I am sure you will agree that it is interesting to see where these screen legends were put to rest.

Together with Christian's images I have included pictures of Laurence's wonderful autograph collection to remind us of their wonderful roles in the Story of Robin Hood. 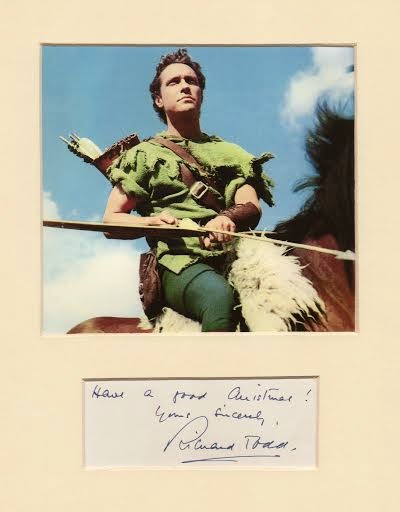 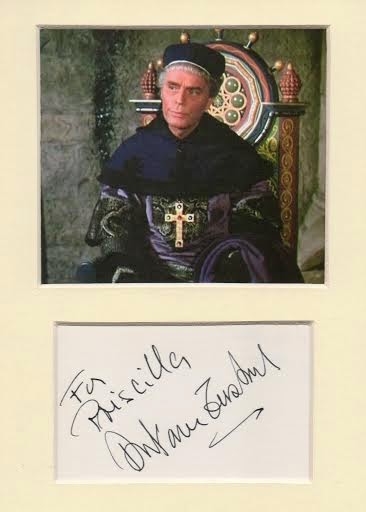 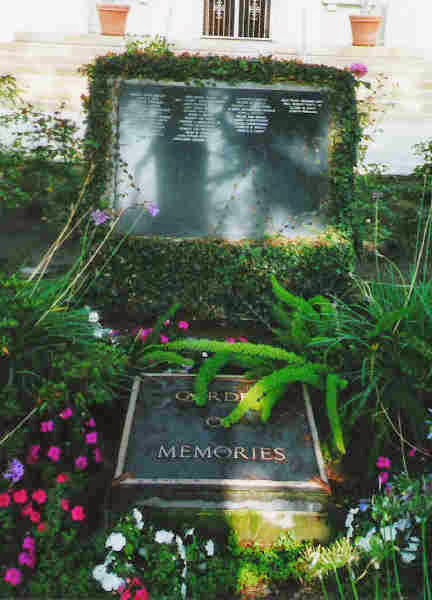 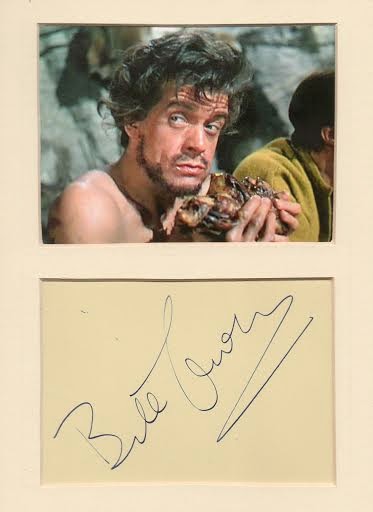 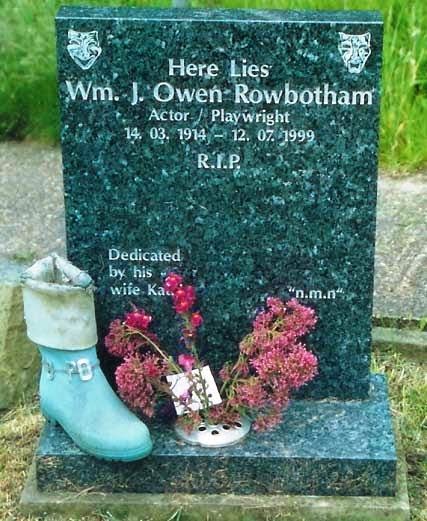 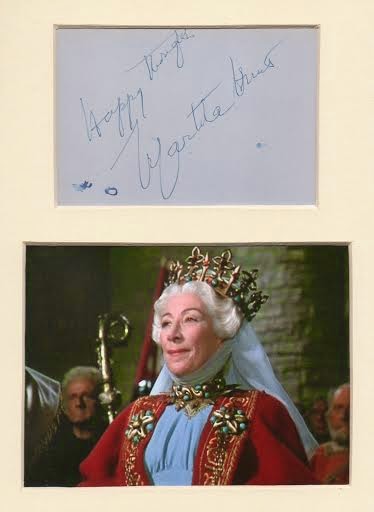 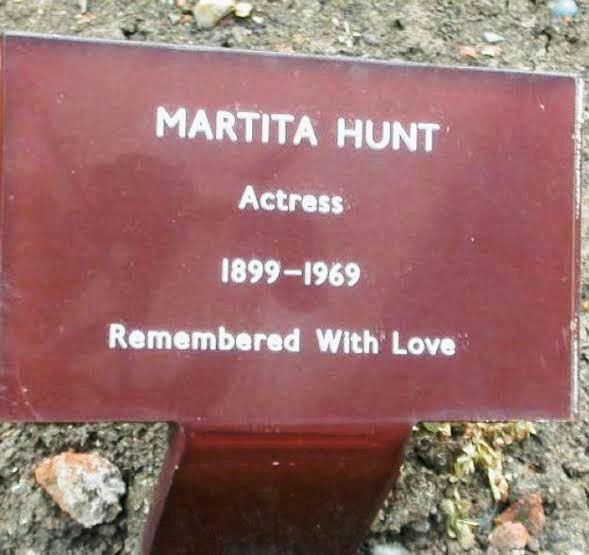 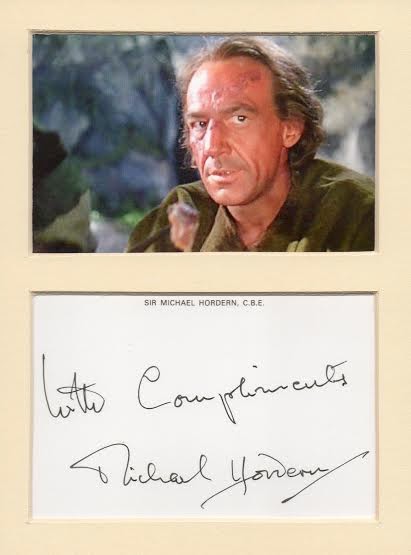 
To read more about the lives of the actors and actresses in Walt Disney's Story of Robin Hood and his Merrie Men please click on the relevant names in the side bar or below.

Special thanks to Christian and Laurence for their contributions to this website.
7 comments:

It is always a thrill to be sent information and details connected to the making of Walt Disney's live-action movie the Story of Robin Hood and his Merrie Men (1952) and the fascinating legend that inspired it. This blog is not produced for profit.

But someone wrote to me recently regarding their concerns about privacy and the publication of personal details. I would like to reassure all my readers and contributors that I never publish any personal information and will only pass on details if specifically asked to do so.
Thank you for you continued support.


We have recently looked at some wonderful comic strip art associated with Walt Disney's live-action motion picture the Story of Robin Hood and his Merrie Men (1952). I thought this time I would feature another set of beautiful illustrations based on the film. So at the end of this post is a YouTube video that includes not only a narration of the story but every page of the colorful story book that accompanied the Capitol Record 'Reader' Walt Disney's Story of Robin Hood. I think you will agree that the art work is delightful.

This double album with a 20 page booklet was originally released by Capitol Records in 1952 and was an adaption of the movie by Alan Livingston. 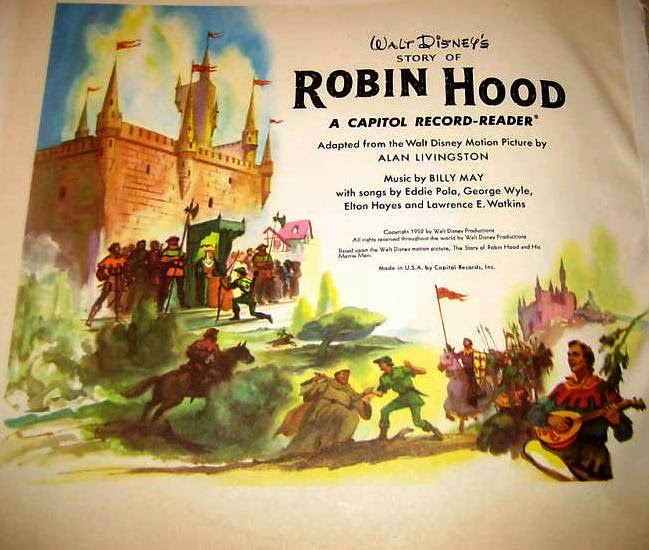 The Billboard from August 1952 announced:


This is certain to be treasured by the many youngsters who will be lucky recipients of the album. What is etched on the two discs is just part of attraction. Bound into the album is a superbly illustrated 20 page book telling the Robin Hood story as it is given on the records. It is an excellent adaption of the Walt Disney pic by Capitol exec Alan Livingston. Nester Paiva is the narrator and songs are contributed by Eddie Pola, George Wyle, Elton Hayes and Lawrence E. Watkins with Billy May conducting the work. All do fine jobs. Dealers who tie in with the runs of the movie should move plenty of copies; also the set is capable of doing well enough on its own. 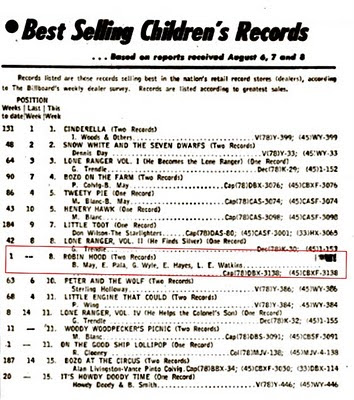 The movie had been released in New York on 26th June 1952 and the Billboard chart (above) was based on reports received for August 6th, 7th and 8th 1952. The records listed were those records selling best in American retail stores at the time.

Below is the video that includes the narration and artwork by Paterson and Simonson :


I have posted this article before about the comic strip of Walt Disney's Story of Robin Hood (1952), but since then I have discovered more examples of the excellent artwork of Jessie Marsh.

The Story of Robin Hood was the first Walt Disney live-action movie to be adapted to a comic strip. This was yet another way in which Disney was able to advertise his new releases and keep the film fresh in the audiences mind. Above is an image of the original artist and animator who worked on the Robin Hood strip, Jesse Mace Marsh. His strip version of the film ran for twenty five weeks, from 13th July till 28th December 1952.

Below are some examples of Marsh's fine illustrations:


Jesse was born in Florence, Alabama on July 27th 1907 his father was a small business contractor. From a very young age, Jessie had an interest in art and studied artists he admired in the local library and the museums. He was a self-taught and aspired to be a fine arts painter.

When Jessie was twelve years old his father moved the family to California, where in 1939 his son’s talents were first noticed and used by the Walt Disney Studio. He was involved in creating the studio’s animated classics, such as Pinocchio and Fantasia, but by 1945 he had also joined some fellow Disney artists in freelancing at Western Publishing.

1n 1947 he began drawing his main claim to fame - the Tarzan Comic for Dell (later Gold Key Comics), from the comfort of his new studio at his home. Other strips were created there, including Gene Autry, Daniel Boone, Davy Crockett and many more.

Below are a few colorized examples of his Robin Hood strip:

But Jessie remained intermittently working for Disney, which included drawing their Sunday newspaper strip that usually featured the current Disney movie as a tie-in. His first was The Story of Robin Hood which had been released in America a few weeks earlier. He began Robin Hood on July 13th 1952 through until December 28th 1952 and worked alongside the strip writer Frank Reilly.

It would be wonderful if Jessie's complete strip of Robin Hood could one day be released in book-form.
3 comments: