This photograph of Joan Rice (1930-1937) is said to have been taken in 1951 and has raised a number of questions. She is leaning against the British School of Motoring's Austin A40 Devon, a four door saloon. Had she just passed her driving test?

Joan played the part of Maid Marian in Walt Disney's live-action movie the Story of Robin Hood  and his Merrie Men (1952) and this blog is dedicated to her memory.We know from Ken Annakin's autobiography So You Wanna Be A Director that during the making of Robin Hood, Joan was cycling to Denham Film Studios in the early months of 1951. He says:


Joan used to ride a bicycle to and from the local hotel and between shots would go speeding around the Denham lot. Nearly every day she fell off and came back bruised and some part of her costume hanging loose. One evening I saw her standing forlornly outside the studio door, and took pity on her. "Where's your bike?" I called."Smashed up, as usual, she grinned guiltily..."


Also in the short promotional film The Riddle of Robin Hood we get a glimpse of 'our Joan' riding through Denham's security gate and into the studio grounds. So, was this just an advertisement for the British School of Motoring? Or did Joan pass her driving test after Robin Hood had been made? Perhaps one of our readers can help.
2 comments:


James Robertson Justice (1907-1975) will always be remembered for his booming voice, bushy beard and the larger than life characters he played in movies, such as his portrayal of Little John in Disney's Story of Robin Hood (1952) and as the bombastic head surgeon Sir Lancelot Spratt in Doctor in the House (1954).

After getting his big break into the movies (at the age of 37) through the help of Peter Ustinov, Jimmy gained a two year contract with the Rank Organisation and went on to become one of Britain's most recognized screen personalities, appearing in over eighty films. His early ones included:


The film producer Ken Annakin made several movies with James Robertson Justice and in his autobiography described how the big man could always be relied upon to add verisimilitude to any 'larger than life' character that he played. Annakin also recalled how the film crew would eagerly look forward to lunch-time breaks during the filming to hear more about Jimmy's exploits.

James Robertson Justice told of many amazing adventures that he had experienced during his early career. Tales like how he had joined the International Brigade against General Franco in the Spanish Civil War (where he gained a price on his head), or fled from Arabia on a camel after penetrating a Sheikh's harem. When the Germans marched into the Rhineland, Jimmy described how he had dropped his gun in front of Hitler. He also told how he had attended Bonn University and gained a doctorate in philosophy and a science degree at the University College London. He could speak three languages (later he increased it to twenty) -  and boasted about the fact that he was born under a distillery on the Isle of Skye in Scotland.

In fact JRJ seemed to have done more in a year than most of us do in a life time. He claimed to have become a professional racing driver, professional ice hockey player, worked for British Intelligence during WWII, was twice elected Rector of Edinburgh University, became friends with several members of the Royal Family taught Prince Charles how to fly falcons and was a notorious womaniser.

But how much of this was true?


Regular contributor Neil, runs a fantastic web site of his own, called Films of the Fifties, in which he often looks at stars of that golden era of movie making. This week he has included an article on James Robertson Justice  and using information from a latest biography on this larger than life character, reveals how behind Jimmy's mask there was a deeply contradictory and troubled man.

Although James Robertson Justice claimed he was Scottish (apparently he even played the bagpipes) his birth certificate shows he was actually born in the London borough of Lewisham and brought up in Bromley, Kent. At the age of 30 he added the 'middle name' Robertson to sustain the myth of his Scottish ancestry. Neither did he receive a doctorate in philosophy at Bonn University or a degree in science at University College in London.

So Neil's website Films of the Fifties unearths some of the truth behind those stories that JRJ loved to tell - and we learn a little more about the unrepentant socialist that drove a Rolls Royce and was a friend of the Royal Family. He was certainly a colourful character - one of a kind - and I am looking forward to reading the biography of our Little John.

Over the last few years, interest in my Disney's Story of Robin Hood Facebook page has been growing and there are now 41 members. One new member, Brian Varaday, has very kindly sent me another example of what has become known on this blog as Robin Hood's Chair.

Brian sent me a still from the movie The Dark Avenger (1955) which not only starred Errol Flynn, but also had many people involved in its production who would have been familiar with the chair when it was first used on the set of Walt Disney's Story of Robin Hood at Denham Studios in 1951. Actors such as Peter Finch, Michael Hordern, Ewen Solon, crew members Guy Green, Alex Bryce and technical adviser Charles R. Beard had all previously worked on Robin Hood.


It was while watching the classic television series the Adventures of Robin Hood (1955-1960) starring Richard Greene, that I noticed a familiar piece of furniture in the Sheriff of Nottingham's chamber. I was sure I had seen the highly decorated chair with its circular headrest and carved pineapples before.


I immediately paused the DVD and quickly grabbed my illustrated copy of Walt Disney's Story of Robin Hood and his Merrie Men. I was correct! It was the same chair that had been designed by Carmen Dillon and her art department for Disney's live-action movie in 1951. Somehow it had found its way to Nettlefold Studios and the ground-breaking set of the black and white television series.

As a young lad, these two versions of the Robin Hood legend had a huge influence on me. So you can imagine my surprise when I recently found, what I believe to be that very same chair (over thirty years later) in another all-time favourite of mine Robin of Sherwood (1984-1986).


I made a few enquires about this remarkable coincidence and received this message from a member of the Britmovie forum:

“I think it’s quite normal for props and costumes and even whole sets to be used in other films over the years. Studios normally had their own prop stores and there are also several large independent prop hire companies around London that have been on the go for years. I remember visiting one in Acton many years ago while helping a friend find some props for a theatre production; it was like an Aladdin’s cave with the proprietor cheerfully pointing out what other famous plays some of the props had been used for in the past.”

"I guess most of the props these days are located in private rental firms. In the old days before studios went four walls they contained huge prop departments on site. I know Pinewood had a massive prop dept so it’s not unusual for the same prop to pop up in many films and are now privately owned. I know when MGM Borehamwood closed they flogged a lot off in a huge auction and many went down the road to Elstree."

A while ago another regular blog visitor kindly sent me stills of those chairs being used in another movie, The Men of Sherwood Forest (1954). This was the first of a trilogy of Robin Hood features made by Hammer Film productions and also their first colour movie. Recently some critics have described it as the possibly the worst sound film about the outlaw ever made! Although in my opinion, American actor Don Taylor gives a good performance as Robin Hood and Reginald Beckwith is an excellent Friar Tuck in this low budget romp.

If anybody reading this blog, knows of any other movies in which the props (particularly those chairs) from the Story of Robin Hood can be clearly seen (and if they still exist) please get in touch!
4 comments: 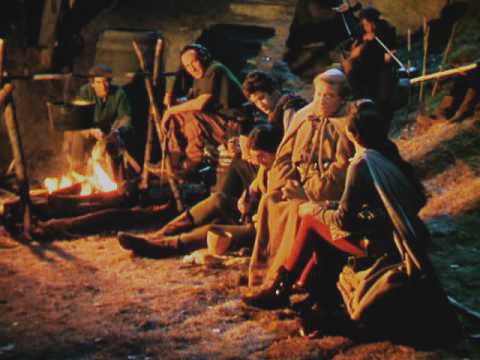 Maid Marian with Friar Tuck and some of the outlaws.

A fortnight ago I posted a favourite still of mine from Walt Disney's Story of Robin Hood and his Merrie Men (1952). It showed Maid Marian (Joan Rice) at the camp of Robin Hood surrounded by some of the outlaws. The image above was recently sent in by Neil and gives us another view of the scene, this time from a different angle. Looking at this picture, it is almost possible to feel the warmth of the camp fire and smell the cooking pot. This is yet another example of the artistry and fine attention to detail by the set designer, Carmen Dillon (1908-2000). 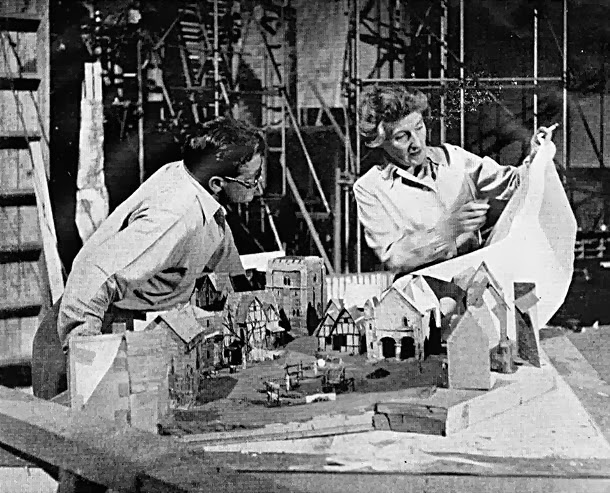 Four years ago, Neil sent me the article Prejudice and Slacks from The Cinema Sudio (November 1951) in which reporter Catherine O'Brien looked at the immense amount of research and work Carmen Dillon did on the set of Robin Hood. On top of all this of course, we must consider the fact that at the time she was the only woman to succeed in becoming an Oscar winning director. She overcame a huge amount of prejudice during her career at a time when no one in the film business would take a female art director seriously.

Below is an excerpt from the article Prejudice and Slacks: 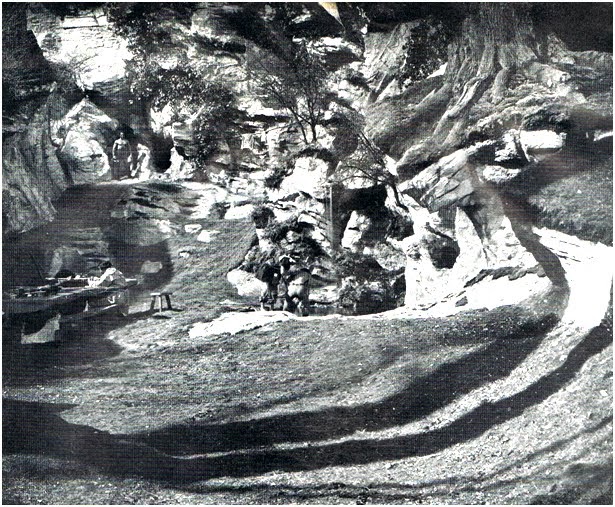 "One of the most important sets in the film is the Sherwood Forest camp where Robin Hood and his Merry Men live in outlawry, in their woodland hideout. Some weeks before the film, Carmen accompanied a research party including producer Perce Pearce, script writer Larry Watkin, and film star Richard Todd to Nottingham and returned laden with photographs of every relic of Robin Hood days, which would help her construct the original setting at Denham Studios." 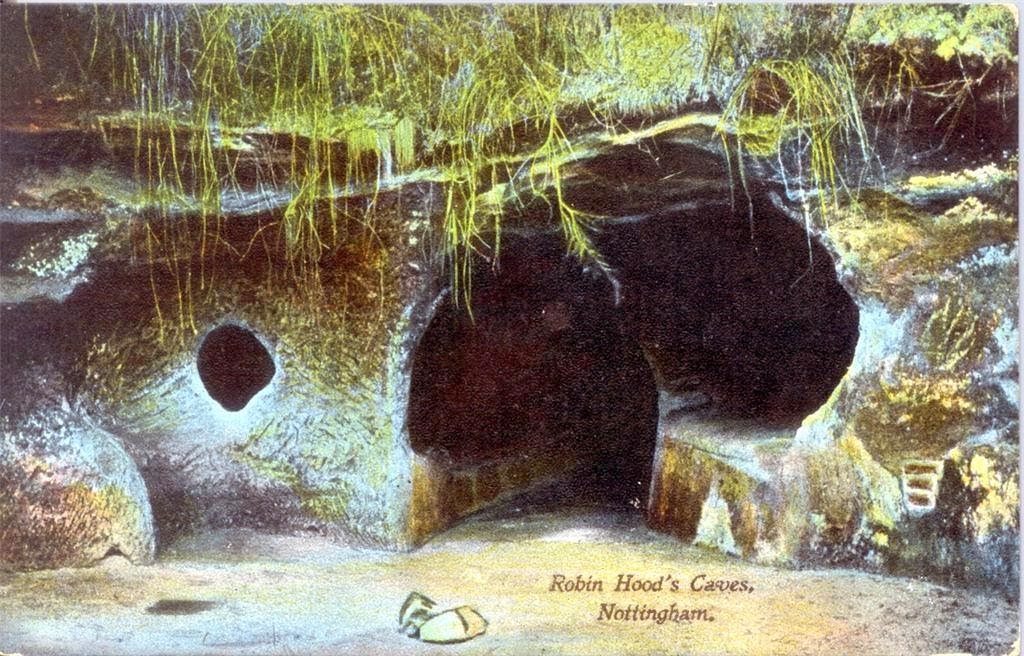 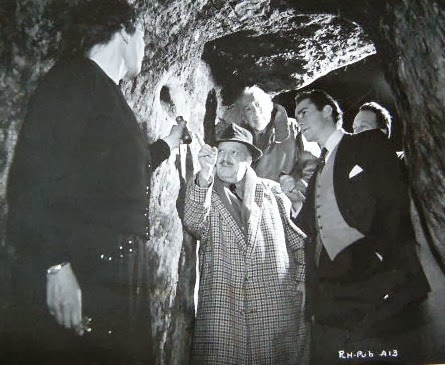 Larry Watkin, Richard Todd and some of Disney's research team.

"... the Robin Hood sets are sufficient to demonstrate the huge scale assignment tackled by Carmen Dillon on her latest appointment as art director and the great confidence placed in artistic talent by Walt Disney in the realisation of one of his most ambitious ventures."

To learn more about the life and career of Carmen Dillon and to read the fascinating article Prejudice and Slacks please click here. There is also a lot more information on Disney's research party and their look at the incredible caves and sites associated with the Robin Hood legend under the tag 'Film Production' here.