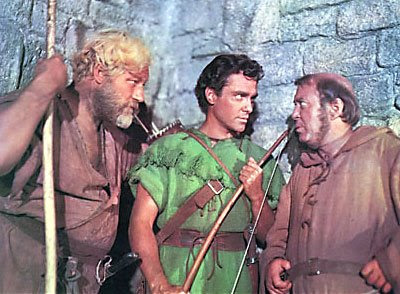 A regular favorite BBC television program of mine during the Bank Holidays of the 1970’s and early 1980’s was Disney Time. For a fan of the great film-maker, like me, this was an ideal opportunity to see clips of his classic work and forthcoming releases.

In the early days of television Walt Disney was of course, a great pioneer, and at a time when film studios feared the small screen, he was the first of the major Hollywood producers to venture into the ‘new’ medium. His very first one hour TV special was sponsored by Coca-Cola and was called One Hour in Wonderland. The show was aired by NBC in America, on Christmas Day 1950 and managed to pull in a massive 90% of the television audience. A year later he repeated this success with The Walt Disney Christmas Special.

Along with his brother Roy, Walt Disney now began to discuss a possible television series with NBC or CBS. But eventually a deal was struck with the third place, ABC Television network. Part of the package was a secured financial loan of $500,000 for the construction costs in Anaheim of Disney’s new project, a theme park called Disneyland.

On 27th October 1954, Walt Disney himself hosted the first of his weekly hour long programs for ABC, known like his forthcoming theme park, Disneyland. The show included various cartoons and material from the Disney Studio's vast family orientated library. The series was popular right from the start and soon became ABC’s first ever top ten show.

With Tinkerbell beginning each hour long episode with a wave of her magic wand, accompanied by the song ‘When You Wish Upon A Star’, the show would start from either, Adventureland, Frontierland, Fantasyland or Tommorowland. This would cleverly familiarize the television viewers with Disney’s up and coming ‘Magic Kingdom - his Disneyland park, which would open in July 1955.

Along with the classic Disney cartoons, educational shorts and film promotions, Disneyland also featured a number of mini-series, including True Life Adventures, The Nine Lives of Elfego Baca, Texas John Slaughter, Spin and Marty, The Swamp Fox and Davy Crockett. With Fess Parker as the historical American frontiersman, Davy Crockett was first shown in December 1954. Two more hour long episodes were aired in early 1955 and America was soon gripped with ‘Crockettmania.’ The Ballad of Davy Crockett became a chart topping hit record later that same year. The three Crockett episodes, shrewdly filmed in Technicolor, were edited into a full length feature film, which was then given a worldwide release in the summer of 1955, making millions of dollars in merchandising.

In 1958 the television series changed its name to Walt Disney Presents. The ABC loan was paid back and Disney now gained total control of his Magic Kingdom. But he had always been keen to progress into colour broadcasting, so in 1961 he moved his television show to the more technologically advanced NBC and Walt Disney’s Wonderful World of Color hit the small screens at 7.30pm on Sunday September 24th of that year.

It was on the 2nd November 1955, during the second series of Disneyland that the Story of Robin Hood was first aired. The feature film had been edited, like many at that time, into a two part television presentation, with the second part broadcast during episode 9 on the 9th November 1955. 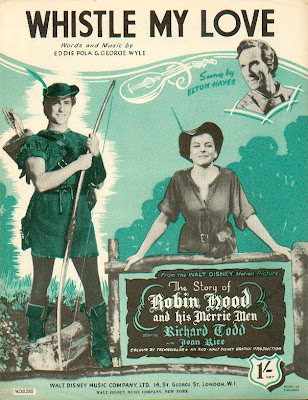 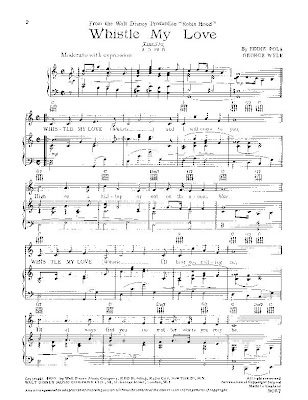 This is the music sheet of 'Whistle My Love' from my own collection, sung by Elton Hayes in Walt Disney's Story of Robin Hood (1952). It originaly cost one shilling. The song was composed by Eddie Pola and George Wyle and copyrighted as early as 1950.

(To see all posts about Elton Hayes please click on the label marked Elton Hayes in the right-hand panel or below).
9 comments: 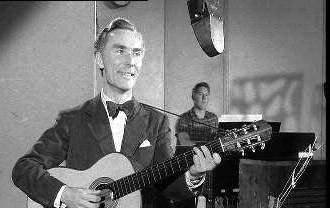 I was pleased to find, uploaded on YouTube, Elton Hayes singing a version of 'Whistle My Love' from Walt Disney's Story of Robin Hood (1952). I believe Elton Hayes was filmed by British Pathe recording this song in 1957 for a feature on British Cinema called Film Fanfare, which was introduced by Paul Carpenter.
To listen to 'Whistle My Love' just click on the music player in the right-hand column of the website.
2 comments: 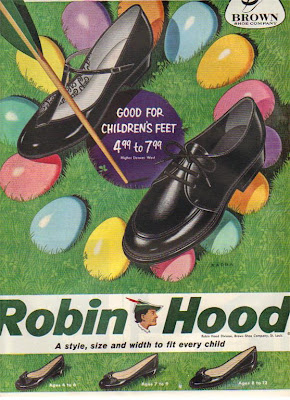 A very happy Easter to Neil, Christian and all my readers. Thank you so much for your input and I look forward to hearing from you all very soon.

The image above is an advert from Easter 1959 for Robin Hood Shoes!

Email ThisBlogThis!Share to TwitterShare to FacebookShare to Pinterest
Labels: Images of a Legend 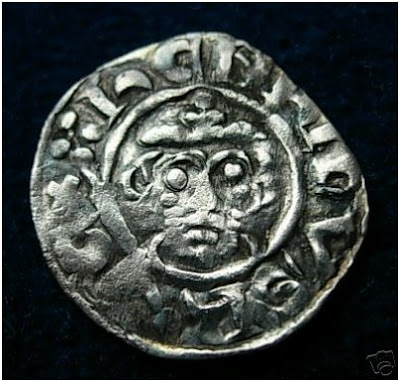 During Richard I’s (1189-1199) reign the only denomination struck was the Silver Penny. They are very rare. This partucular Silver Penny showing a stylised portrait of the king was minted in London by the monyer Stivene.

Email ThisBlogThis!Share to TwitterShare to FacebookShare to Pinterest
Labels: Richard I 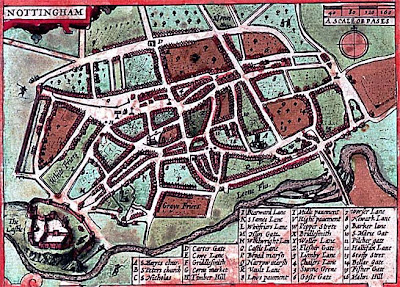 This the earliest depiction of the town of Nottingham, showing us the medieval layout that Robin Hood would have recognised. It is an engraving by the Flemish artist, Jodocus Hondius Sr. for John Speed's compilation of maps called 'The Theatre of the Empire of Great Britayne' (c.1611). It was in fact the first atlas of the British Isles. 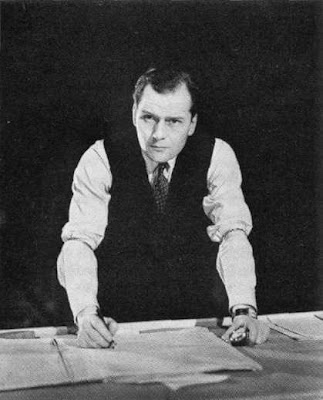 “Mathieson’s credits as Music Director reads like a history of the British films from the 1930’s to the 1960’s.”

James Muir Mathieson, the son of the painter and etcher John George Mathieson, was born in Sterling Scotland on the 24th January 1911. His early years were spent studying the piano at Sterling High School, where at the tender age of 13 he became conductor of the Stirling Boys Orchestra. He won a scholarship and studied composition and conducting at the Royal Academy of Music under Arthur Benjamin and Malcolm Sergeant. His career soon took off, when Alexander Korda signed him as Musical Director for London Films at Denham Studios, Buchinghamshire, in 1931. He later became Head of the Music Department at Denham.

Although Mathieson had worked as assistant musical director on Korda’s very successful The Private Life of Henry VIII (1933) his first credited film score was The Private Life of Don Juan (1934) which was composed by the Russian Mischa Spoliansky and Catherine the Great (1934). A year later he was responsible for introducing one of his teachers from the RCM, Arthur Benjamin and they collaborated on the excellent score for Korda’s The Return of the Scarlet Pimpernel (1937).

His first cinematic triumph came when he persuaded Arthur Bliss to compose music for Korda’s celebrated production of the H.G. Wells film Things To Come (1936), which was later successfully released on a 78 rpm gramophone recording.

"The music is a part of the constructive scheme of the film."
(H.G.Wells)

In 1935 he deputised for Sir Malcolm Sergeant and conducted performances of Hiawatha at the Royal Albert Hall. It was there, amongst the massive cast, that he met his future wife, the ballerina Hermione Darnborough. They later lived in a beautiful old farm house, just a few miles away from Denham Studios and had four children.

He continued to direct the music scores for an incredible amount of major releases and was recording part of the soundtrack of The Four Feathers, when in March 1939 there was a royal visit by Queen Mary to the Denham Studios. It was there that she watched him conducting three choirs; while scenes from the film was projected over head. In five years Mathieson had put British film music firmly on the map, although he was said to have regarded American studio composers and musicians as technically more advanced.

His wartime service was spent busily working for Arthur Rank at Denham, the Film Centre, Crown Film Unit, the BBC and the Army, Navy and Air Force Film Units.

Although Mathieson was described as a ‘Music Director’ he also conducted many radio and theatre scores during this period, including the stage version of Tolstoy’ s War and Peace, the music for Alan Burgesses The Passing of Crab Village and the very first music film recital at the Stoll Theatre in 1943. In 1944 he conducted a full season at the Saddlers Wells Opera. But he mainly remembered as the most prolific conductor in British films. One of his single most important works was his music for the film Dangerous Moonlight (1941) which included Addinsell’s Warsaw Concerto which was played on the film soundtrack by pianist Louis Ketner with Mathieson conducting the London Symphony Orchestra. His work with the London Symphony Orchestra went on to include William Walton’s music for Laurence Olivier’s Henry V (1944), Hamlet (1948) and ‘Oliver Themes’ by Arnold Bax for David Lean’s Oliver Twist (1948). Mathieson also found time to direct Benjamin Britten’s film, Instruments of the Orchestra in 1946.

In the early 1950’s Mathieson worked for Walt Disney on his British made live-action movies-often as Music Director and Conductor of The Royal Philharmonic Orchestra. He collaborated on many occasions with the composer Clifton Parker (whom he had discovered) and together they musically scored such classics as Treasure Island (1950), The Story of Robin Hood (1952) and Sword And The Rose (1953). Mathieson also worked on Walt Disney’s Rob Roy (1953), Swiss Family Robinson (1960) and also uncredited on Kidnapped (1960). He went on to compose music for movies such as Circus of Horrors (1960), Hide And Seek (1963) and Crooks Anonymous (1962).

As Musical Director, Mathieson was nominated for an Academy Award along with Larry Adler for the Genevieve (1953) score and in 1957 he was awarded an OBE.

In 1969 Muir Mathieson became conductor of the Oxford County Youth Orchestra originally founded by his brother John a year earlier. He held this position until his death in Oxford on 2nd August 1975.

Described as the ‘doyen of British film music,’ Mathieson’s importance can not be over-stated. He was the music director for over 600 films and about 400 shorts. He was responsible for introducing some of the most famous British composers such as Arthur Bliss, Vaughan Williams, Arnold Bax, William Walton and Malcolm Arnold, to the composition of orchestral scores for films.

"All that remains is for it to be unreservedly recognized that music, having a form of its own, has ways of doing its appointed task in films with distinction, judged purely as music, and with subtlety, judged as a part of a whole film. It must be accepted not as a decoration or a filler of gaps in the plaster, but as a part of the architecture."

Email ThisBlogThis!Share to TwitterShare to FacebookShare to Pinterest
Labels: Behind The Camera, Denham Studios, Film Production 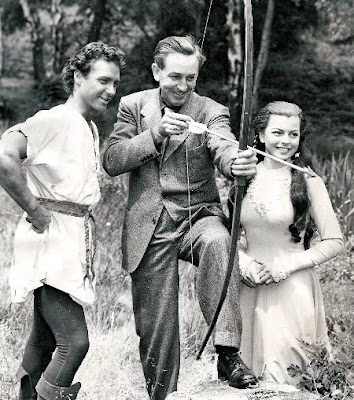