Richard the Lionheart in Sherwood Forest

Because of several projects that I am currently working on, (including a novel) my blog has been slightly neglected over the past few months. But I am desperately trying to catch up with some of the fascinating information sent to me by some of my readers.
Albie has sent some wonderful facts about the history of Sherwood over the last few years and there are still more for me to upload. But this post was kindly sent in by Trish about the early boundaries of the Royal Forest of Sherwood. She was inspired to write this because of a small anecdote in Manwood’s Treatise of the Forest Laws (1598) that mentioned Richard the Lionheart hunting in Sherwood Forest:
“I have seen many ancient records in the tower of Nottingham Castle very badly kept, and scarce legible; in which Castle the Court is usually kept for Peverill-Fee: Amongst which it appears, that in the year 1194, King Richard being hunting in Sherwood Forest, did chase a hart out of the forest into Barnsdale into Yorkshire; and because he could not recover him, he made a proclamation at Tickhill in Yorkshire, and at several other places thereabout, that no person should kill, hurt or chase the said Hart; and this was afterwards called a Hart-Royal Proclaim’d.”

The Royal Forest of Sherwood

I was intrigued by this because the first official description of the boundary of the Royal Forest was completed in 1218 and showed that at its most northern point, Sherwood stretched 20 miles from Nottingham as far as the River Meden. Barnsdale of course is in Yorkshire a great deal further and quite a jaunt on horseback even for Richard the Lionheart! But Trish has completed some detailed research about Sherwood’s earlier size and below is her interesting and important discoveries about the original ‘Forest of Nottingham.’

'Some weeks ago you mentioned the anecdote from Manwood’s Forest Laws about how Richard I hunted a hart from Sherwood to Barnesdale, and wondered at the distance he covered.  This got me thinking about the forest boundaries, for it is generally accepted that the northern boundary of medieval Sherwood was the river Meden.

This boundary was formally established in the perambulations and inquisitionsarising from the 1217 Charter of the Forest. But where was the boundary before then?

During the reign of Henry I, the eastern boundary of the forest (known then as the ‘old forest’ or ‘the forest of Nottingham’) ran from the place where the Doverbeck joins the Trent, and followed the douerbek, thence to cuningeswað and then north to bikeresdik, near the Yorkshire border.  This includes the region north of the Meden known as Hatfield.  This boundarywas indentified early in the reign of Henry II, when the Archbishop of York requested that his Nottinghamshire lands, almost all of which were east of the Doverbeck, to be exempt from forest law.  He justified his request by claiming that they had not been part of the forest during the reign of Henry I.  (The record of the Inquest is appended in Crook, 1994).
But this inquest was held in the first or second year of Henry II’s reign, which suggests that it was during King Stephen’s time – the Anarchy – that forest laws began to be enforced east of the Doverbeck, in the region known as the Forest of Clay.  This is odd, for it is generally recognised that forest laws were only haphazardly enforced during the Anarchy, and some forest land was simply reclaimed by the inhabitants and landholders (Crook, 1994; Poole, 1955).  Further, shortly after becoming king, Stephen, in a charter of liberties, agreed to disafforest all lands that Henry I had afforested while maintaining those forests created by William I and William II. This suggests either that Stephen wasn’t successful in disafforesting the area of Hatfield, or that the region had already been subject to forest law under William I or II. 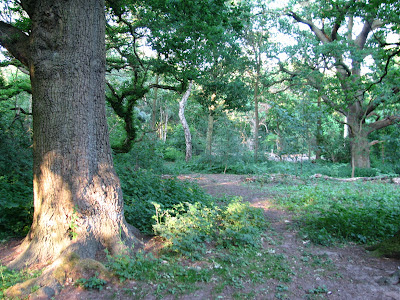 And in a writ following the charter of liberties, in which the canons of Southwell were granted exemptions from forest laws, it was stated explicitly that their lands were within the forest  (Crook 1994).  If anything, the size of the forest should have been reduced during Stephen’s reign, but in this case it wasn’t. Perhaps William Peverel was overzealous in enforcing the forest law and took a few liberties?  The interestingthing is that the canons were only granted exemptions – the possibility that their lands were outside the forest was not recognised by the king.
So at the opening of Henry II’s reign, it would appear that the area known as the Forest of Nottingham, as well as at least a portion of the Forest of Clay, were already subject to forest law despite the grumbles of the Archbishop of York.
Further evidence shows that all of Nottinghamshire north of the Trent was subject to forest law during the reigns of Henry II, Richard I and John.  The Pipe Rolls from these reigns (specifically1167-1212) record the penalties imposed on vills in the forest eyres.  (This information comes from an unpublished MA thesis which I would love to get my hands on).   The region subject to forest law included all of Nottinghamshire north of the Trent and possibly some to the southeast, and extended into eastern Derbyshire aswell. 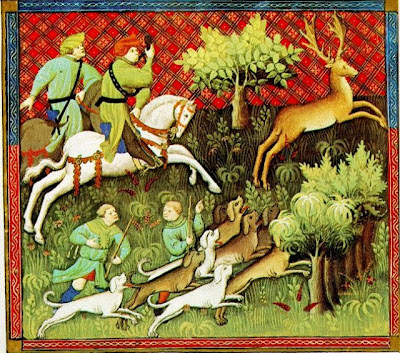 Hunting in the Forest

So, when Richard I chased that hart from Sherwood to Barnesdale, he may not have had all that far to go.  The distance from Blyth to Barnesdale is about 20 or 25 miles – no more than a bracing race for an extraordinary man like Richard the Lionheart. He seems to have been gracious about not catching the beast, at least!
Regards,
Trish '
Crook, David.  “The Archbishop of York and the Extent of the Forest in Nottinghamshire in the Twelfth Century.”  In George Garnet and John Hudson, eds., Law and Government in Medieval England and Normandy: Essays in Honour of Sir James Holt.  Cambridge University Press, 1994.
Liddell, William Hetherington.  “Some Royal Forests North of the Trent, 1066-1307. Unpublished MA Thesis.  University of Nottingham, 1961. 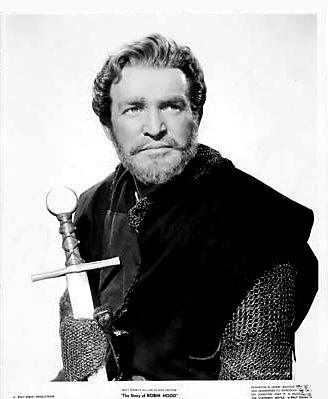 Patrick Barr as Richard the Lionheart

This is groundbreaking research by Trish and I would like to thank her very much for allowing me to post her work.
I wonder what other manuscripts were left decaying in that tower at Nottingham Castle? But at least we do know that after his return from the Holy Land, King Richard did visit Sherwood Forest and also Robin Hood’s other traditional haunt - Barnsdale in Yorkshire. 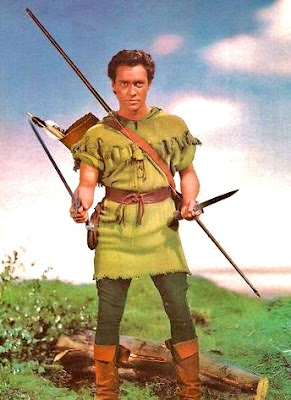 I’m back posting now after a lovely holiday and would like to thank Mike for sending in a great colour publicity still of Richard Todd as Robin Hood from the Disney live-action movie.
6 comments: