Above is a rare publicity shot from Walt Disney's live-action film The Story of Robin Hood and his Men Men (1952). It was recently available on-line and shows Clement McCallin (1913-1977) as the Earl of Huntingdon and Joan Rice (1930-1997) as his daughter Maid Marian.

The press information attached to the still says:


Clement McCallin as the Earl of Huntingdon, life long friend of King Richard the Lionheart, and Joan Rice as his daughter Maid Marian, in Walt Disney's all-live-action Technicolor production "Robin Hood". The film which stars Richard Todd in the title role, is produced by Perce Pearce at Denham Studios for world distribution by RKO Radio.

There is hundreds of images from the movie on this site and many can be seen in the Picture Gallery here .

84 pages on the life and career of Joan Rice can be accessed by clicking on her name above and in the task bar. 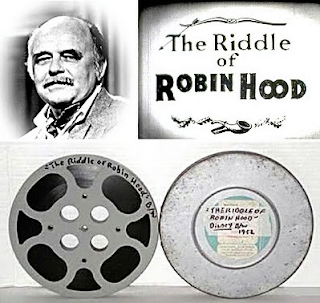 I last posted about The Riddle of Robin Hood over eight years ago.  Since then, I have discovered more fascinating information about the making of this little film.

Bill Crozier Walsh's (1913-1975) career with Walt Disney began in June 1943. Initially he started as a joke writer and publicist, which led to work on the syndicated Micky Mouse cartoon strip. But this portly, cigar chomping New Yorker would later become one of the most successful producers in entertainment history.

Disney soon noticed Walsh's talents in publicity and put him in charge of the studios first television production, One Hour in Wonderland which aired on Christmas Day in 1950. Walsh recalled Disney inviting him into his office and being told that he had decided to "go with television and that he was the guy that was going to do it."

Walsh was stunned and said, "I don't know anything about television." But Disney just grinned and said, "that's o.k. nobody does!" Walsh remained convinced this new venture was doomed to failure. So he wrote an urgent memorandum to Disney warning that the studio should avoid small screen productions at all costs.

The note didn't work and ironically Disney's television debut was such a success that Walsh was then hired as head of all the studios television productions. These included the hugely popular series Davy Crockett, The Adventures of Spin and Marty, The Mickey Mouse Club and The Hardy Boys.

When the studio began planning their second live-action movie The Story of Robin Hood and his Merrie Men in 1951, Disney invited Walsh over to England. When he inquired as to what his role would be, Walt replied:


"There's a funny little magic word called 'initiative', and that will tell you what to do."

Once in England, Walsh put his instinct as a publicist to good use and conceived the idea of 12 minute promotional film about the making of this new Disney's live action movie. He called it The Riddle of Robin Hood and it included details about the research that the studio had made into the ancient legend and backstage production scenes. 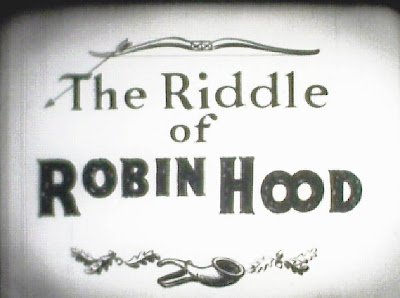 The Riddle of Robin Hood was shown in schools, cinemas and TV stations all over the country. Walsh described Disney as being delighted because:


"We were getting a lot of mileage out of this goofy little film and Walt was sort of enchanted by all that free space promoting the film."

Whilst browsing the Chronology of the Walt Disney Company many years ago I discovered, under the year 1952, a mention of The Riddle of Robin Hood. It simply said-under, month unknown, “Disney releases the film The Riddle of Robin Hood for promotional use [501.470].” I immediately emailed the owner of the web site, but he later confessed that he knew very little else. So I put an appeal on this blog in September 2007 for anyone that might have seen this mysterious film.


Eventually Neil contacted me and revealed that he had acquired a copy of this very rare film. This was fantastic news! It was produced by the Disney organisation to promote their second live-action production The Story of Robin Hood (1952). It is not only an amazing piece of cinematic history - but also of Disney history.

Today, Walsh's 'goofy little film' gives a fascinating insight into the Disney studios live-action production of Robin Hood.  It takes you behind the scenes, right from the early research, the planning stages, set construction and on to the filming at Denham Film Studios in 1951. So you can imagine my surprise when I received this message from Disney expert Bill Cotter a few years ago:


“I just saw your post on this film and wanted to share what I wrote about it for my book The Wonderful World of Disney Television:

'Another project during this time also helped to confirm Walt's feelings about using television to promote his theatrical releases. After World War II, the Studio made several films in England to use funds being held there. Walt took Bill Walsh with him to England during the filming of The Story of Robin Hood and His Merrie Men, a 1952 release starring Richard Todd. Walsh's assignment was to produce a behind-the-scenes look at the making of the film, and he took the unusual approach of questioning Robin Hood's actual existence. The resultant 12-minute film, The Riddle of Robin Hood, was Walsh's first live action film. The Studio wasn't quite sure what to do with it, and as Walsh later retold it, they decided to give it away for free to anyone who was interested in it:

"In those days, naive was the word for the TV people. They didn't know what to do - they had to fill up a lot of time all day long, but they didn't have the stuff. We planted this film with a lot of TV stations all over the country, planted it with schools, because it had kind of a documentary feel about it. So pretty soon we were getting a lot of mileage out of this goofy little film. Walt was sort of enchanted by that, all that free space promoting the film, so the next year the networks came in and wanted Walt to do a TV show, and he was sort of spooky about it. I think he had had a bad experience on radio using the voices like the Duck and the Mouse. Nobody could understand it and the show wasn't successful, so he was a little leery about doing a TV show."

While it wasn't originally planned as a television program, The Riddle of Robin Hood certainly served the purpose of proving once again that television and films could happily co-exist.'

(Bill Cotter)
Below are two more screenshots from The Riddle of Robin Hood.


After several years in television Walsh switched to live-action films. He was either a writer, co-producer and producer on such memorable Disney productions like Mary Poppins, The Absent Minded Professor, That Darn Cat, Black Beard's Ghost, One Of Our Dinosaur's Is Missing, Bedknobs And Broomsticks, The Love Bug and Herbie Rides Again.


"one of the most gifted men ever to have worked for Disney-deft with language and humour."