Down the years Neil has contributed a vast amount of information to this blog and also has his own wonderful website dedicated to the Films of the Fifties.  He has recently discovered a fascinating article about the making of Walt Disney's Story of Robin Hood (1952). It includes this very rare image (above) and an article about the training given by Rupert Evans for the fight scenes in the movie.


There is a new photograph [above] there of Richard Todd and James Robertson Justice rehearsing for the quarter staff fight - it is not much of a picture BUT it is yet another find ... If you look at the cart to the left - that appears in a scene where Little John  trots across with the horse that Peter Finch is going to be placed on. That was quite a set of Robin Hood s camp - I remember Ken Annakin saying that it was at least 200 ft. wide which is massive.

Look closely at the picture though and it underlines - something I have said so often - how good the set is. It looks like real woodland.

The picture above also reminded me of another image we  have seen of Richard Todd and James Robertson Justice preparing for the quarter-staff fight scene.

Neil describes the magazine article in which the picture appeared:

This article appears in an American Publication of August 1952 called 'Boys Life' and this is towards the back of the magazine which would come out just after the July 1952 release of The Story of Robin Hood in America. We had it in Feb or March of 1952 as you know..

This is what the article says:

When you see the new Walt Disney RKO live-action film, THE STORY OF ROBIN HOOD - and don't miss it- you'll see hand-to-hand combats in which the actors used no doubles. Robin Hood, legendary fighter of freedom, is most famous as an archer, and the film does have some eye-popping shots with bows and arrows. But Robin and his men could also bloody the heads of tyrants with their fists, knives, swords cudgels or six foot long  quarter-staves, a speciality of the period (for the movie about 1190 A.D.)

That was the time when the good King Richard the Lionhearted, left England for the Holy Land, and his weak, greedy brother, Prince John, oppressed the people. For resisting, Robin Hood and his followers were outlawed, but they hid in Sherwood Forest, raiding and  making fools of Prince John's men. For the numerous action scenes the actors were trained by a former coach of the British Royal Marines. Richard Todd, as Robin Hood, mastered all the weapons. Todd would be a tough man to tangle with now, even if he didn't have a quarter staff along.


Back in 2010 I posted about the Tough Guy Agency. This was the organisation that supplied stunt men and fight-training for films like The Story of Robin Hood and other action films of that period. I found the article in the Super Cinema Annual 1954. It featured a piece on Mickey Wood (1897-1963) the self-defence and physical training expert who was manager of the agency Tough Guys Limited which provided stunt people for films, including Disney’s Story of Robin Hood (1952). Perhaps Rupert Evans was connected to this company. This is the piece from the annual:

"Through the leafy green thicket of Sherwood Forest came a wiry little man on a shaggy forest pony. Without pausing, the rider galloped the pony straight into a wide and deep stream which cut its meandering way through the trees. The spray shot up around them, hiding them from view for an instant. Then came the deep twang of a bow string. A long slender arrow sped through the air. With a sickening thud, it caught the rider full in the chest, even as he reached mid-stream.

He threw up his arms and fell from the pony, to land with a splash in the water. The frightened animal was left alone to struggle to the other side. The body of the man floated downstream, face upwards, arms outstretched, with the deadly arrow sticking up from his chest for all the world like a sail-less mast of some stricken ship-

Well it was taken from ‘Robin Hood,’ that wonderful R.K.O. film which so faithfully portrayed the adventures of England’s ever-green hero of Sherwood Forest.We went to interview Mickey Wood and found him in his office in Wardour Street, the centre of all the world’s film companies in England. He is a quiet, unassuming man in his early fifties and his office walls are filled with pictures of the many hair-raising stunts which his own tough experts have performed, or have taught well known film stars to do.

Yes we can hear you saying, “I suppose that was a dummy which a good marksman shot off the pony. It was jolly well done though.”

It certainly was well done! But that dramatic scene was no fake-the man on the pony was alive and surprisingly enough, has lived to perform many other daring stunts. For the rider was none other than Mickey Wood, principal of the ‘Tough Guys Stage and Screen Agency.’


And yet Mickey had an operation when he was a boy which would have been enough to kill many people, if not make them permanently disabled. He was trepanned and to this day [1954] he carries in his head a silver plate as a grim relic of this operation.


But Mickey Wood refused to let this put him off. At school he became the schoolboy boxing champion, took up wrestling and self defence and later on became the light-weight champion of Great Britain. Besides self-defence, he became an expert in swimming, diving, swordsmanship and riding.

During the last War, Mickey taught the Commando troops all he knew about self-defence and many of them must have found that knowledge invaluable when they came to grips with the enemy.


Today, his ‘Tough Guys Agency’ has about three hundred and fifty people on its books, all of them experts in their various ways-ranging through boxers, wrestlers, high-divers, fencers, archers, car-crashers, circus acrobats and many other “tough guys.” But not only men-for Mickey has a number of extremely able young ladies who are willing to risk life and limb in the cause of stunting.

Micky’s first film-fight came in a film of George Formbey’s called ‘George in Civvy Street,’ when he worked with Kid Lewis, the famous boxer. Recent films in which Mickey has taken part are ‘Robin Hood,' already mentioned, ‘High Treason,’ ‘The Wooden Horse,’ and ‘Ivanhoe.’ The latter being the most spectacular and the one in which a big team of Mick’s people were engaged.

They had to leap from the castle battlements. Take part in fierce fights with swords, maces and all amidst clouds of arrows. But don’t run away with the idea that the fights such as you see here are haphazard affairs-not a bit of it!

These stunt men and women are tough, but they have no wish to throw their lives away just for the sake of a good picture. Every fight is carefully rehearsed and, very often, when two men are engaged in combat, practically every blow is planned beforehand. This is absolutely necessary; otherwise it could easily lead to serious injury or perhaps the death of one of the combatants."

Thanks to Neil for sending in the Boys Life article.

Email ThisBlogThis!Share to TwitterShare to FacebookShare to Pinterest
Labels: Behind The Camera, Picture Gallery, Rupert Evans 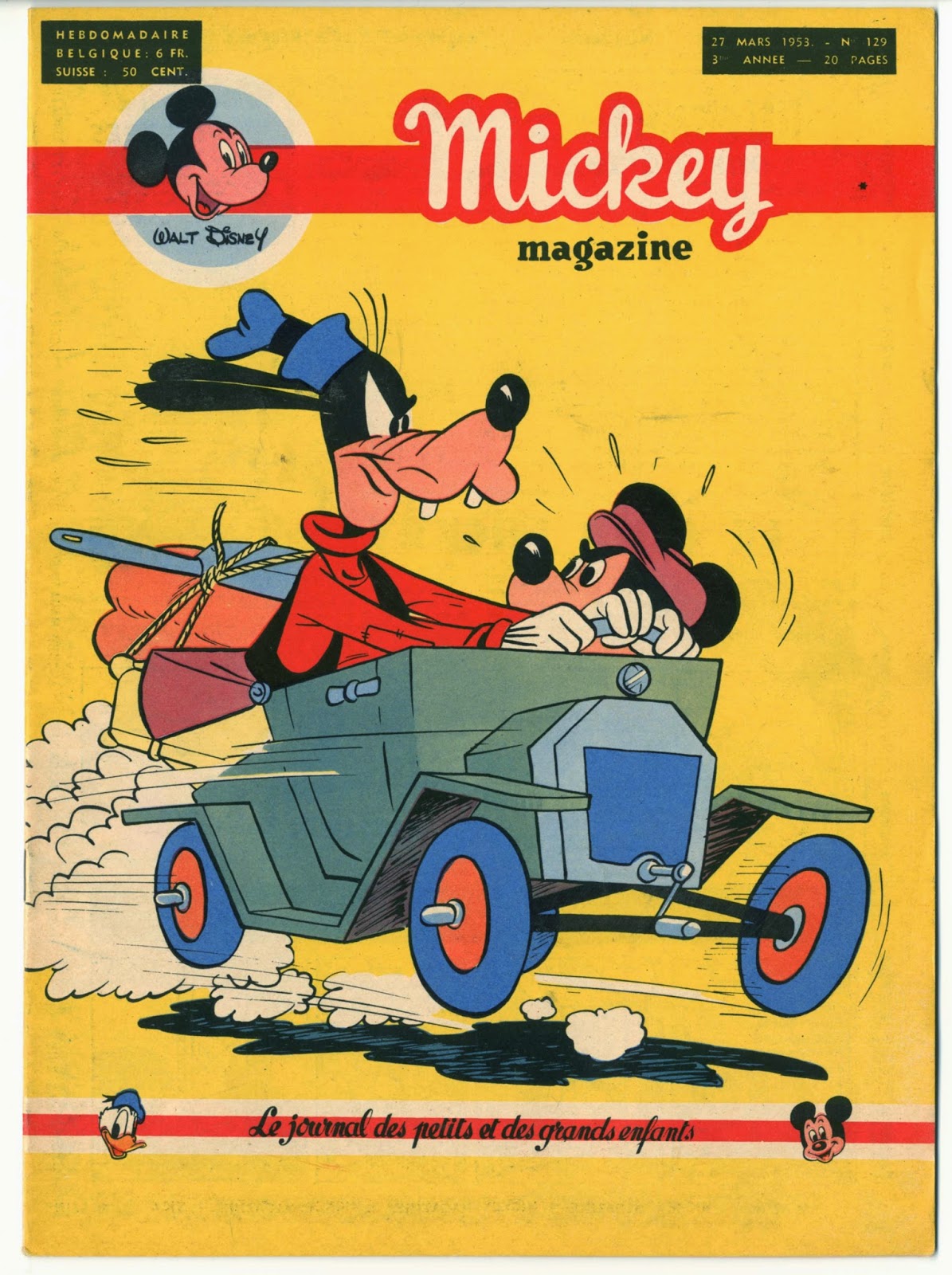 This is part six of the Robin Hood strip that appeared in the Belgian comic Mickey during the 1950s. It was based on Walt Disney's wonderful live-action movie The Story of Robin Hood and his Merrie Men which was released in 1952 and starred Richard Todd, Joan Rice, Peter Finch and many other great stars of the time. The artwork is by the legendary cartoonist Jessie Marsh and if you want to learn more about him please click here. 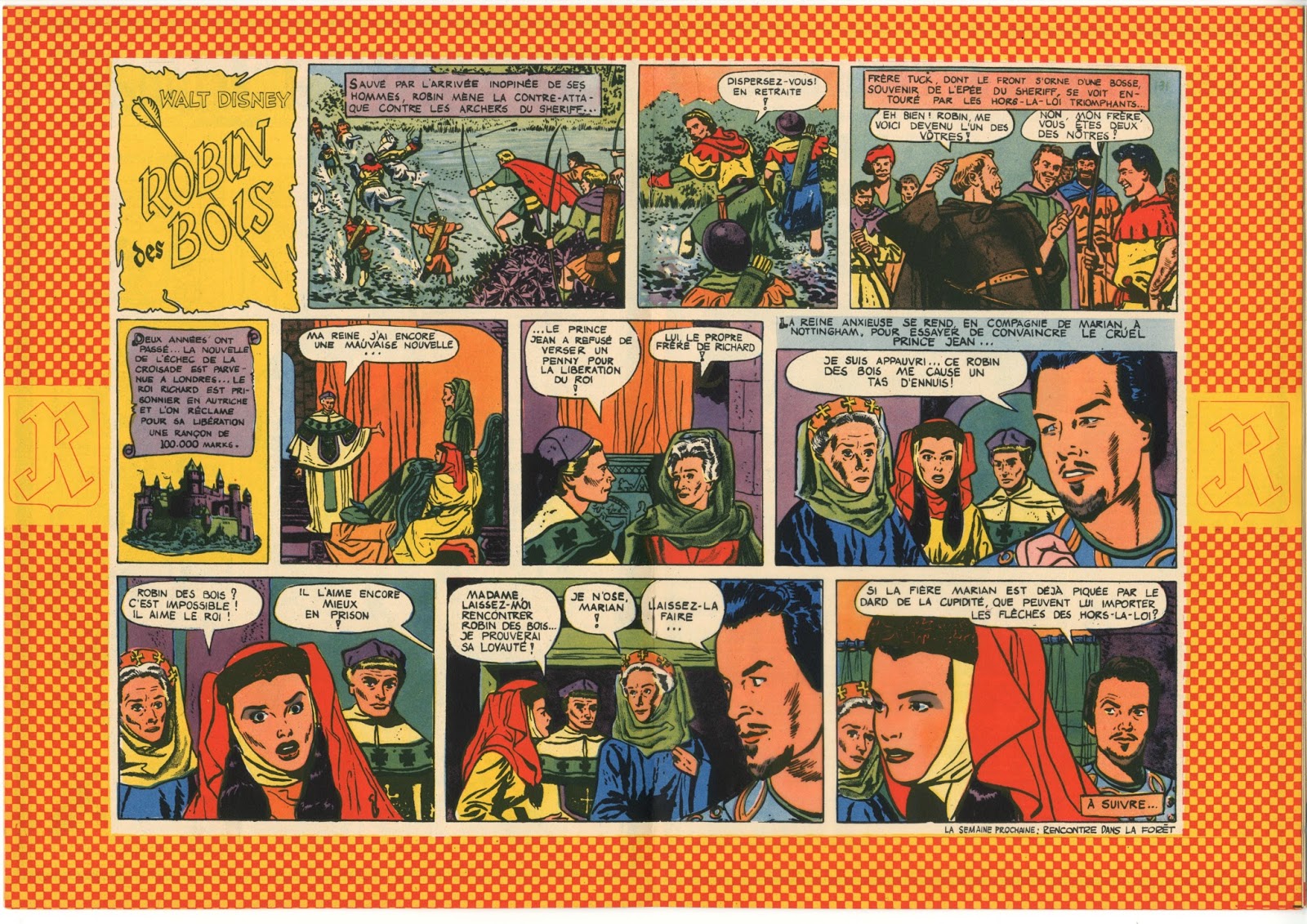 A big thank-you goes out to Matt Crandall on the excellent Walt Disney's Alice in Wonderland site for uploading these rare pages for us to enjoy. 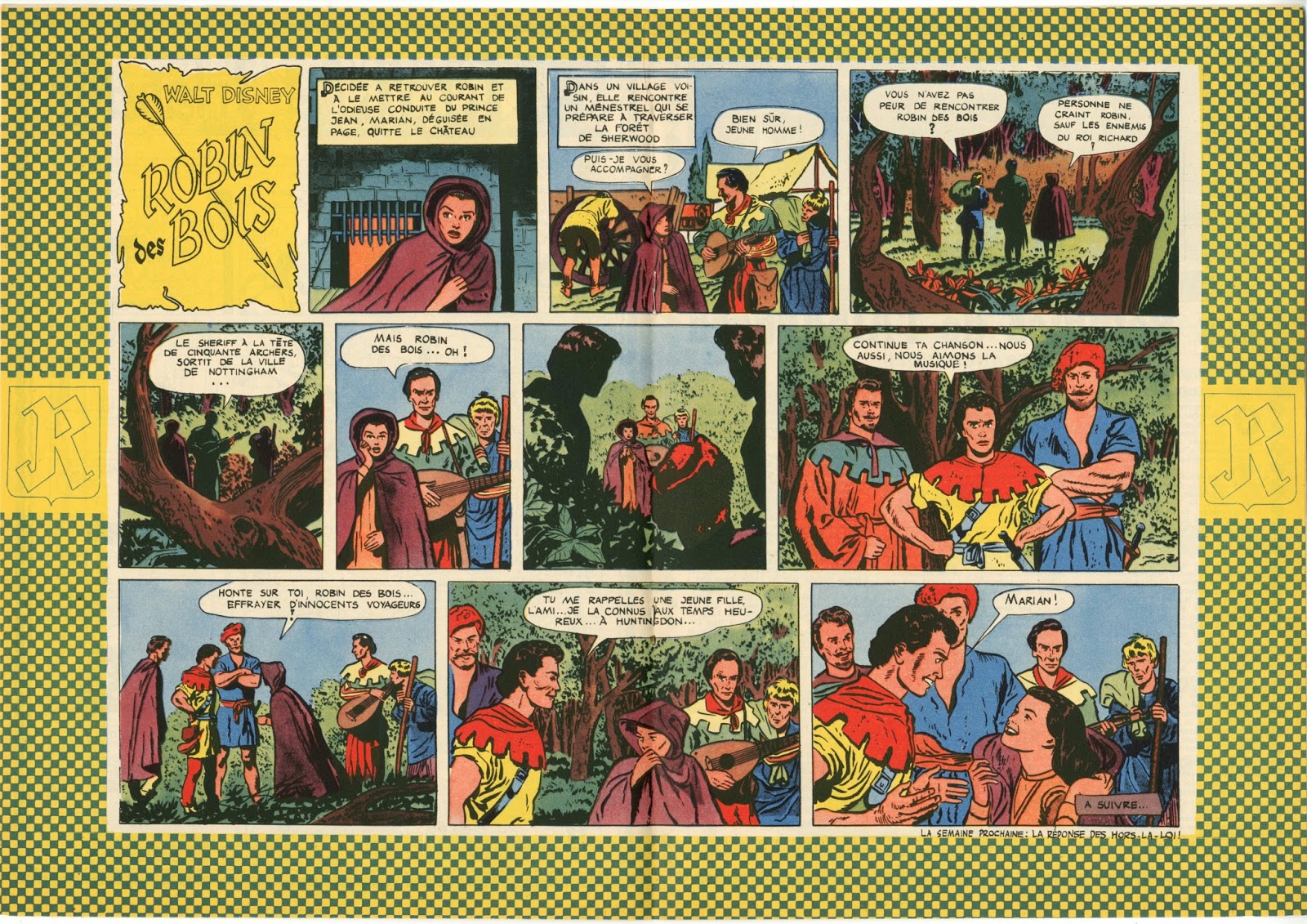 
﻿﻿Joan Rice passed away on January 1st 1997 - she was 66 years old. This blog is dedicated to her memory. So I thought I would begin this new year with an interesting piece about Joan from The Courier-Mail, an Australian newspaper based in Brisbane. It is dated Tuesday 6th February 1951. This was twelve days before it was formerly announced that Joan had been chosen to portray Maid Marian alongside Richard Todd as Robin Hood, in Walt Disney's second live-action feature The Story of Robin Hood and his Merrie Men (1952).


Below is a transcript of the article:

London February 5: Arthur Rank's experts acclaim a 21 year old waitress Joan Rice, as a future Jean Simmons. Joan last week received a two year Rank contract. It was an exciting coming-of-age for Joan was 21 last Saturday.  She heard the news after the West End preview of "Blackmailed," the film that established her.  She found her way to the screen by serving a coffee to a film extra. Joan plays an artists model on the run from a reform school. There is no glamour in the part. Until this opportunity came along she was earning £3.0.9d. and living in one room at Clapham. "Blackmailed" promoted her to £20 a week and a bachelor flat in St. James'.


﻿﻿The back of the press picture (above) of Joan Rice taken by Charles Trigg on the 11th October 1950 reads:


Also included on the back of the picture is a hand written note:


”Joan’s short ‘laffela ‘ evening dress the little cover-up ‘boleru’ was originally a jacket but Joan had it altered into a boleru as she felt that this looked more youthful.”


I think you will agree that this is yet another fascinating insight into the start of 'our' Joan's film career.

There are now over 74 pages on this blog about her life and career, please click here to see them.
4 comments: