Over the past ten years we have made some fascinating discoveries about Walt Disney's live-action movie The Story of Robin Hood and his Merrie Men (1952). But I was beginning to think there was nothing else to surprise me, until Neil sent me these two intriguing images: 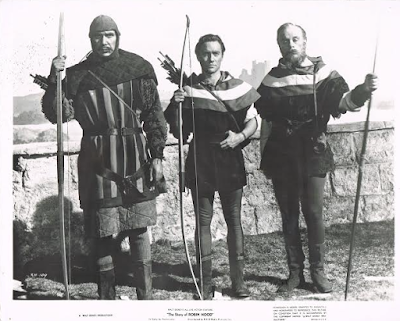 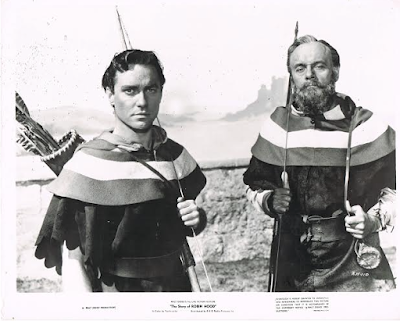 
"I have been looking through my film memorabilia and come across these two stills which I have not taken notice of previously - I don't know why because they are very unusual and very interesting.Richard Todd as Robin Hood is posing with his father in one of them - BUT it is not the actor Reginald Tate, who plays his father in the film - and looks like a stand-in for a pre production design set up.

The clothes are quite different to those in the film - and Richard Todd has slightly shorter hair and in these stills looks nothing like as convincing as he does in the film.

On the other picture there are three of them - Richard Todd as Robin, Someone as his father AND another stand-in for Red Gill I would guess - who was played in the film by Archie Duncan.It could be that these men are stunt doubles as they are similar in stature to the actors.The costumes also look wrong - and my opinion is that they were going through the options until they got it right which they did of course.Another thing - the backdrop - I  at first,  thought this might be a real backdrop but looking further I am leaning towards a studio set picture - and I think that is what it was."


These do seem to be 'test shots', used - as Neil says - by Walt Disney's production crew on Robin Hood, for design and cinematic purposes. But it does seem unusual for the images to be released in the form of 'movie stills.' Below is how Archie Duncan as Red Gill, Richard Todd as Robin Hood and Reginald Tate as Hugh Fitzooth later appeared in the movie.

Seeing these two experimental pictures taken during the early stages of production, reminded me of a post I did back in November 2012 about a picture I discovered of Joan Rice in a costume that was never used in the movie. It  tied-in with a  memo sent by Walt Disney to Perce Pearce and Fred Leahy regarding Joan Rice's Maid Marian costume:

“The final tests arrived the first part of the week and we looked at them. I think [Richard] Todd is wonderful, and I feel he will project a great deal of personality and do a lot for the role.Joan Rice is beautiful and charming. I think, however, she will need some help on her dialogue. I thought at times, she lacked sincerity, although one of her close-ups was very cute. I do not care much about her costume in the first scenes. It seems that women of that period always have scarves up around their chins, but I think it does something to a woman’s face. I’d like to see us avoid it, if possible, or get around it in some way or other-maybe use it in fewer scenes.When we see Miss Rice disguised as a page, this costume seemed bulky and heavy. The blouse or tunic was too long and hung too far down over her hips-it didn't show enough of her and I thought distracted from her femininity. I do believe the costume did much to set off her femininity. I think a slight showing of the hips would help a lot."

Walt Disney continued in his memo:

" ... I liked Elton Hayes as Allan-a-Dale. He has a good voice with quite an appeal. The last word I had from Larry [Watkin] was to the effect that he would be sending in a new and complete script very soon. I have been following his changes and the little thoughts I have are close to “lint-picking”, which I feel he is smoothing out in his final script, so I won’t bother about passing on my thoughts until I get his so-called final script...”

Special thanks to Neil for sending in those extremely rare pictures. They have given us yet another fascinating insight into the pre-production of  Walt Disney's Story of Robin Hood and his Merrie Men.


Peter Ewen Solon (1917-1985) played the part of a 'merrie man' in Walt Disney's live action film The Story of Robin Hood and his Merrie Men (1952). His work for Disney also included The Sword and The Rose (1953) and Rob Roy The Highland Rogue (1954). In the same year as Rob Roy, Solon also appeared alongside Richard Todd in the classic movie, The Dam Busters.

Although Ewen was born in Aukland, New Zealand, he worked extensively in both Britain and Australia. His big break came when he was cast as 'Sergeant Lucas' in TV's Maigret (1959). Solon helped to add believability to the series because he was able to speak fluent French.

Recently I received this intriguing message from Ewen Solon's nephew:


"Interesting but not totally substantiated rumour re-Ewen Solon. Ewen's ancestors hailed from Nottingham...and the story of a family connection to Robin Hood has long been passed down the family line. We do know there was a strong allegiance to the throne back then.....how do I know this? He is my uncle."

Ewen looked at home amongst the forest oaks, so it would be interesting to hear more about this Solon family legend.
2 comments: