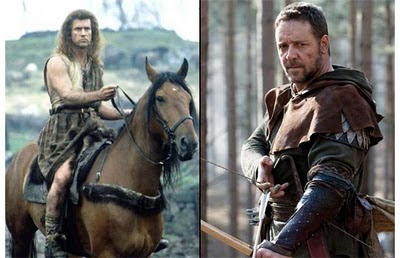 This recent article was in many papers around the world.


"A Canadian novelist is causing a stir in Britain after claiming that the mythic figure of Robin Hood - outlaw champion of medieval England's poor - was actually inspired by the 13th-century Scottish freedom fighter William Wallace, hero of the 1995 Mel Gibson film 'Braveheart'.

B.C.-based, Scots-Canadian writer Jack Whyte, a leading author in the genre of historical fiction, is touting the Robin Hood-Wallace link as part of the rollout of his latest novel, The Forest Laird, based on the life of the Scottish knight who led successful battles against English overlords before his execution in 1305.

Wallace was already a powerful symbol of Scottish nationalism when Braveheart's idealized portrayal of the man heightened popular and scholarly interest in his life, Whyte told Postmedia News on Monday from his home in Kelowna, B.C.

Recent academic research into the real Wallace, he said, was key to his background work for The Forest Laird and led him to a belief that the Scottish hero may well have given life to the Robin Hood myth.

While the novel doesn't explicitly make the connection, Whyte said, "to me it's obvious that there is evidence to indicate (Wallace) was the prototype of what would develop over the next 100 to 200 years" into the Robin Hood legend.

Wallace, Whyte notes, is known to have worked as a forest gamekeeper as a young man, then to have been outlawed for alleged poaching and forced to hide in the woods for a period of time.

He is also known have suffered the death or abduction of his wife Mirren (the Scottish name for Marian) at the hands of a district sheriff.

Whyte also points to the only historical document definitively linked to Wallace as an important clue - a letter sent to the German city of Lubeck in 1297 urging its businesses to continue trading with Scottish merchants despite the battles then raging with English forces.

The letter's wax seal includes the image of a longbow, suggesting Wallace was - like the Robin Hood of legend - a skilled archer.

"The emblem on the seal is a drawn longbow. That's what started me thinking," said Whyte.

Even the scant findings of historians probing Wallace's life "heaved up a huge mountain of possibilities and probabilities" for a rich retelling of the story, he added.

Whyte first drew comparisons between Wallace and Robin Hood in an interview with the Calgary Herald in November.

"You don't have to be a genius to add up two and two and get Robin Hood," Whyte said at the time. "I firmly believe that this man, as a young man, was the archetype from which the legend of Robin Hood grew."

The idea has now reached Scotland itself, where scholars are reacting to the Canadian writer's suggestion that two epic figures from British history - each the subject of ancient tales and Hollywood films alike - are deeply intertwined.

"Robin Hood is a towering figure in English folklore," Scotland on Sunday reported this week in a story about Whyte's new book. "But it seems the origins of the mythical hero may lie in the form of Scottish arch-anglophobe William Wallace, who carved his place in history by fighting English oppression."

University of Nottingham researcher David Crook was quoted questioning the theory, and added his view that the Robin Hood character probably evolved from a medieval-era thief whose story was embellished in subsequent generations.

But Stirling University lecturer Fiona Watson, a Wallace expert, acknowledged the possibility of a link. "There are a lot of parallels between Wallace and the Merry Men."

As for direct historical connections between the life of Wallace and the legend of Robin Hood, she added: "Nobody can definitely say 'it isn't', just as they can't say definitely 'it is', because you're dealing with an old culture you can't trace."

Noted Robin Hood scholar Stephen Knight, a professor of English at Cardiff University in Wales, told Postmedia News on Monday that while "there is no sign that Wallace was the original of Robin Hood," there is evidence that Wallace's life story had "some influence on the development of the Robin Hood myth.."

Whyte said that while he is "not stipulating that William Wallace was Robin Hood," the "basics of his story are such that they could be easily adapted to English folklore."

Whyte, 70, came to Canada from Scotland in 1967, and still speaks with a strong accent from his native country."

May have been some influence but not the real Robin. There are many figures throughout the medieval era that could have been or added to the stories and ballads of Robin Hood. As most of the stories centre on Sherwood and the Barnsdale area a few miles to the north it is unlikely that Wallace was 'Robin'.

A figure that seems to have both Robin Hood associations and with King Arthur, was Hereward the Wake who was existent during the Norman Conquest some 130 years before the era that Robin stories now seem to favour. This is just my theory that he may have had some of his exploits transferred to the Robin Hood legend so please feel free to shoot this down... ;o)

Many thanks for your comments Albie!
The medieval minstrels used popular themes in their stories, rather like the soap opera writers of today. The audiences of the middle ages seemed to thoroughly enjoy stories of concealment and trickery. Fulk Fitzwarin disguises himself as an old monk, a merchant and a charcoal burner. Hereward is disguised as a potter and a fisherman. Eustace the Monk wears the clothes of a potter, shepherd, pilgrim, charcoal burner, woman, leper, carpenter and minstrel. William Wallace became a potter, pilgrim a woman (twice) and a beggar. Robin Hood dressed up as a potter, butcher, beggar, shepherd, old woman, fisherman, Guy of Gisborne etc.

These became the stock-in-trade tales of those early entertainers. The tale of the Saxon outlaw known as Hereward and the Potter is almost identical to the ballad ‘Robin Hood and the Potter.’ The only difference is that William the Conqueror has become the Sheriff of Nottingham. This story-line also appears in the 13th Century ballad of ‘Eustace the Monk’ (c.1170-1217) who also flourished during the reign of King John. Eustace lives in the forest with a band of men and through many disguises the outlaw manages to trick and ridicule the Count of Bologne and lure him into the forest, where he is ambushed but eventually freed. Victims are brought to Eustace’s camp and asked how much they carry. If they tell the truth they are allowed to keep it, if not the outlaws keep the difference. Sound familiar?

Always in these outlaw legends the champion of justice is the master outlaw. In the ‘Tale of Gamelyn,’ probably written about the middle of the fourteenth century we have the familiar outlaw code that they will only harm rich abbots and monks, not the poor.

So it is impossible to work out from this mixed bag what is original; and shows why it is so hard to pin Robin Hood down to a historical setting. But what I can say is that the recent discovery of the surname ‘Robehod’ in a memorandum roll of 1261/2 points to the tantalising fact that the legend of the English outlaw was already popular well before Wallace had started his campaigns against the English!

Maybe this guy just imitated the original Robin Hood....Why not? People have did this all through history.

But in my opinion, I believe their were two Robin Hoods (maybe grandfather and grandson) before the 13th century.

Hi Clement,
I have read of this comparison before in a book i once had about William Wallace (cannot remember the name of the author). His wife was Marion Braidfoote, daughter of a Norman lord, i do believe.

That's an interesting idea, two Robin Hood's, Avalon. Well, there are many of them in the records, we just have to find the guy that sparked the legend, which ain't easy!!

Welcome Paula!
Yes, there are comparisons all the time with medieval outlaws and Robin Hood. Trouble is out of the hundreds that were known to our ancestors only Robin remains popular in modern times. But all had very similar stories told about them and familiar characteristics.

Very little is known about Wallace's early life. It is once again legend and those medieval ballads that supply us with the name Marion Braidefoot as his wife. So as always we have to be careful.

I just want to say Hi to Everyone!

What was the top and most terrible movie of the year 2010 in your oppinion? In my view it might have to be:

Greatest: Harry Potter and the Deathly Hallows Part One

Worst: A Nightmare on Elm Street