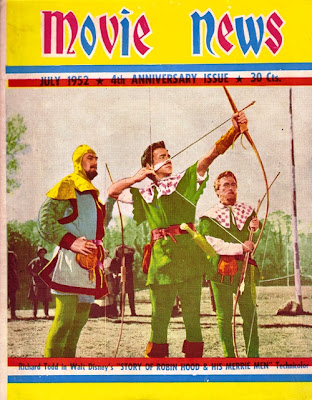 This magazine was recently on Ebay. It is Movie News from July 1952 and is promoting Walt Disney's Story of Robin Hood and his Merrie Men. I would be interested to know if the magazine was actually sold with such garish colour on the cover!

Wolf's Head by Steven A. McKay 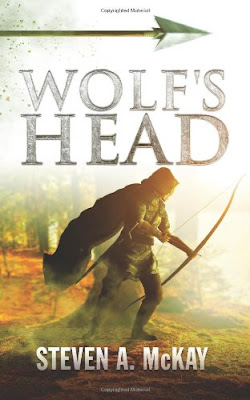 I have been interested in the Robin Hood legend for over forty years. It has become quite an obsession. Down those years I have collected and read quite a vast array of literature on the illusive outlaw. Everything from the early ballads, graphic comics, film promotions, literature for children and attempts to identify him, fill my shelves. So whenever a new book comes out, my ears prick up and I investigate.

As you can probably imagine, it is hard to re-write a legend that has been established for over nine hundred years. Quite recently the writers of the Russell Crowe movie were forced by Universal Pictures to alter their radically original script through fear of not getting enough bottoms on seats in cinemas. It seems the general public do not like the traditional story of Robin Hood tampered with too much, so it quite a challenge for writers to come up with a new approach to an ancient myth.

But in my opinion, “Wolf’s Head”, Steven A. McKay’s debut novel, cleverly blows away quite a few of those old cobwebs.  In this fast moving story we find ourselves, not in Nottingham during the reign of Richard the Lionheart, but in fourteenth century Wakefield, Yorkshire, during the start of the civil war between Thomas Earl of Lancaster and Edward II.

McKay has decided to use in his novel a candidate put forward by the minister and antiquarian Joseph Hunter (1783-1861). Hunter discovered a Robert Hood in the chamber accounts of Edward II and believed he was the same man recorded in the Wakefield Court Rolls and caught up in the Lancastrian rebellion. As a tenant of Thomas Earl of Lancaster Robert/Robin would have had to fight for his lord at the Battle of Boroughbridge (1322) and consequently outlawed. Hunter believed Robert Hood was later pardoned by the king and invited to court, like in the legend. There is more information on this website.

So “Wolf’s Head” begins Robin’s gritty journey from living in the town of Wakefield with his family and girlfriend Matilda, to becoming caught up in the turmoil of the times and outlawed. But life in the forest is not the romantic ideal usually portrayed in the literature and movies. We come across the traditional characters of the legend; but in McKay’s story we witness the harsh reality of broken men outside the law being hunted like wolfs.

Steven McKay’s novel is a fast-moving action packed adventure that I found hard to put down. It deserves its place up there on the top shelf of Robin Hood literature and I am looking forward to the sequel.
3 comments:

Email ThisBlogThis!Share to TwitterShare to FacebookShare to Pinterest
Labels: Reviews 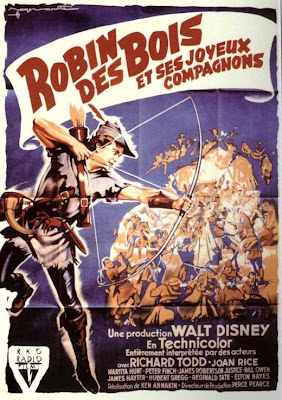 This French poster dates from c.1952 and was used to advertise Walt Disney's live-action movie the Story of Robin Hood and his Merrie Men which was released on the 13th August of that year.

To see a collection of over 21 posters and advertisements used to advertise this wonderful film, please click here.
2 comments:

This blog now contains over 640 posts, so sometimes it is hard to catch-up with comments left by readers on earlier pages. Just recently I was thrilled to discover a comment by Kath Owen on a post I did in 2011 about Disney's film director Perce Pearce (1899-1955). I wish I had seen it sooner:

"I've been looking on the Internet for any mention of my Dad's family who all seem to have worked on (or watched as a child) the filming of Robin Hood, Treasure Island and many other films made at Denham. I'll have to double check with Dad but I'm sure that my Grandmother worked as some kind of housekeeper to Perce Pearce while he was there (they lived nearby). Dad always said she met Walt Disney and now it seems she did!! Wow this is amazing! My maiden name is Owen. I'm looking for the Denham archives to see if I can find any mention of my uncles Will, Eddie and Ralph. My Dad (Allan) was too young but watched the filming and my Grandfather I think is listed as Ned he worked on the props. Dad has so many stories about that time. Everyone loved Perce Pearce."

I hope my readers and I haven't lost an opportunity to learn more about the making of those magical Disney movies here in England. So please get in contact again Kath at: disneysrobin@googlemail.com.

We would all love to know more about your research into the work your family did at Denham Studios for Walt Disney and any other anecdotes you might have!