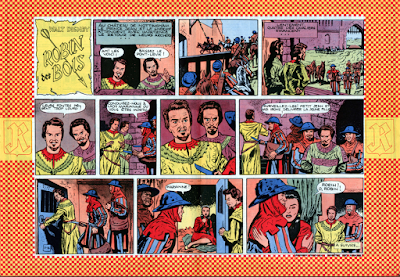 Thanks to Matt Crandall I can now upload two of the latest instalments of the Robin Hood strips from the Belgian 'Mickey' magazine from 1953.

Matt runs the excellent Walt Disney's Alice in Wonderland blog, which contains many rare items and collectables from the classic animated film. He has also been very kindly sending me the comic strips that were drawn by Jessie Marsh and based on the Disney live-action film The Story of Robin Hood and his Merrie Men which was released in 1952. 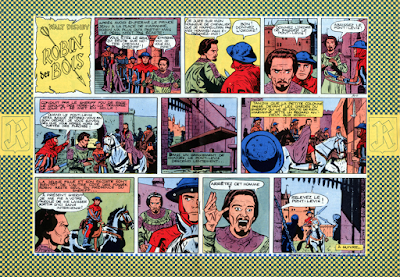 To catch-up with previous pages from the magazine please click here.

And don't forget you can view the whole of the movie with Laurence's fantastic picture strip here.


As regular readers of this blog will know, Robin Hood not only has links with Nottinghamshire but also Yorkshire - both counties continuing to claim him as their own.

In April 2005, when the Peel Group opened their £80 million airport on the former site of RAF Finningley in the borough of Doncaster, South Yorkshire, they provocatively re-named it 'Robin Hood Airport.'

This former long range nuclear bomber base is situated less than 18 miles from the legendary haunts described in one of the oldest tales about the outlaw, A Gest of Robyn Hode printed between 1492-1534.
The 'Barnsdale' referred to in the early ballad - the base for the outlaw's activities - is often identified with a relatively small area in South Yorkshire near The Great North Road, just north of Doncaster. Wentbridge and Saylis also appear in the stories of Robin Hood and the Potter and the Gest respectively. Legend states that his remains are buried at Kirklees Priory near Brighouse, West Yorkshire.

So two years after the airport's official opening a10-foot bronze statue of Robin Hood, sculpted by Neale Andrew was unveiled by actors Sean Bean and Brian Blessed on the first floor of the airport. Both actors are Yorkshire born and bred and proud of their roots.

During a press interview after the ceremony Sean Bean confessed that he would, "love to play Robin Hood on the big screen," he said. "It's 16 years [2007] since Kevin Costner did it - now it's my turn."


Brian Blessed, who played Robin Hood's father in the Costner movie Robin Hood: Prince of Thieves, joked that the reason they were both invited was because, " Sean is very talented, but I have the sex appeal."


"I was born just eight miles away in Mexborough and I lived in Goldthorpe, my dad died about a year ago - he was the oldest surviving coal miner, he was 99 - and he was thrilled to bits with this airport. It's marvellous the way it's revitalised the area. I'm very proud to be part of this."

After the airport was re-named in 2005, Nottingham  council accused Doncaster of 'jumping on the band-wagon'!

To read about Robin Hood's death at Kirklees please click here. Information about the medieval ballads Robin Hood and the Potter and the Gest of Robyn Hode can be seen here and there are many more links and in the sidebars.