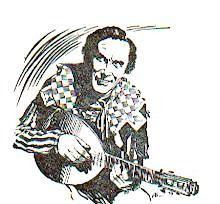 This BLOG is now two years old. How time flies when you’re having fun! And fun it certainly has been. I had never attempted producing a blog or website before, so this whole thing has been a completely new experience for me. And what an experience!
There have been many highlights. Without doubt the most exciting for me, was Neil’s amazing discovery of The Riddle of Robin Hood, the promotional film that showed the research and production of Walt Disney’s Story of Robin Hood (1952). Something I had been looking for, over the last few years. It is not only an important piece of Disney history, but a fascinating insight into British Post War movie production. Neil very kindly sent me a DVD copy, which I treasure. I will continue to post excerpts from The Riddle of Robin Hood in the future.
Neil’s comments, contributions and obvious enthusiasm for Walt Disney’s Story of Robin Hood have made producing this web site so worthwhile. The still he sent me of Richard Todd being filmed for Robin Hood on the riverbank and the magazine article of Joan Rice’s screen test as Maid Marian at Denham Studios are priceless! I am trying to talk him into contributing more articles!
I would like to think that this blog has gone someway into discovering more about Joan Rice and giving her the recognition she deserves. Before, all that could be found out about her was the vague description in a few movie books, that she was a ‘pert English actress of the 1950’s’. After the initial help from Maria Steyn, Joan’s niece, some friends and neighbors we have gradually pieced together a little more about the life of our beautiful Maid Marian. Recently I have had some more feed-back which I will post soon.
Another highlight for me was to find, at long last, some rare information on Walt Disney’s legendary producer Perce Pearce. This had taken months to obtain, after many visits to libraries and long nights trawling the internet. But eventually some people answered my pleas for help and a couple of readers of the Disney History site came up with some newspaper clips and details of his life.
But this blog is not just about Walt Disney’s wonderful Robin Hood movie and its actors and actresses, but a legend that has lasted for nearly eight hundred years. We have already had a look at the earliest ballads and the first printed versions of his adventures. These have been popular with visitors to my site and my poll showed that 28% of my readers enjoyed discovering more about the medieval Robin Hood. I will continue the historical search for the elusive outlaw, his many images and the places associated with his legend.
Visitors to my blog have steadily increased over the past couple of years, to nearly two thousand a month. But most of you tend to call-by without saying hello. Please don’t be shy. There are a number of places where you can leave a message, please do, even if it is just to say hello!
I am taking a short break, but I will be back soon, hopefully thoroughly refreshed, when we will continue our journey with Allan-A-Dale through the leafy glades of Sherwood Forest. Thank you once again for all your support and enthusiasm. It makes it all worthwhile.
1 comment: 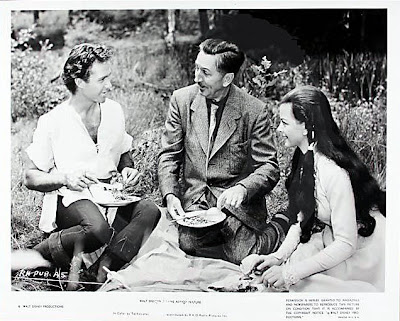 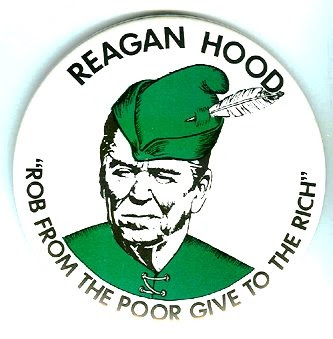 Another example of how the medieval legend of Robin Hood remains continually open to fresh interpretation.

Email ThisBlogThis!Share to TwitterShare to FacebookShare to Pinterest
Labels: Images of a Legend 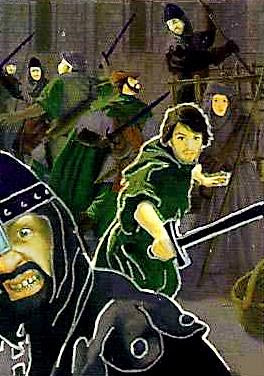 In countless stories and films about Robin Hood the people were always unwilling to give poachers away to the foresters. Historical evidence also shows that during the medieval period this was true and that they also refused to answer questions. A good example of this is recorded from an inquest held in 1248 about a poaching incident in Weybridge Forest in Huntingdonshire.

On 2 August the walking foresters were going about midnight to watch over their bailiwick and met a red greyhound worrying a doe, they called the greyhound and took it. Afterwards twelve men came...one of them with an axe in his hand, another with a long stick, and the other ten with bows and arrows. And they led three greyhounds in a leash, of which one was white, another speckled with black and white, and of what colour the third was they know not.

One of the men was recognised by the foresters as Gervase of Dene in Bedfordshire who was captured a fortnight later and put in Huntingdon gaol.

After the ninth hour there came to the foresters, Walter the chaplain of Huntingdon and other chaplains of the same place and William of Leicester, the bishop of Lincoln's bailiff, with book and with candle intending to excomunicate all who had laid hands on Gervase, and they sought him as a clerk and a servant of the bishop and commanded the forester to free him from prison.

When the foresters said that it was beyond their power to let him go they went to the prison and took the said Gervase as a clerk. And they took off his cap and he had his head newly shaved, and the foresters suspected that it had been shaved that day in prison

The foresters doubted whether Gervase was a clerk at all and when the Justice of the Forest visited in 1255, Walter the chaplain was summoned to appear. He was later convicted of the rescue and handed over to the archdeacon of Huntingdon. Gervase was also convicted.

Email ThisBlogThis!Share to TwitterShare to FacebookShare to Pinterest
Labels: Outlaws 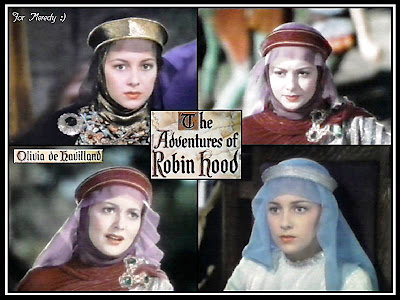 For the role of Maid Marian, the production team of The Adventures of Robin Hood (1938) selected Olivia de Havilland, who had been paired so successfully with Errol Flynn in Captain Blood and The Charge of the Light Brigade (1936). But Jack Warner opted for contract player Anita Louise, who was confirmed by producer Hal B. Wallis during the early stages of planning. But later Wallis announced that Olivia de Havilland had been given the part and the rest is classic cinematic history! 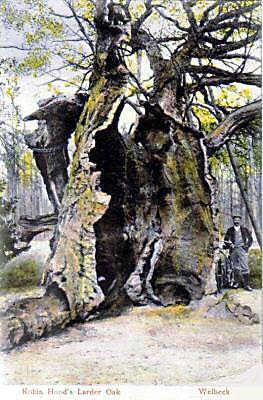 Here is a very rare postcard of Robin Hood's Larder in Sherwood Forest, dated between 1902-1904. Robin Hood's Larder was a large hollow oak tree where the Sherwood outlaws supposedly hung their venison after having stolen it from the King. The tree was also sometimes known as the Shambles Oak, but sadly it no longer exists.

To find out more information on Sherwood Forest and the history of Robin Hood's Larder, please click on the label below.

23: Demands from the Outlaws 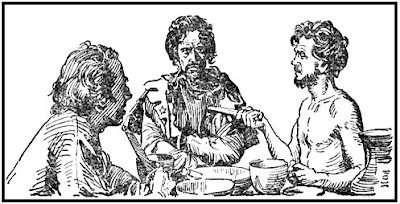 “Ten shillings for my dog maimed…..”
“Five for the loss of my sow…..”
“Four marks for my stolen horse….”
“My son thrown down a well…”
The priest began to tally the individual cases.
“Roughly,” the friar eventually said, “one hundred….”
He raised his hand to scratch his head and he touched the massive bump caused by the Sheriff’s sword.
“TWO hundred shillings.”
“You thieving mock-priest!” Yelled De Lacy, “Why don’t you join them too?”
The friar looked surprised.
“God forgive me,” he said, “It seems I have already done so.”
The outlaws roared with laughter.
“Come,” said Little John to the Sheriff, “Let’s see the colour of your money.”
Stutely quickly severed De Lacey’s purse from his belt and poured out a stream of golden coins onto the table.
“You’ll pay for this,” raged the Sheriff, “my men will take you yet and hang you too– as an example to other rebels.”
“But first,” said Robin, “we’ll make an example of you.”
At Robin’s signal the Sheriff was surrounded. Then Stutely ran in with a pair of antlers, which the men bound firmly around De Lacey’s head. With yells of laughter he was tied to his horse with his face turned towards the creature’s tail. As a final touch, Stutely put the horse’s tail in the Sheriff’s bound hands.
With a smack on the rump the horse leaped forward carrying a furious Sheriff back to Nottingham amidst yells of laughter.

(To read the earlier chapters of the story from the film, please click on the Label 'Story.') 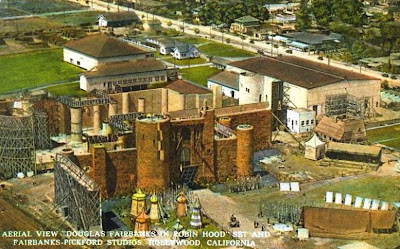 This is the 90ft. Nottingham Castle, constructed on the Goldwyn Lot out of 'chicken wire, plaster and old rocks' by 500 construction workers for Douglas Fairbanks's 1922 movie Robin Hood.