I was pleased to recieve a comment recently by Laurence, regarding my article about the ‘medieval' chant used during one of the scenes of Walt Disney’s Story of Robin Hood and his Merrie Men (1952).

You can view my post here:- The Chant of the Crusaders.

In my opinion, the 1950’s were a golden era for films such as these. Ivanhoe is another of my favourite movies, released the same year as Walt Disney’s live action film The Story of Robin Hood.  Our regular contributor Neil Vessey, has a fantastic web site dedicated to Films of the Fifties. Take a look!

MGM’s Ivanhoe (1952) starred Robert Taylor as the Saxon knight, loyal to King Richard the Lionheart who has been captured and ransomed. Also appearing in this epic adventure are Elizabeth Taylor, Joan Fontaine and George Sanders. The film is based on the novel by Sir Walter Scott, first published in 1819.

Richard the Lionheart’s Ballad
As Laurence says, it was Miklos Rózsa (1907-1995) who scored the music for MGM's Ivanhoe and in 1953 he was nominated for both Academy and Golden Globe awards for his work. Rózsa is known for composing the music for nearly a hundred films.

In 1987 Rózsa described to Bruce Duffie the medieval sources that inspired him to write the soundtrack for Ivanhoe:


“The various themes in Ivanhoe are partly based on authentic Twelfth Century music, or at least influenced by them. Under the opening narration I introduced a theme from a ballad actually written by Richard the Lionhearted. The principle Norman theme I developed from a Latin hymn by the troubadour Giraut de Bornelh. This appears the first time with the approaching Normans in Sherwood Forest. Later during the film, it undergoes various contrapuntal treatments. The love theme for Ivanhoe and Rowena is a free adaptation of an old popular song from the north of France. The manuscript of this I found in a collection of songs in the Royal Library of Brussels. It’s a lovely melody, breathing the innocently amorous atmosphere of the middle ages, and I gave it modal harmonizations. Rebecca needed a Jewish theme, reflecting not only the tragedy of this beautiful character but also the persecution of her race. Fragments of medieval Jewish motives suggested a melody to me. My most difficult job was the scoring of the extensive battle in the castle because the producers wanted music to accompany almost all of it. I devised a new theme for the Saxons, along with a motive for the battering ram sequence, thereby giving a rhythmic beat which contrapuntally and polytonally worked out with the previous thematic material, forming a tonal background to this exciting battle scene. Scoring battles in films is very difficult, and sadly one for which the composer seldom gets much credit. The visuals and the emotional excitement are so arresting that the viewer tends not to be aware that he or she is also being influenced by what is heard.”         (Movie Music UK)


As my regular readers know, I have posted many times on various aspects on the life of Richard the Lionheart. He is a king who has always interested me. So I was keen to investigate this ballad that has been attributed to him and used in Ivanhoe.

The Lionheart is Captured
On his way back from the third Crusade in 1192, King Richard I (1157-1199) was captured by Leopold V, Duke of Austria and sent to a strong castle built high on a mountain-slope over-looking the Danube: the castle of Durnstein. Legend states that Blondel, King Richard's faithful minstrel, travelled the length and breadth of Germany in search of his missing lord. He visited castle after castle and outside each one sang the first lines of a song which he and Richard had composed together.

One day while resting in a garden at the foot of a tower in which Richard was held, the king saw him and sang, ‘ for he sang very well- the first part of a song which they had composed and which was known only to the two of them’ . This was the inspiration for the opening scene of the film, Ivanhoe (1952).

Blondel’s Song
In its earliest known form, this story was told in a Rheims prose chronicle written in about 1260. But it wasn’t until the eighteenth century that the legend took off. There was a troubadour known as Blondel de Nesle who lived at the same time as King Richard I. He was a native of Picardy whose work showed the influence of Gregorian chant. Twenty three of his songs have survived. But sadly, there is not a shred of evidence to link him to the legend or that he ever met the Lionheart.

So what was this ballad ‘actually written’  by King Richard the Lionheart, that Rózsa used?

King Richard's Ballads?
Two songs do exist that are attributed to King Richard I in early troubadour manuscripts, the ‘ rotrouenge’  said to have been composed in captivity and a ‘sirventes’  aimed at Dauphin of Auvergne. It is impossible to to be absolutely certain that Richard did write them, but the evidence that he was unusually interested in music is overwhelming. Richard was well educated, his upbringing would have included music. His mother was Eleanor of Aquitaine and a generous patron of poets and musicians. Richard grew up almost exclusively in Eleanor’s court. He was surrounded by the poetry and troubadour culture throughout his childhood.

The incredibly beautiful song, written in captivity, Ja nus hons pris, translates as "no man who is imprisoned' and is said to have been addressed to Richard's half-sister, Marie de Champagne, expressing the feeling that he had been abandoned by her and his barons to an unfair fate.

Is this what Rózsa based his opening theme on for Ivanhoe?

INo prisoner can tell his honest thoughtUnless he speaks as one who suffers wrong;But for his comfort as he may make a song.My friends are many, but their gifts are naught.Shame will be theirs, if, for my ransom, here —I lie another year.
II They know this well, my barons and my men,Normandy, England, Gascony, Poitou,That I had never follower so lowWhom I would leave in prison to my gain.I say it not for a reproach to them, —But prisoner I am!
III The ancient proverb now I know for sure;Death and a prison know nor kind nor tie,Since for mere lack of gold they let me lie.Much for myself I grieve; for them still more.After my death they will have grievous wrong —If I am a prisoner long.
IV What marvel that my heart is sad and soreWhen my own lord torments my helpless lands!Well do I know that, if he held his hands,Remembering the common oath we swore,I should not here imprisoned with my song, —Remain a prisoner long.
V They know this well who now are rich and strongYoung gentlemen of Anjou and Touraine,That far from them, on hostile bonds I strain.They loved me much, but have not loved me long.Their plans will see no more fair lists arrayed —While I lie here betrayed.

Companions whom I love, and still do love, Geoffroi du Perche and Ansel de Caieux, Tell them, my song, that they are friends untrue. Never to them did I false-hearted prove; But they do villainy if they war on me, —While I lie here, unfree.

Tell them, my song, that they are friends untrue.Never to them did I false-hearted prove;But they do villainy if they war on me, —While I lie here, unfree.
VII Countess sister! Your sovereign fameMay he preserve whose help I claim, —Victim for whom am I!
VIII I say not this of Chartres’ dame, —Mother of Louis!

My Heart Was A Lion
As Ivanhoe (Robert Taylor) rides past several castles, in search of his king, he sings:

My heart was a lion, but now it is chained,Far do I travel, and will travel and singI travel, I travel in search of my heartI vowed me a vow and I pledged this to be, Far will I travel until thou art free.

I think John Haines, in his book, ‘Music in Films on the Middle Ages’, sums it all up very well:

“As it turns out, ‘My Heart Was A Lion,’ is not based on any surviving medieval melody. It does not even occur in Sir Walter Scott’s ‘Ivanhoe.’ It does, however, resemble a modern folk song. Both music and text are apparently new to the 1952 film. It is possible that someone other than Rózsa wrote the music for this song. In the composers sketches for the film, dated November 1951 to January 1952, the music for ‘My Heart Is A Lion’ is nowhere to be found. If Rózsa did not write the song, then quite possibly his orchestrator, fellow Hungarian Eugene Zador - whose daughter once accused Rózsa of not giving enough credit to, ‘young former friend and colleague, the glorified copyist’ - made it up.

Whoever composed it, the song exhibits a few vaguely medieval touches, namely its use of a minor scale and its stepwise approach to cadences. But, in the main, it is a patently modern creation. . .The minstrel song in Ivanhoe bears only the slightest resemblance to the medieval ‘Ja Nus Hon Pris’. The word ‘chained’ vaguely matches Richard’s description of himself as a prisoner (hons pris), but that is all. And its melody has little to do with the music that survives in medieval manuscripts for ‘Ja Nus Hons Pris.’  In short, rather than medieval influences, Ivanhoes’s horseback song bears the marks of modern musical traditions, including that of a singing cowboy”.

John Haines: Music in Films on the Middle Ages Routledge (2013)


Many thanks to Laurence for getting in touch.
6 comments:


I have discovered this small article in The Evening News, dated Saturday April 5th 1952:

As the honest lad who turns outlaw when his father is murdered by the Sheriff’s men, Richard Todd pulls a powerful longbow and turns in a different performance from all his previous ones.

Joan Rice, ex-waitress turned top-line star, is a pretty Maid Marion and earns the approval of the gallant Robin.

The supporting cast is exceptionally strong and includes James Robertson Justice as an enormous Little John, James Hayter as the plump Friar Tuck and Hubert Gregg as Prince John. And there is a pleasing portrayal of a strolling “news vendor” by Elton Hayes. This ranks as the best of the Merrie Men stories”.


This was just one example of the huge publicity machine behind the promotion of Walt Disney’s live-action movie The Story of Robin Hood and his Merrie Men (1952). Disney was a master at promoting his films.

Some of the stores shown in the picture included:

1. The ‘Robin Hood’ display put on by the Houndstitch Warehouse Company in their women’s outdoor wear window.

6. This ingenious ‘Robin Hood tie-in’ is on show at Anglo-French Shoes, of Victoria Street.'

The ‘Picture Post’ article also showed the huge crowds outside the cinemas. The film was of course a huge success! 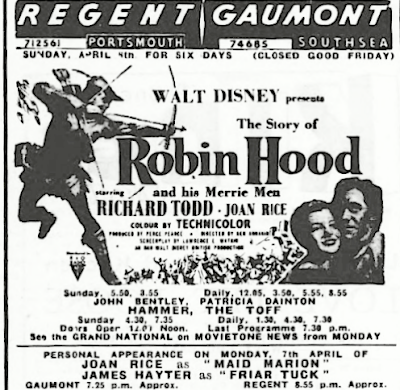