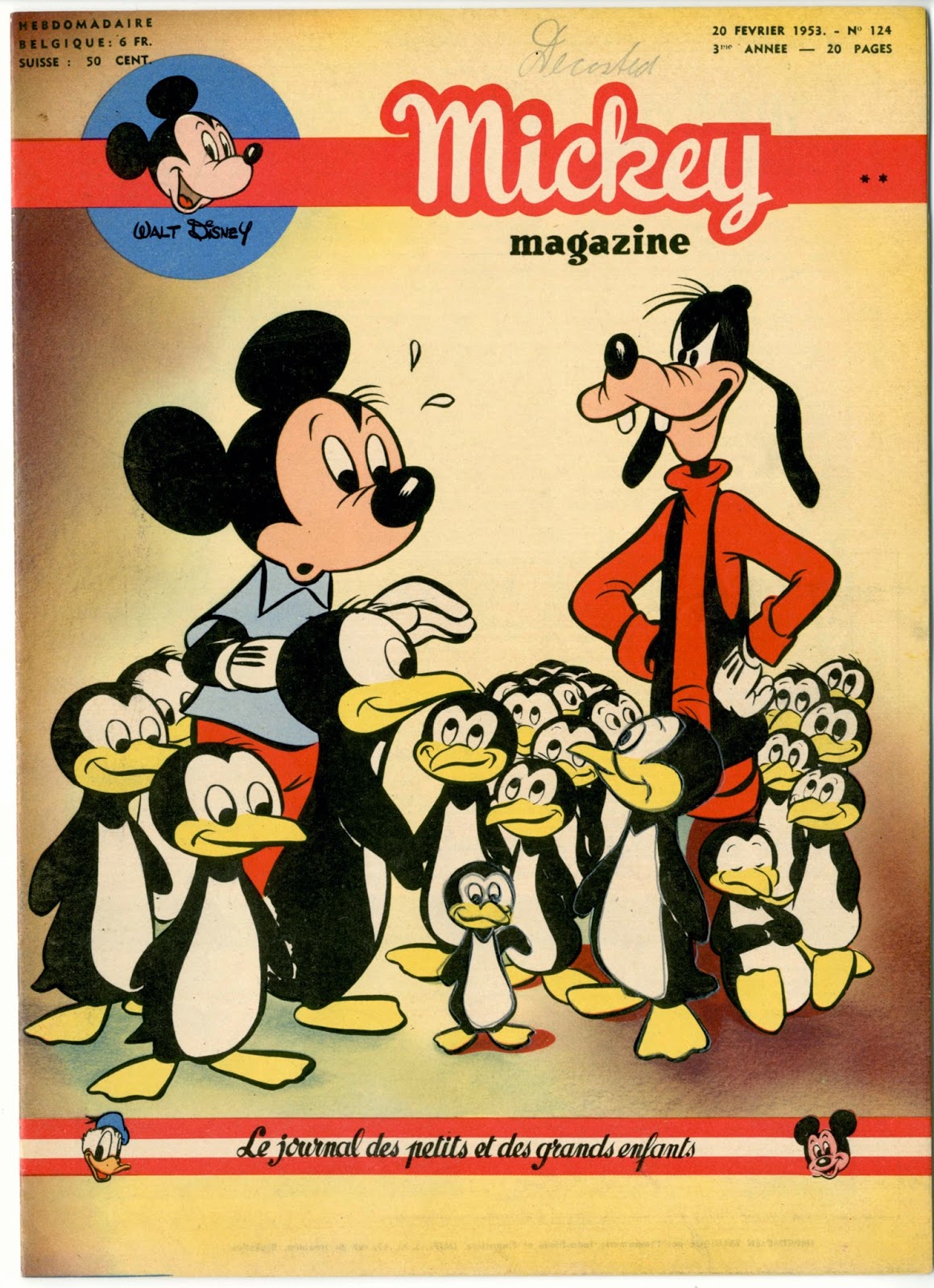 We have now reached the third installment of the wonderful comic strip version of Walt Disney's Story of Robin Hood which appeared in the Belgian Mickey magazine in the 1950's. The strip was based on the live-action film that was released in 1952 and starred Richard Todd, Joan Rice, Peter Finch, James Robertson Justice and a whole host of fabulous actors and actresses. 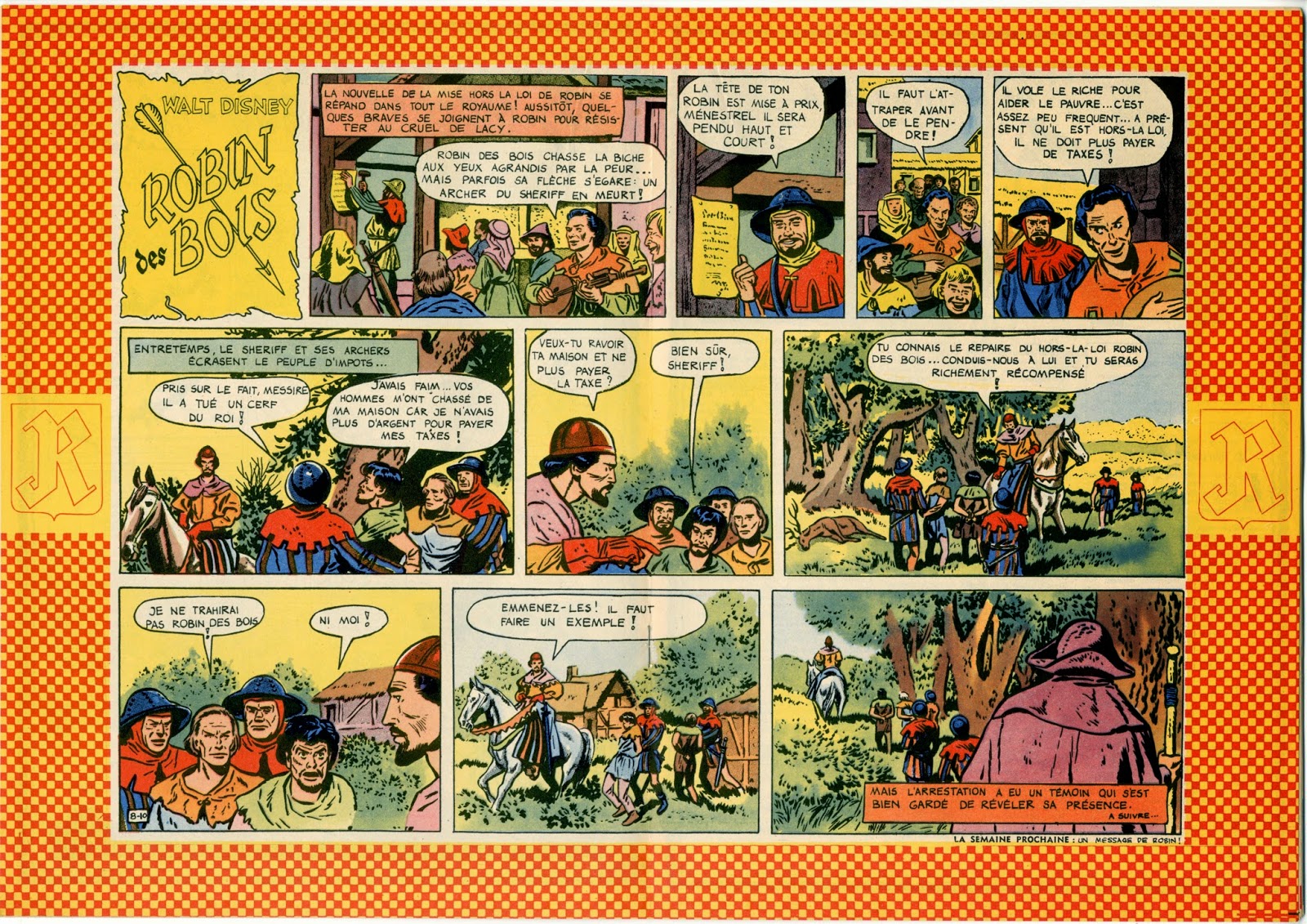 Down the years my blog has tried to keep interest in this live action movie alive. So special thanks go out to Matt Crandall for sending in these comic strips that appeared shortly after the film was released. His excellent web site dedicated to Walt Disney's classic animated movie Alice in Wonderland is here. 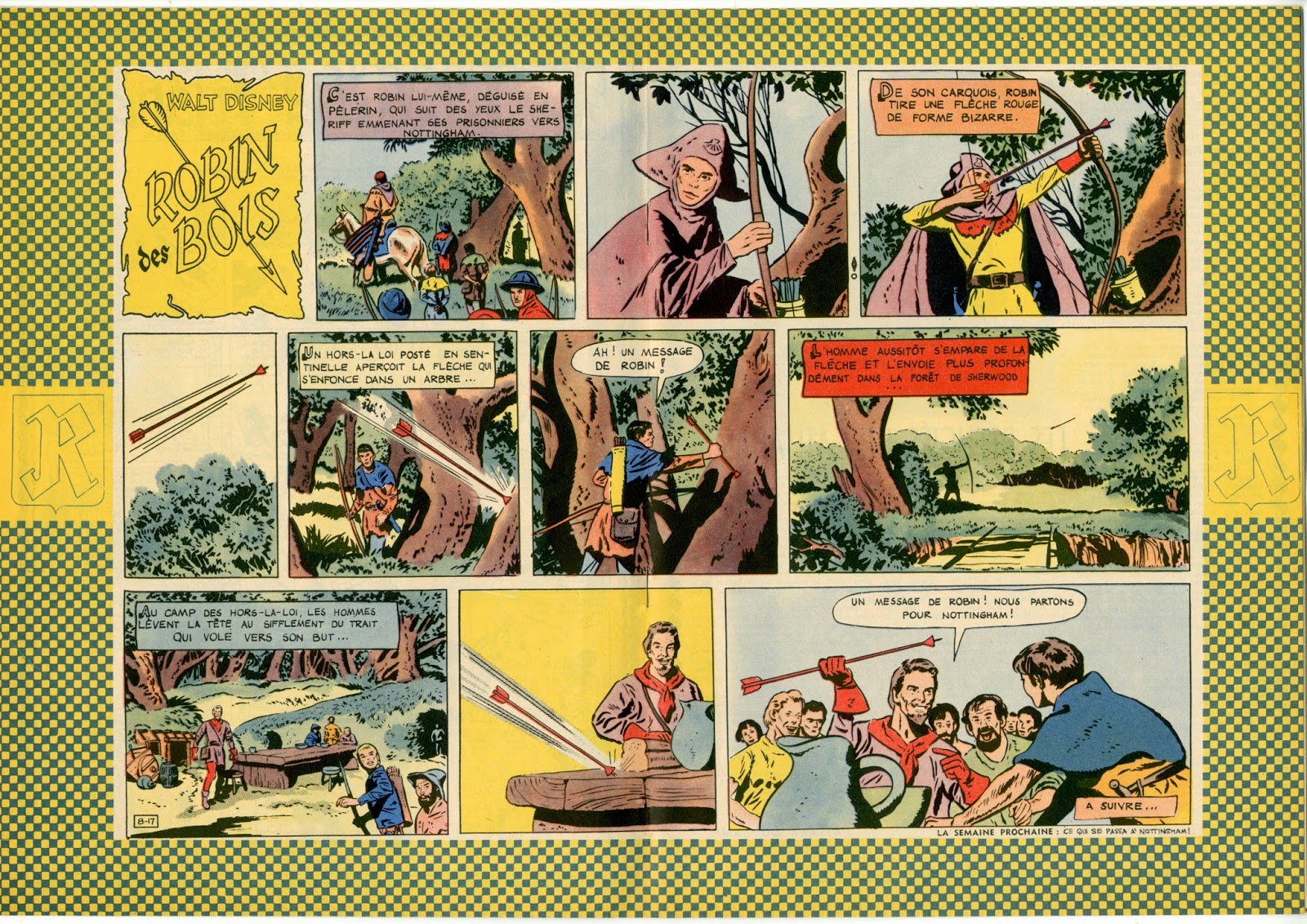 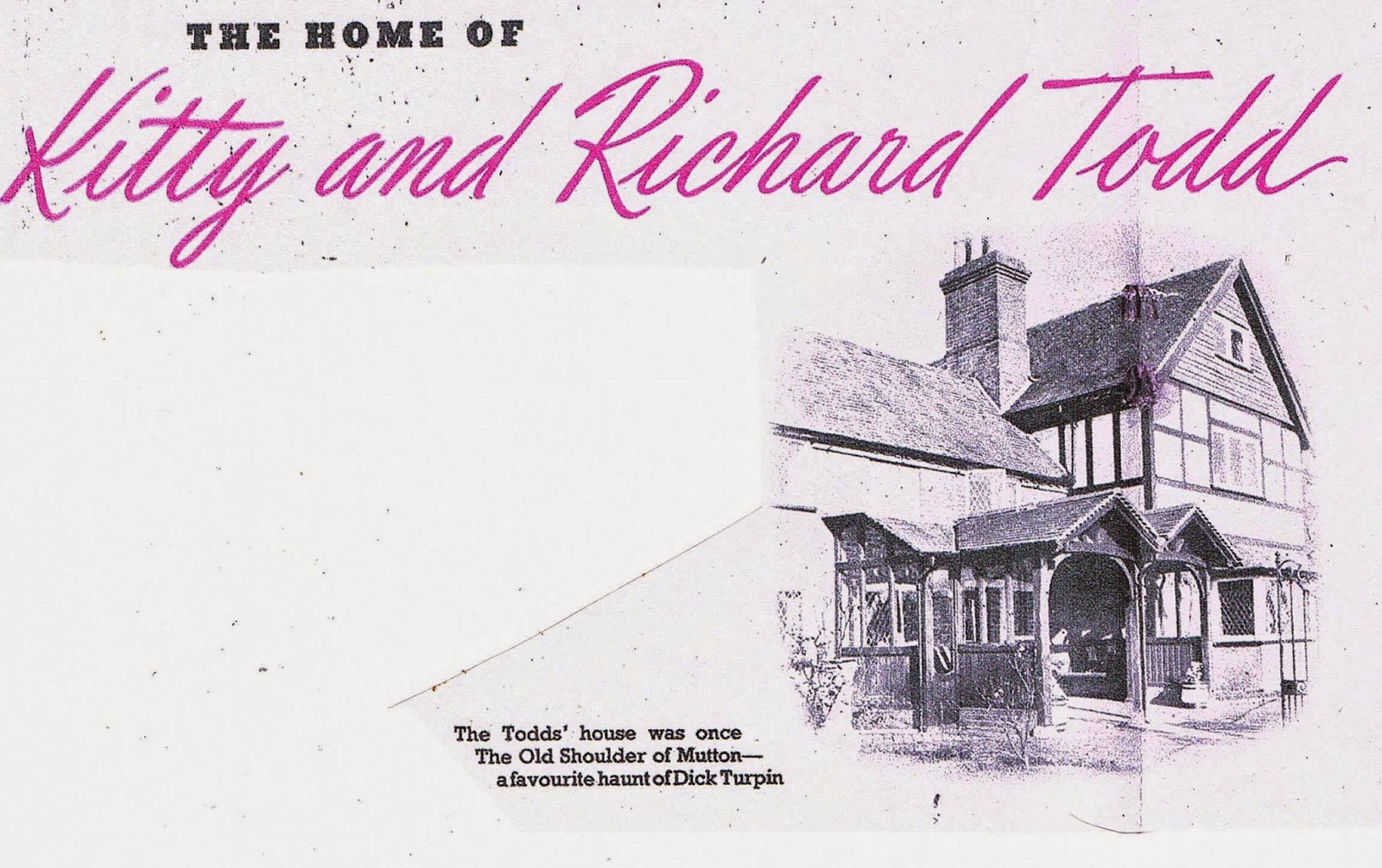 Neil has recently discovered this interesting article in the Woman magazine from 24th May 1952. This was about two months after the premiere of Walt Disney's Story of Robin Hood and his Merrie Men in which Richard Todd (1919-2001) had appeared as the outlawed hero.

The magazine contains details of Richard Todd former home at Wayside House, Pinkneys Green in Maidenhead, where he had lived with his first wife Kitty (Catherine Grant Bogle) (1926-1997). The couple had met at the Dundee Rep shortly after WWII and were appearing together in the American comedy Claudia. 'Kitty' was the daughter of William Grant Bogle a steel brass founder.

Richard and Kitty were married on 13th September 1949 at St. Columba's church, Pont Street, Chelsea. They had two children Peter and Fiona.

From the article it appears that Wayside House was in a bad state of repair when the film star and his Scottish wife first purchased it. The magazine reporter Edith Blair, goes into great detail about how Richard and Kitty spent many weeks rubbing turpentine and linseed oil into the wooden beams and eventually furnishing their new home.

In Richard Todd's first volume of autobiography Caught In The Act : The Story Of My Life - page 272 has:


On the following Saturday, 12 August, we celebrated our wedding anniversary. It was our lucky weekend. On the Sunday we had decided to drive down to Hurley for supper at the Old Bell, and had stopped at Pinkneys Green to let the dogs have a run in the woodland there while we gazed covetously at our dream-house, Wayside.

While we looked, a bent old figure, almost a caricature of Old Father Time, even to the scythe he carried, came shuffling by on the open grass space opposite house. He was clad in black trousers, long black coat, and high-crowned bowler hat that I had not seen since the days of Mr Prout, our gardener at Holsworthy in my childhood.

As he drew level with us he touched his hat and gave us a gummy smile. 'Nice house, that,' he said.

'Lovely,' I said. 'Do you know anything about it?'

'Oh, ar,' he replied. 'When I were a boy it were the Shoulder of Mutton Inn. Very old. Dick Turpin, the highwayman, used to stay there.'

'Ar. This grass ride were the old main road from London to Bath. Very dangerous for robbers. Jack Scott, the highwayman, were taken in the Shoulder of Mutton and hanged at Tyburn. That big bit at the side were the barn. Dick Turpin's Black Bess would have been stabled there.'

If we had thought it charming before, now it positively entranced us.


Richard and Kitty became the owners of Wayside (their first house) at the end of September 1950. The following Spring, Richard appeared in a movie about another famous English outlaw - Robin Hood.

In the picture (above) Catherine is holding what appears to be a book with the title The Dam Busters. This could be the book written by Paul Bricknel and published in 1951. Together with Guy Gibson's Enemy Coast Ahead (1946) these two books would form the basis of Michael Anderson's classic war film The Dam Busters (1955) in which Richard Todd would appear as Wing Commander Guy Gibson.


Special thanks to Neil for supplying the information from the Woman magazine.

To read more the life and career of Richard Todd please click here. 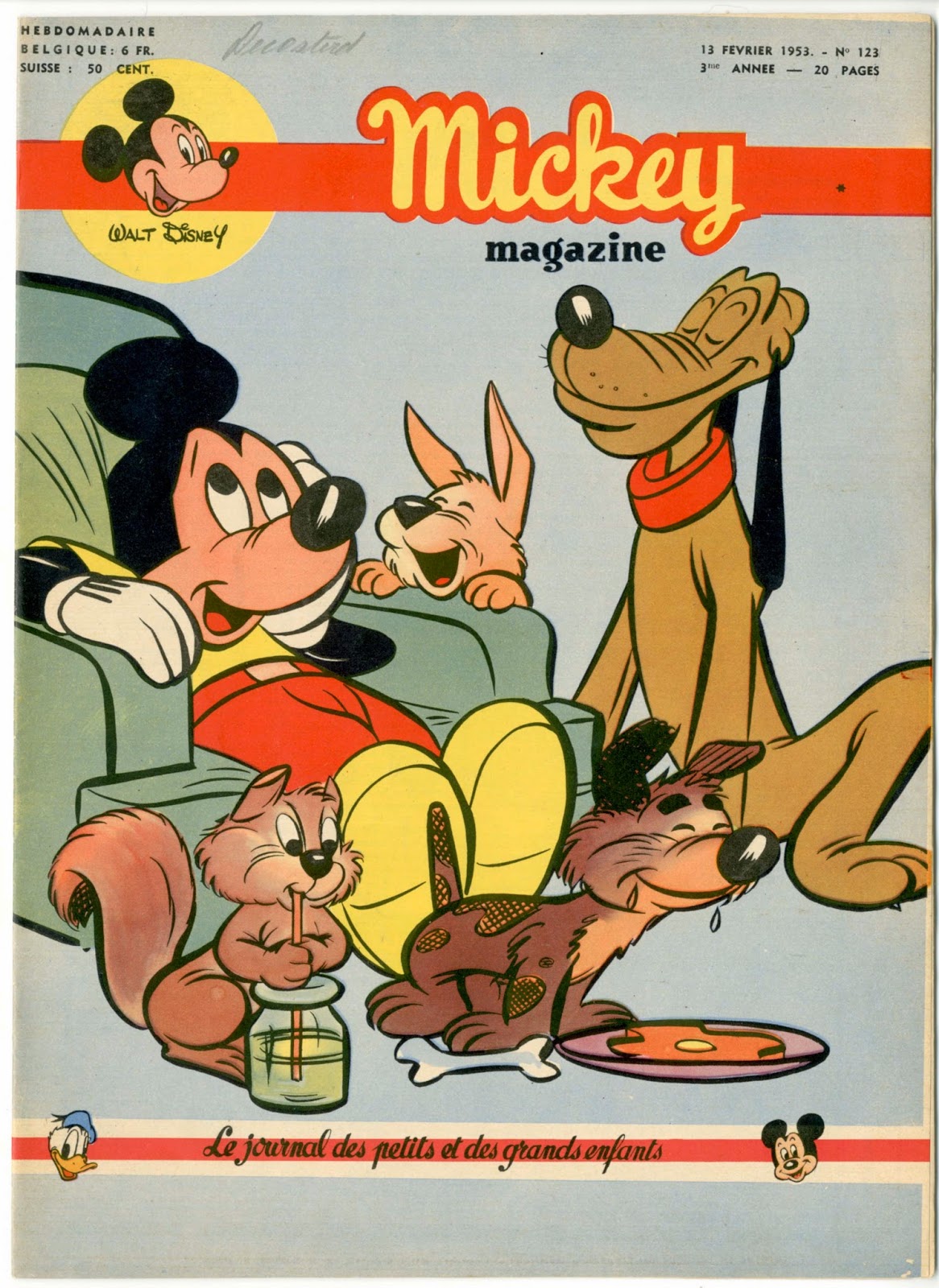 Here are the next two comic strips from the Belgium Mickey Magazine which featured Walt Disney's Robin Hood. This was based on the live action movie which was made in England in 1951.

Apart from the large amount of promotional stills he was able to use for reference, I wonder how many times Jessie Marsh watched the movie before he embarked on his comic strip? 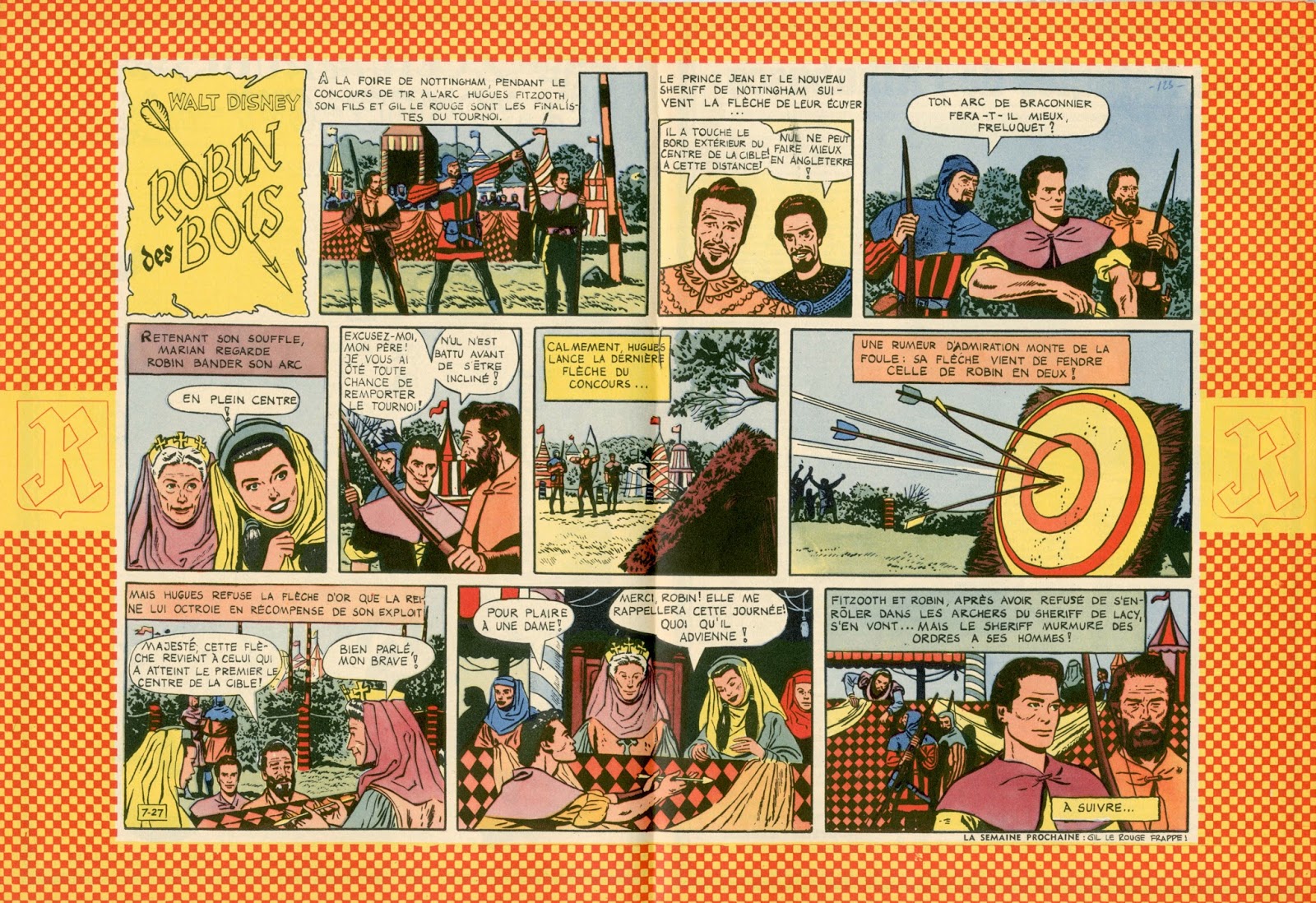 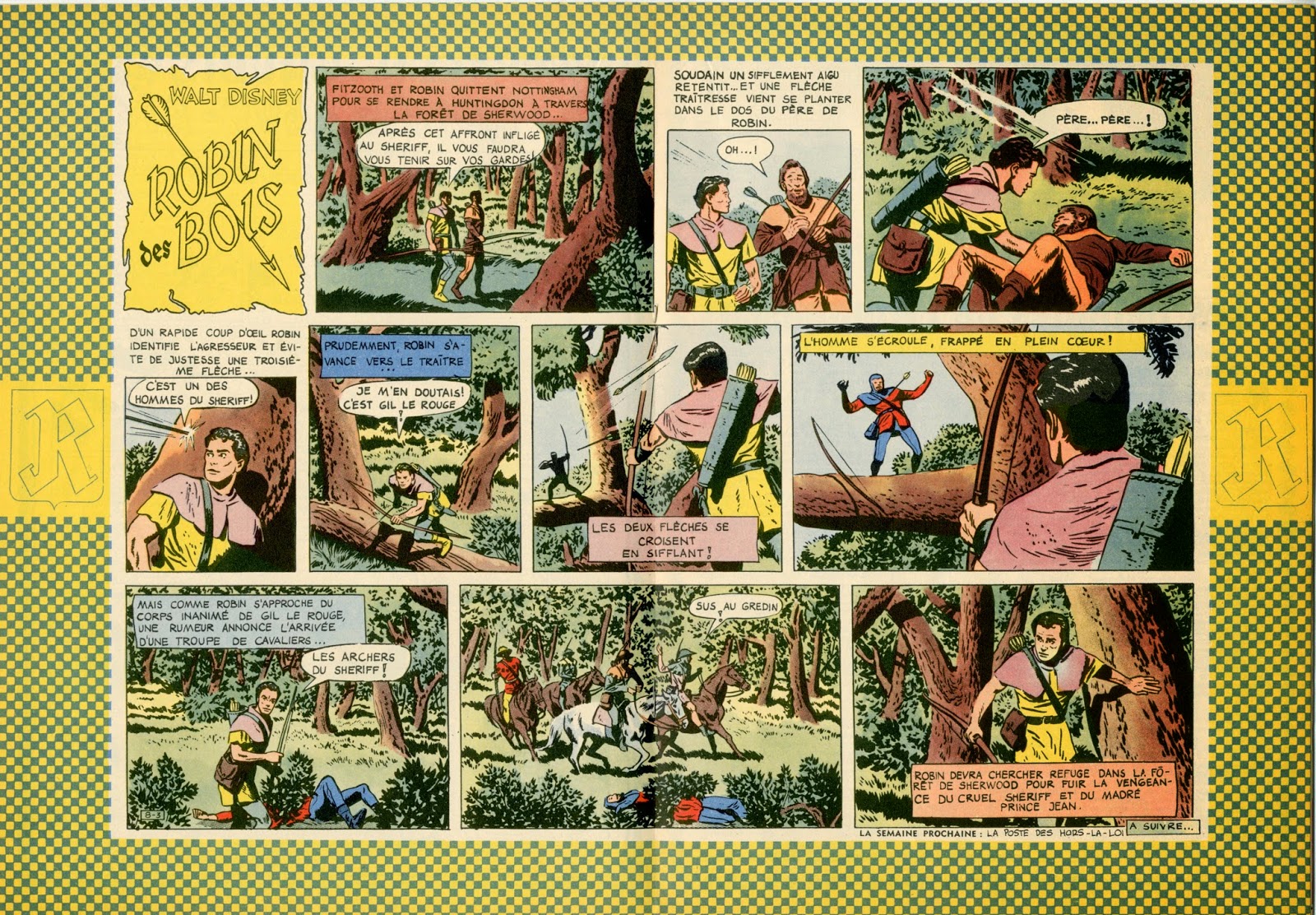 Special thanks to Matt Crandall on the excellent Walt Disney's Alice in Wonderland blog for sending the strips. To read more about the life of the cartoonist and illustrator Jessie Marsh please click here.
1 comment:

Who Played the First Sheriff ?

There are a number of actors and actresses that appear in Walt Disney's live-action movie the Story of Robin Hood and his Merrie Men (1952) that do not appear in the credits. Down the years we have attempted to discover the identities of these people who helped make such a wonderful film. One success was the identity of Giles the pageboy, who I later discovered was played by Cavan Malone. Thanks to Neil and Laurence we also managed to put names to some of  Robin's outlaw band here.

So I was thrilled last week, to receive this email from Christian:

I have researched on subject character who appears only once in the film, that is to say upon King Richard’s departure for the Holy Land. At that moment, the sheriff requests permission to follow his king with his men across the seas, a request granted by his sovereign, prompting the latter to ask his brother Prince John : find a new sheriff !

This character plays a pivotal role in the film, since it justifies the whole plot of Robin becoming an outlaw. Should the sheriff had remained in England, the story would have been very different for obvious reasons.

I believe the Sheriff is played by Irish actor Fred Johnson (1899-1971), a very good character actor who has unfortunately made very few films (mostly horror pictures). Fred Johnson is uncredited in the Story of Robin Hood and no filmography lists him as one of the actors in this film.

Attached is Fred Johnson's filmography and a few pictures.


Christian seems to have found our lost Sheriff!

Fred Johnson was born in Dublin, Ireland on August 6th, 1899 and went on to have a very successful acting career both on the silver screen and television. He was also a screen writer and director.
Johnson is best remembered for his roles in The Curse of Frankenstein (1957), A Christmas Carol (1951) and The City of the Dead (1960).

1955
The Break In The Circle
Movie, Actor - Farquarson

Many thanks to Christian.

To see more about the lives of the wonderfully talented cast of actors and actresses who appeared in the Story of Robin Hood (1952) please click here.
6 comments: