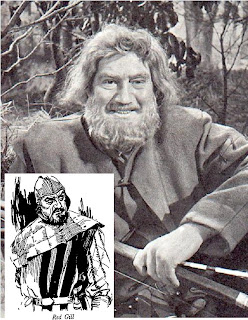 Archie Duncan has the unique distinction in the world of Robin Hood, of playing a villain and a hero. He played Red Gill, the murderer of Robin’s father, in The Story of Robin Hood, and Little John in 105 episodes of TV’s The Adventures of Robin Hood between 1955-1960.

Archibald Duncan was born in Glasgow on 26th May 1914 and was educated at Govern High School. The Scottish actor Russell Hunter, remembers ‘big Archie’ at a Communist Party Rally in support of the Soviet Union and the opening of a second front in 1941. Duncan was then working as a welder at John Brown’s Shipyard.

“I was looking for acting work,” Hunter said. “Duncan came up to me and asked if I he had a big voice? I replied yes! So he invited me through to a back room, where I was asked to read the part of the fascist in the Saturday night production at the Partick Borough Halls. As the original actor had been called up.”

It was at the Citizens Theatre Company that Duncan joined the training ground of many Scottish actors including, Molly Urquart, Duncan Macrae, Gordon Jackson and Eileen Herlie. He then made his Scottish acting debut in Juno and the Paycock, playing all three gunmen, at Glasgow's Alhambra in May 1944.

His London debut came at the Phoenix Theatre in 1947 when he appeared with Alistair Sim and George Cole as Inspector Mc Iver in Dr Angelus.

In-between these various film roles, came the first of his long running TV appearances in the early U.S. series Sherlock Holmes as Inspector Lestrade. But just as he was finishing the final recording of Sherlock Holmes in 1955, he was preparing for a role that he will always be fondly remembered.

6ft. 2inch Archie was to play the part of Little John for Sapphire Films in The Adventures of Robin Hood, at Nettlefold Studios, the first production of the newly formed ITP company (later ITC). It was commissioned by Lew Grade and was shown in the first weekend of Independent television in 1955 and became a massive success, running to 143 episodes. It was during the filming this unforgettable series that Duncan proved to be a true hero and managed to prevent a runaway horse from hurtling towards a group of spectators, consisting of mainly children, watching close by. For this brave feat, he was awarded the Queen’s Commendation for Bravery and £1,360 in damages But it also resulted in him missing the recording of eleven episodes of Robin Hood. So between times, a replacement was found in fellow Scotsman, Rufus Cruickshank.

After TV’s The Adventures of Robin Hood, Duncan’s most notable film roles were in Saint Joan (1957) and Ring of Bright Water (1969). His career in television production carried on with parts in programmes like Z Cars, Hereward the Wake, Orlando, Black Beauty and Bootsie and Snudge. Sadly he passed away in London aged 65 on 24th July 1979.
© Clement of the Glen 2006-2007

I think I remember "meeting" Archie Duncan when I was a child visiting grandparents at Linthouse, Govan. As I recall, Archie Duncan was occasionally in the small Post Office at Linthouse, his mother or sister was the postmistress there. I would have gone into the Post Office, along with other kids at the time, to shout out, "Who killed the otter?" He had been our hero as Little John on TV but whacked Mij in Ring of Bright Water.

Its very good article. It is very helpful us . Thankyou for sharing this great article.