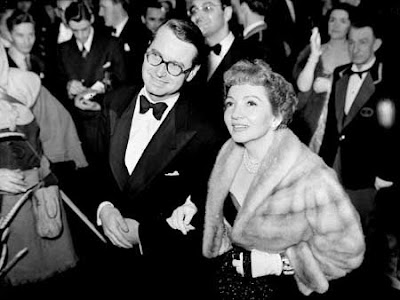 Interesting in that Claudette Colbert must have been filming The Planters Wife at that time which Ken Annakin directed - it was released in Dec 1952 and has very good reviews. Horace has again produced another great photgraph from his collection. He was as at Joan Rice's wedding the following year and produced terrific photgraphs of that event. Hope he has more of the Premiere. Dont think that Richard Todd attended as he was away filming - maybe I have got that wrong - it would be unusual if he was missing from the great event

In Ken Annakin's autobiography So You Wanna Be a Director he does state that The Story of Robin Hood was chosen for a Royal Premiere in London and it proved to be a 'happy, triumphant evening'
As an aside he also says that he was shooting the film for 20 weeks - which underlines the expense of the film and the scale it was on.

Yes I read that. But the research I have done in magazines of the period shows that it was sadly only a gala charity premier.

It could be he has confused the Royal Film Premiere of Rob Roy which was on 26th October 1953.