We have recently looked at some pages from the original script of the film The Story of Robin Hood and his Merrie Men and seen how certain dialogue and scenes were dropped.

Below is a very rare still from the movie that shows the moment when one of the Sheriff's men grabs a child at William Scathelock's farm. But this very rare still is taken from an unusual angle in the field. A shot not shown in the movie. Is this perhaps another example of a scene that ended up on the cutting room floor. What do you think? 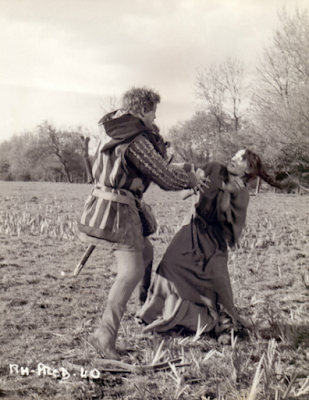 If you have any rare images from the film, please get in touch.

Email ThisBlogThis!Share to TwitterShare to FacebookShare to Pinterest
Labels: Images of a Legend, Picture Gallery

If you have any rare stills from the movie, please get in touch.

This is a still that I have never seen before - and as you say, does not seem to be from the film at all. It must have been shot early in the filming process, possibly early to Mid May 1951, because the trees are barely in leaf here. It comes back to comments we have made before longing for the discovery of all the film out-takes and being able to see them. I wish they could come to light !!

I wish too.....would love to see all the out-takes.....and scenes cut from the film.