Because I will not be posting for a fortnight I have decided to leave you with my favourite publicity still from Disney’s Story of Robin Hood and his Merrie Men (1952). 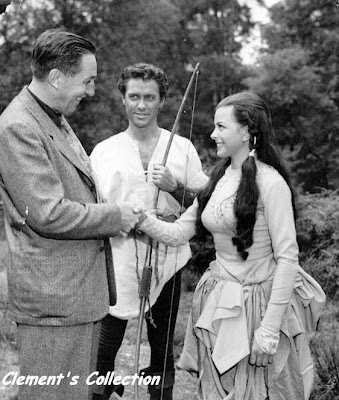 It is from my own collection and shows Walt Disney meeting Joan Rice (Maid Marian) with Richard Todd (Robin Hood) looking on. This must have been a breathtaking moment for the young actress, who had only recently worked as a waitress in a Lyons Corner House.

It is a Reuters image and on the back it has:

Disney visited both location and floor units of the film, which is produced by Perce Pearce at Denham Studios.

As always I would be pleased to read your comments about this picture or about anything else on this blog. Thank you for your continued input and support and I will be posting again soon. 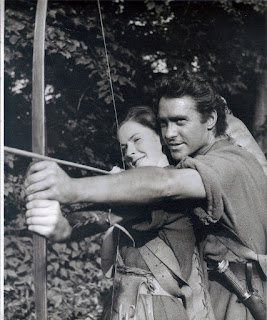 Elspeth with Richard Todd
I was thrilled last week to finally get the chance to talk with Elspeth Gill, daughter of Alex Bryce the second unit director on Walt Disney’s Story of Robin Hood and his Merrie Men (1952). Elspeth is a charming lady and we had quite a chat about those golden days. It was Neil who initially made contact with her last year and she shared with him some wonderful photographs taken behind the scenes, which can be seen here. 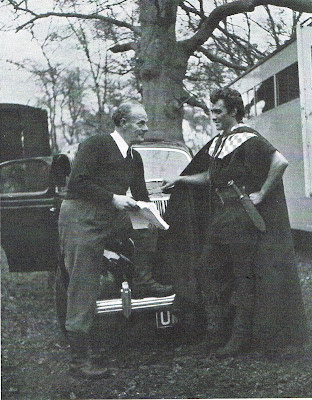 Alex Bryce second unit director with Richard Todd
At the age of sixteen, Elspeth had the enviable experience of watching the filming of Robin Hood at not only Burnham Beeches but also the huge sound stages at Denham Studios. During that period she was living in a house approximately four miles from the legendary studios. When Elspeth entered a fancy dress costume at that time, she was lucky enough to be allowed to borrow one of Richard Todd’s ‘Robin Hood’ costumes. She won the contest-of course!And afterwards rode her horse all the way to the Denham Studios. The security men on the gate were apparently pre-warned of her arrival!
Although it was over sixty years ago, she could vaguely remember meeting Walt Disney and described the Art Director, Carmen Dillon, as a formidable woman.  Richard Todd she said “was such a lovely, lovely, man.” He became a friend of the family and Elspeth had fond memories of Scottish dancing with him during the making of the later movie, Rob Roy.  Her father, she explained, loved making those live-action Disney movies. 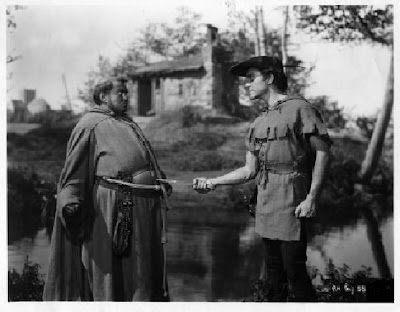 James Hayter (Friar Tuck) and Richard Todd (Robin Hood)
During the filming of the scene in which Robin Hood meets Friar Tuck (James Hayter), Richard Todd asked Elspeth to keep hold of Barron, his Great Dane. Unfortunately Baron was a great deal stronger than Elspeth and she was dragged by the huge dog downwards towards the river! 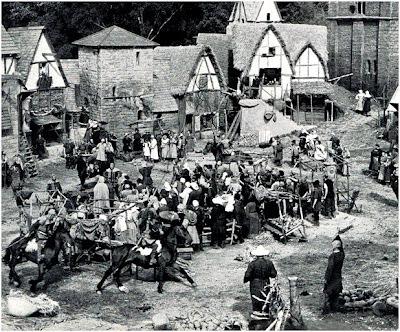 Nottingham Town Square
Elspeth could also remember being somewhere high up during the filming of a scene in ‘Nottingham Town Square.’ But she kept feeling something hitting her body and when she looked around, she realised it was Peter Finch (Sheriff of Nottingham) throwing pebbles at her!

Peter Finch as the Sheriff of Nottingham

I hope to be able to talk to Elspeth again very soon, and capture some more of her  wonderful memories of those golden days! 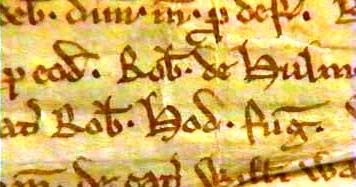 Still the most tantalising discovery, in the search for a real Robin Hood, was the candidate first put forward by L. V. D. Owen of Nottingham University in 1936.  Owen had previously given consideration to Joseph Hunter’s theories about the Robert Hood of Wakefield, but suggested this historic figure as a contender for the inspiration behind the Geste.  He discovered in the government pipe rolls between the years 1225-1234 that the Sheriff of Yorkshire had accounted for the chattels of a Robert Hood fugitive. Also, under the year 1228 the outlaw’s name is written in its colloquial form as ‘Hobbehod.’
The merit of this identification, argued Owen, was that it allowed Robin to be active during the reigns of Richard I and John, and for him to become a legend by the date of Piers Plowman. Owen also noted that rioters in Yorkshire during the 1230’s, led by Sir Robert Thweng, protesting against foreign clergy, sold grain cheaply and gave some away for the benefit of the poor.
Below is a basic timeline of events that surround the discovery by Owen and the follow-up investigation by Dr David Crook, who also argued that this Robert Hood ‘was the only realistic candidate already in the field.’ Crook investigated further the career of Eustace of Lowdham, the Sheriff of Yorkshire at that time and also his pursuit of Robert of Wetherby.
1224:
Philip Marc, the notorious Sherriff of Nottingham is replaced by Ralph fitz Nicholas. Four months later on the 29th April 1224 Marc’s deputy known as Eustace of Lowdham became Sheriff of Yorkshire.
1225:
12th July: At Winchester the King and Justicar authorized a writ to the barons of the exchequer to allow the Sheriff of Yorkshire 40 shillings spent by him on the royal order, to hire sergeants to ‘seek and take and behead Robert of Wetherby, outlaw and evildoer of our land.’
From the following years account we learn that a further 28 shillings were spent on the operation, and the leader of the sergeants was a man called William the Vintner.
On the 25th July Robert de Lexington held assizes at York as head of the Royal Justices to hear pleas of ‘novel disseisin’ and ‘mort de ancestor’. When the penalties were put in charge at the Exchequer they included:


“32 shillings and sixpence in the matter of the chattels of Robert Hood fugitive.”
Unfortunately Lexington’s plea roll, which would have given detail of the offence he was accused of has not survived.
On the 27th November, when Eustace of Lowdham accounted for his shire at the Exchequer, as he had done so often for Philip Marc, he claimed 2 shillings ‘for a chain to hang Robert of Wetherby.’
Nothing is further known of Robert of Wetherby but the purchase of the chain seems to imply that he was no ordinary criminal and hung up and put on display.
1227:
Every Michaelmas the clerks of the Exchequer recorded the sums of money paid into the Royal Treasury by the sheriffs. The name Robert Hood appears in the Yorkshire account in nine successive pipe rolls from 1226 -1234, six times as Robert Hod and once in 1229 as Robert Hood. But also in 1227 and 1228 in its colloquial form as ‘Hobbehod.’ 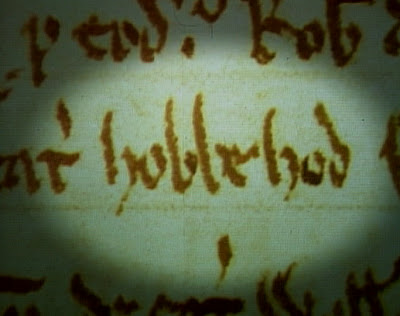 The name ‘Hobbehod’ could be a variant outlaw name to be associated with the recurring figure ‘Hobbe the Robber’ mentioned in PiersPlowman and also the contemporary ‘John Ball Letters’ of the 1381 Peasants Revolt. Its mythological connotations bring us to Robin Goodfellow and Hobgoblins and it has also been suggested that the fugitive might have rode a small horse-a hobby. But it is more likely the scribe used the Middle-English ‘Hob’ as another form of Robert/Robin.

Written in the margin is evidence to show that the debt was due from the Liberty of St. Peter York. St. Peter is inserted in the margin of the roll next to his name and again in 1234 when the name is preceded by a cross. So in effect the fugitive was a tenant of the Archbishop of York or in some way a subject of his jurisdiction. Hood’s chattels were therefore claimed and eventually granted to the Archbishop.

1232: Eustace of Lowdham becomes Sheriff of Nottinghamshire and Derbyshire.

1227 /1232: Eustace of Lowdham was justice of the gaol delivery for Nottingham.

From all this we have two men sharing the same Christian name, both subjects of the Archbishop of York, hunted in those summer days in Yorkshire possible around Barnsdale in  1225. Pursued by someone who as a former ‘working Sheriff of Nottingham’ could have been known by that title by the people of Yorkshire. 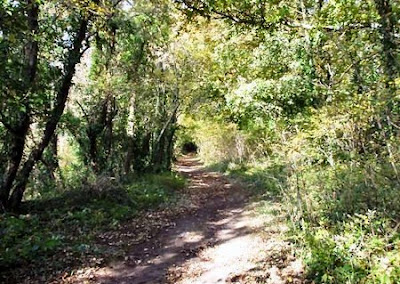 Dr David Crook says that it is ‘conceivable’ that Robert of Wetherby and Robert Hood were one and the same man. ‘Wetherby had been outlawed by July, possibly before, whereas Robert Hood was described merely as a fugitive; that would usually be taken to mean that he was a subject who had fled, but the confiscation of his chattels could have been noted at a time when he had not yet been outlawed.’

The fact that Eustace of Lowdham had been clerk and ‘working’ Sheriff of Nottinghamshire and Derbyshire’ from 1217 till 1224 under the hated sheriff, Philip Marc, could explain the links with Nottingham and Sherwood. Eustace had been an established man of property and man of affairs in his native village of Lowdham, near Sherwood, in Nottinghamshire during the reign of King John.

I am not convinced that Wetherby and Robert Hood were one and the same person. But this is as close as we have come so far in search of an historical outlaw, who fits the early Yorkshire locations mentioned in the ballad, The Geste of Robyn Hode. This Robert Hood owed money to St. Peter’s York which would explain the ballad hero’s hostility to the established church in that area. Some writers have suggested that Robert Hood/Hobbehod might have followed Eustace from Yorkshire to Nottingham to pursue a vendetta against a Sheriff who had seized his property. This would certainly explain the conundrum over the two locations used in the ballads.

Professor J.C. Holt, the leading authority on research into the outlaw, describes Hobbehod as ‘the only possible original of Robin Hood so far discovered, who is known to have been an outlaw.’ What do you think?