Geoff Waite has very kindle sent me this article on Patricia Driscoll from the 1958 Annual ‘Girl Film & Television’, which is copied below. Pat took over from Bernadette O’Farrell as Maid Marian in the third and fourth series of The Adventures of Robin Hood which aired on ITV in Britain from 1955 till 1960. The series eventually ran to 143 half-hour black and white episodes and is still very fondly remembered. 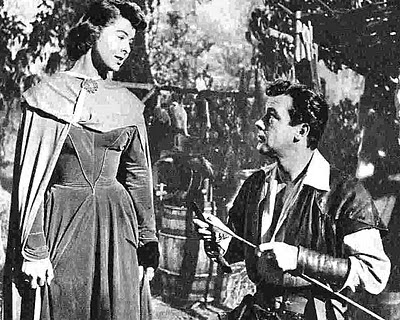 Pat Driscoll-A Girl Who Adds Glamour to the Robin Hood Show.
"An unexpected telephone call from the Nettlefold Studios, at Walton-on-Thames, to the London mews flat of Pat Driscoll hoisted her to fame in the role of Maid Marian in TV’s ‘Robin Hood.’

When the phone rang, Pat was doing a spot of gardening-if ‘gardening’ is the right word to use about tending window boxes outside a town flat!

The odd thing was that she seldom saw TV. There was no room in her small home for a set, and she didn’t like badgering neighbours to look in at theirs.

Like her predecessor in the part, Bernadette O’Farrell, Pat was born in Cork. When her mind was made up that acting was the life for her, her parents sent her to RADA. After that, she worked her way around the country with various repertory companies.

While with the Manchester Rep she met and married a dark Scot, Duncan Lamont. Duncan has also appeared in ‘Robin Hood’ from time to time. Their first home was in a London mews flat, where hammers, tacks, paint rollers and wallpapers made many demands on leisure time.

Pat's first TV success came in 1953, in a show called ‘Whirligig.’ She also appeared in the film Charley Moon with Max Bygraves. Until the Maid Marian part came along, she was working in both ‘Listen With Mother’ and ‘Looking With Mother.’

Pat has been used to handling horses all her life, and had her own pony as a child and did a lot of show-jumping, in the modern manner. In fact, she was once a leading pony rider at the Olympia Horse Show. When she was eleven year old, Pat won a jumping competition at the Arundel Gymkhana.

This helped a great deal when she took on the role of Maid Marian-though she found she had to learn to ride side-saddle to conform to medieval custom. She took lessons from an expert to steer an elephant in the right direction in Charley Moon. ‘After that, riding side-saddle on a horse was child’s play,’ she’ll tell you.

Pat’s favourite hobby, when she has time for it, is salmon fishing. When she is filming, an alarm clock shatters her sleep at six-thirty in the morning. After this early start she is ‘on set,’ ready with her make-up completed, at the Nettlefold Studios by eight thirty.

She likes to tell about her own shame when she first began working there.‘Puzzled, I was, by the plaque over the entrance HEPWIX 1898, until someone told me it was a memorial to Cecil Hepworth (part of his own name coupled with that of a fiend). He was one of the pioneers of film making, who built the place in the back garden of his house by the Thames.’

The hooks on which Hepworth slung his film negative to dry are still there, an interesting link with the television films of today."

Many thanks to Geoff for sending this article.

She was married to Duncan Lamont who appeared in so many British films over the years. She was a good Maid Marian as was Bernadette O'Farrel who she took over from - neither as good as Joan Rice in the role though. I remember her in the childrens programme Picture Book also and in the film Charley Moon with Max Bygraves starring.

I have very fond memories of 'The Adventures' and am still working my way through my box set of the whole series. I preferred Bernadette O'Farrell-if I'm honest, but Pat did a great job.

I can just about remember 'Picture Book.'