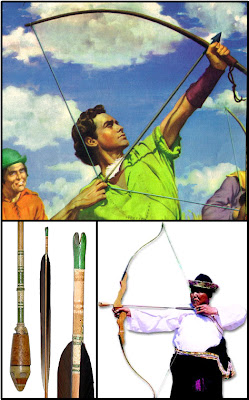 The use of whistling arrows, by Robin and his band of outlaws in Disney’s Story of Robin Hood, is a unique addition to the legend by Lawrence Edward Watkin. But not as far fetched as some might think.

In fact, although now hardly ever used, whistling arrows were invented probably by the Nomads of Central Asia around 1,500 years ago. They used the whistling arrows to enliven their celebration of bumper harvests and major festivals. The earliest literary Chinese reference to such an arrow is in the Historical Annals of Sima Quian and it was Miedun who made whistling arrows and drilled his troops in their use. He ordered that:

when the whistling arrow is fired, anyone who does not obey the person who fired it will be executed...

Mongolians often used arrow whistles during hunting, after they discovered that the sound of the arrow flying above the animal’s head, made it stop, giving time to loose a second conventional arrow for the kill.

But apart from hunting, the whistling arrow was primarily used for signalling and sending messages during battle, particularly amongst the Japanese, who would often tie small notes (called Ya-Burne) around the shaft of the arrow as it whined through the air. This sound that the whistling arrow made, was also used against the opposition as a form of psychological warfare during battle and the Japanese often would have their massed ranks of archers send off hundreds of whistling arrows, filling the sky with an eerie, threatening noise above the heads of the enemy. In Samurai times such whistling arrows were fired to signify the beginning of a battle. In Shinto archery rituals, whistling arrows are used to call upon the attention of the gods.

Whistling arrows were used in medieval Europe, although details of this are rather slim. But it is known that they were combined with barbed arrows during battle and targeted at the charging horses to send the animals into panic and confusion. Therefore disrupting the advancing knights.