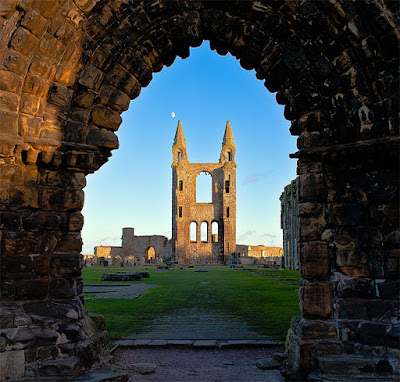 St. Andrews, Fife in Scotland
Robin Hood’s activities were never recorded by a contemporary chronicler. There is no surviving evidence that suggests that anybody knew him, his family or why he was outlawed. But some chroniclers seem to have believed he existed and the earliest of these was Andrew de Wyntoun (c.1350-c.1423). Andrew was an Augustinian prior of St. Serf’s (Kinross, Scotland), a religious house set on an island in Loch Leven on Serf's Inch, and later a canon-regular of St. Andrews Augustinian priory in Fife Scotland.

Very little is known of de Wyntoun’s education or early career, but he wrote ‘The Orgynale Cronykil of Scotland' at the request of his patron Sir John of Wemyss. The subject of the 'Chronicle,' is the history of Scotland from the mythical period (including the history of angels) to the accession of James I in 1406. In his manuscript he also tells the most famous of all his stories—Macbeth and the weird sisters, and the interview between Malcolm and Macduff.

Although very few critics, down the centuries have found any poetic merit in Wyntoun’s work, it does shed very important light on material about Scotland’s history that is not found anywhere else.

Written at the age of seventy, his chronicle is a long (preserved in nine manuscripts) and prosaic vernacular compendium in octosyllabic couplets, that traces the history from a very pro-Scottish viewpoint. He is especially severe on the malpractices and war crimes of Edward I who is described as a ‘tyrand’ and the ‘curseyd’ one, in his war against the Scots. Wyntoun particularly points to the massacre at Berwick and his treatment of the national hero William Wallace. 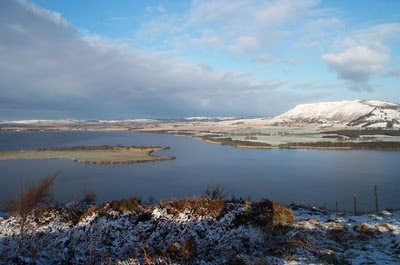 
Wyntoun’s chronicle was probably completed before 1420. He puts briefly between the years 1283 and 1285:

This translates from the medieval Scots as ‘little John and Robert Hood were well praised (as) forest outlaws (waythmen, i.e., men who lie in wait/ ambushers); in this period they did their deeds in Ingilwood and Barnsdale” 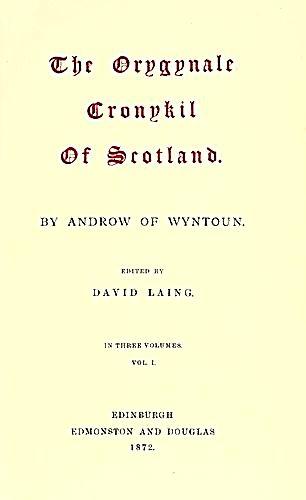 The ‘tyme’ in which Wyntoun places Robin’s activities in the ‘Chronicle’ was 1283. There are two striking points in this entry. The mention of Little John at the beginning of the first line might indicate that Robin may not have been the automatic choice as leader. Or it could be that his name placed first in the line simply provided a convenient rhyme of ‘Hude’ and ‘gude.’

Also surprising is the fact that there is no mention of Nottingham or Sherwood. This may show the Scottish viewpoint, with Inglewood (English wood) a forest just south of the Scottish border in Cumberland and Barnsdale in Yorkshire on the old Roman road between London and Edinburgh. The famous hunting ground of Inglewood, stretching from Penrith to Carlisle was the location of another medieval ballad hero and outlaw, Adam Bell. It was also used as the scene for several of King Arthur’s legendary adventures, which may have influenced Wyntoun.

But Wyntoun does not seem to question that Robin Hood and Little John existed, he indicates that they were real historical outlaws, living in the decade before Wallace’s rebellion, who were widely praised. Unfortunately he supplies no indication as to what evidence he based his date on.

To read more about historical evidence behind the legend of Robin Hood, please click on the label 'Robin Hood History.'

More proof:) Wouldn't it be just wonderful if, in our lifetime, some great researcher stumbled across a medieval chronicle that gave specific info about Hood and his men, and even better find would be a family chronicle where we could trace his descendants!

I have been out of state on business and have missed your blog! Glad to be back:)

Nice to have you back Avalon X

Yes it would be wonderful to find a document like you describe. Down the centuries we have found many Robert/Robin Hoods,some have been outlawed, but it is finding evidence that he sparked the legend that is the main problem.