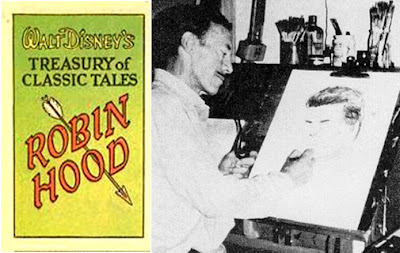 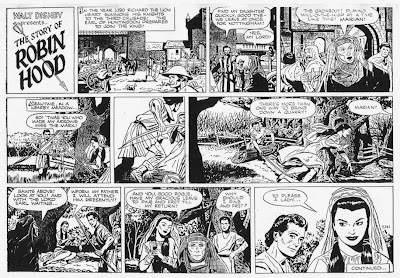 The Story of Robin Hood was the first Walt Disney live-action movie to be adapted to a comic strip. This was yet another way in which Disney was able to advertise his new releases and keep the film fresh in the audiences mind. Above is the original Sunday Strip ink drawing, before colorization, by the comic book artist and animator Jesse Mace Marsh.
Jesse was born in Florence, Alabama on July 27th 1907 his father was a small business contractor. From a very young age, Jessie had an interest in art and studied artists he admired in the local library and the museums. He was a self-taught and aspired to be a fine arts painter.
When Jessie was twelve years old his father moved the family to California, where in 1939 his son’s talents were first noticed and used by the Walt Disney Studio. He was involved in creating the studio’s animated classics, such as Pinocchio and Fantasia, but by 1945 he had also joined some fellow Disney artists in freelancing at Western Publishing.
1n 1947 he began drawing his main claim to fame - the Tarzan Comic for Dell (later Gold Key Comics), from the comfort of his new studio at his home. Other strips were created there, including Gene Autry, Daniel Boone, Davy Crockett and many more.

But he also remained intermittently working for Disney, which included drawing their Sunday newspaper strip that usually featured the current Disney movie as a tie-in. His first was The Story of Robin Hood which had been released in America a few weeks earlier. He began Robin Hood on July 13th 1952 through until December 28th 1952 and worked alongside the strip writer Frank Reilly.

I expect many of you will be keen to see more of this comic strip and Mace’s fine quality art work. So stay tuned!

Email ThisBlogThis!Share to TwitterShare to FacebookShare to Pinterest
Labels: Comic Strip, Images of a Legend, Memorabilia

Has Marsh's Robin Hood work ever been collected and published?

Not as far as I know, but I will make a few enquires and get back to you.

I have just received this from John Adcock


Hi Clement,
I believe that the only reprint was an abridged edition published as a 52 page Dell comic book. The entire comic strip would make a great publication if a complete run of the comic sections could be found.

Thanks Clement. Probably impossible to get or worth a fortune.

The Dell 1952 comic book wasn't a reprint of Jesse Marsh's newspaper strip. It was a completely independent version. It was illustrated by Morris Gollub, a frequent contributor to Dell, who produced numerous strips and painted covers. Like Jesse Marsh he began his career as a Disney animator. Check the Grand Comics Database website. I too would love to see Marsh's version reprinted in book form.

They flew under the radar,but IDW has put out three volumes of WALT DISNEY'S TREASURY OF CLASSIC TALES, reprinting the newspaper strip from the beginning. That's good news for Marsh fans. His art is prominent in all three volumes, including the ROBIN HOOD adaptation. There may not be a fourth; all the Jesse Marsh strips, however, have seen print.