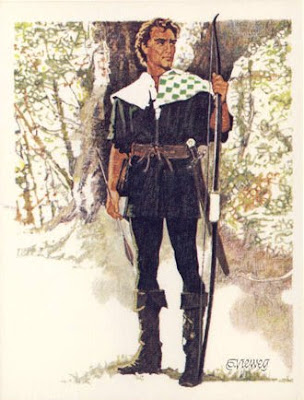 I was pleasantly surprised to see this on Ebay recently.

It is a Players 'Tom Thumb Cigarette Card' depicting Robin Hood. The artist was obviously impressed by Walt Disney's film version of the legend and decided to base his illustration on Richard Todd's portrayal of the noble outlaw. The artist must have had very good taste and a lot of talent. I wonder if any of the other characters from the film were used.

If you know of any more, please get in touch at disneysrobin@googlemail.com.

That is an absolute gem. Did you bid?

really nice one this, did you win this gem Clement?

This is one that got away!

I'm having problems with my computer at the moment. It doesn't seem to want to post the correct typefaces etc.

So sorry if the posts are hard to read but normal service will be resumed as soon as possible!

I think that there must have been other painted cards in this series, i cant believe there was just this one. i will keep looking.

Once again this underlines how well, even at that time, the Disney marketing was cranked up. I am old enough to remember the film and its release and there seemed to be terrific interest at the time. Scenes were often shown on TV - albeit in Black and White. This sort of marketing operation can be seen better now with such things as the articles in Picturegoer about Joan Rice being cast as Maid Marian as well as many other examples. This playing card is certainly a very interesting item and would have been sanctioned by Disney I am pretty sure. Also anyone old enough would remember the huge merchandising that accompanied Davy Crockett a few years later when it came to the screen. I really admire from a business angle this side of the Walt Disney organisation.