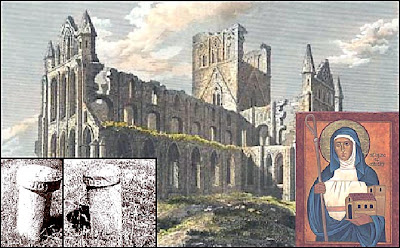 The atmospheric 13th Century ruins of Whitby Abbey stand on the steep windswept headland overlooking its picturesque old whaling town and the North Sea. This once magnificent monastery was founded in the seventh century by the Saxon princess St Hild. She later became the focus of many traditional stories and miraculous deeds, including ridding the town of snakes by turning them to stone. Another legendry character linked with this dramatic, monastic site, is Dracula the vampire, the creation of one time Whitby resident, Bram Stoker. So with the fishing village, known as Robin Hood’s Bay, six miles along the coast and the bronze age burial mounds at Stroupe Brow, dug into the moorland about a mile away, known by the locals as Robin Hood’s Butts, it was inevitable that down the centuries, local stories about the outlaw hero would emerge.

Lionel Charlton often known as the first historian of Whitby, was born at Hexham about 1722. Described as lame from his youth, halting with one leg, and having one hand shrunk up, did not prevent him studying at Edinburgh University and becoming a land surveyor and teacher of mathematics. About 1748, Charlton settled in Whitby, in North Yorkshire, where he would stay for the next forty years running his school in the old town house. But it was towards the end of his life that he undertook the task for which he became famous, writing The History of Whitby and Whitby Abbey which was published in York, in 1779.

With free access to the ancient records of Whitby Town and its Abbey, given to him by the Lord of the Manor, Nathanial Cholmley, Lionel Charlton began to painstakingly decipher the rolls of parchment. His groundbreaking work is today often criticized for his occasional fanciful detours away from the restraints of historical research and his piece on Robin Hood and Little John’s visit to Whitby Abbey, is a good example. It is also interesting to note that Charlton was assisted by Dr Thomas Percy (1729-1811), the first of the great ballad collectors, and author of ‘Reliques of Ancient English Poetry’ published four years before Charlton’s work. Percy’s collection on Robin Hood and in particular the unusual later ballad Robin Hood’s Fishing, commonly known as The Noble Fisherman: Or Robin Hood’s Preferment, probably inspired, what Professor Dobson describes as Charlton’s ingenious powers of invention, about Robin Hood’s visit.

Now, quoth Robin Hood, I’ll to
Scarborough goe,
It seems to be a very fair day,
Who tooke up his inn in a widow
woman’s house,
Hard by upon the waters gray.
(The Noble Fisherman)

Tradition informs us Lionel Charlton begins, that in one of Robin Hood’s peregrinations, he attended by his Little John went to dine a Whitby Abbey with the Abbot Richard [de Waterville] , who having heard them often famed for their great dexterity in shooting with the longbow, begged them after dinner to show him a specimen there of; when to oblige the abbot they went up to the top of the abbey, whence each of them shot an arrow, which fell not far from Whitby-Laths, but on the contrary side of the lane; and in memorial there of, a pillar was set up by the abbot in the place where each of the arrows was found, which are yet standing in these our days; the field where the pillar for Robin Hood’s arrow stands being, still called Robin Hood’s Field and the other where the pillar for Little John’s arrow, John’s Field. Their distance from Whitby Abbey is MORE THAN A MEASURED MILE, which seems very far for the flight of an arrow, and is a circumstance that will stagger the faith of many; but, as to the credibility of the story, every reader may judge thereof as he thinks proper; only I must here beg leave to observe that these very pillars are mentioned, in the old deeds for that ground, now in the possession of Mr Thomas Watson.
(History of Whitby, York, 1779.)

.......they both shot from the top of the abbey, and their arrows fell on the west side of Whitby Lathes, besides the lane leading from thence to Stainsacre; that of Robin Hood falling on the north side of the lane, and that of Little John about 100 feet further, on the south side of the lane. In the spot where Robin’s arrow is said to have lighted stands a stone pillar about a foot square, and 4 feet high; and a similar pillar, 2 1/2 feet high, marks the place where John’s arrow fell. The fields on the one side are called Robin Hood Closes and those on the other Little John Closes. They are so termed in the conveyance, dated in 1713, from Hugh Cholmley Esq.

In the 1890’s both pillars were seen lying in a ditch of the field bearing their name. One had been removed because it was in the way of the farmer’s mowing machine ! And in 1937 one of the stones was put to use as a field roller at Summerfield Farm near Hawsker Church.

In 1903 two new pillars were erected and described by Stanhope White in Standing Stones & Earthworks on the North Yorkshire Moors (1987) as :

......two saddle-like stones, round pillars with small mushroom caps; the rim of the first is engraved Robin Hood Close and the other Little John Close......It is not improbable that these two stones have replaced two Bronze Age standing stones; they would have attracted tales of Robin Goodfellow; when Robin Hood began to appear as a folk hero his name replaced the earlier leaders name, and no doubt some good burgher of Whitby replaced the ancient stones with these more decorative modern ones!