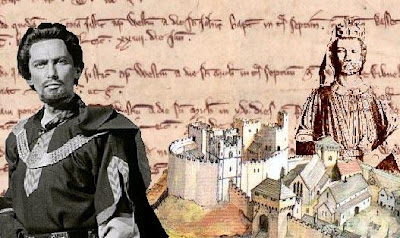 Down the centuries, historians and antiquaries have suggested a variety of contenders for Robin Hood’s arch enemy, the evil Sheriff of Nottingham. If you click on the Sheriff of Nottingham in the label column opposite you will see the details of this powerful position and how it was often abused by the nobleman who were given the title. One such contender who is often put forward, is the Angevin soldier, Philip Marc/Mark, more recently the subject of a novel by Richard Cluger. Below is a chronolical table giving details from surviving medieval documents of his life, giving us a small insight into someone who just might have fired the imagination of the balladeers.
1204: King John establishes a completely new administration in the northern counties of England. Of the sheriff’s of the earlier years, only one remained and he was in Northumberland. In an attempt to increase his war chest and regain his lost territories in Normandy, Maine and Anjou, John made his new sheriff’s more accountable for the profits of their office.

Gerard d’Athee had been a soldier in the service of the Plantagenet's since Richard’s reign. King John had placed him in command of the great fortress of Loches, the castle of the Anjou family, but when the castle fell to Philip Augustus, John paid 1,000 marks ransom for Gerard and brought him to England along with his wife, son and other relatives. These included Engelard de Cigogne, Peter, Guy and Andrew of Chanceux, Guy de Cigogne, Geoffrey de Martigney and his brothers, Philip Marc and his brothers and his nephew Geoffrey. The three villages of Athee, Cigogne and Chanceux lie close together, not far from the cities of Toures and Loches, in Touraine. The men were all able, Angevin soldiers and efficient, heavy handed administrators and in 1204 Gerard d’Athee became Sheriff of Nottinghamshire and Derbyshire, with Philip Marc, his relative, as his assistant.

The appointment of these foreign soldiers to English shrievalties is fiercely resented by the barons. Roger of Wendover later described Gerard d’Athee and his nephew Engelard de Cigogne as King John’s consilarios iniquissimos (evil councillors).

1207: Marc is ordered to get £100 from the three men of Newark and others, for the king. Richard de Lexington falls out of favour with King John and loses his manor because of maladministration of the forest. The manor of Lexington and forest was now administered by Brian de Lisle.

1209-1224: Philip Marc is made High Sheriff of Nottinghamshire and Derbyshire and keeper of the parks, including Bestwood and Bulwell Wood. He was granted the manor of Bulwell at the northern edge of Sherwood Forest and to present the priest for life.

For fifteen years, Marc is said to have envenomed the local politics of Nottinghamshire and Derbyshire. The conduct of his shrievalty included robbery, false arrest, both secular and ecclesiastical. Ralph of Greasby, Roger de Montbregon, Robert de Neville, Matilda de Caux (former hereditary royal keeper of the forests of Nottinghamshire and Derbyshire) and the monks of the house of Grosmont near Whitby all clashed with him.

1212:Nicolaa de la Haye and Philip Marc, then castellan and Sheriff of Nottinghamshire and Derbyshire, were made joint sheriff’s of Lincolnshire.

While at Nottingham, King John summoned the sheriff’s. He told them to each bring six knights of their shires, who were to do what we tell them.

1213: An outer bailey is added to Nottingham Castle and a tower was built on the motte. Philip Marc supervised King John’s construction plans including a curtain wall which is marked by the location of the present gatehouse.
Siege machines for attack and defence are also included.

Clause 50: We will dismiss completely from their offices the relations of Gerard d’Athee* that henceforth they shall have no office in England, Engelard de Cigogne, Peter and Guy and Andrew de Chanceaux, Guy de Cigogne, Geoffrey de Martigny with his brothers, Philip Marc with his brothers [A Reginald Marc, said to be Philip’s brother, held Annesly in 1220] and his nephew, Geoffrey, and all their followers.

Clause 51: Immediately after concluding peace, we will remove from the kingdom all alien knights, crossbowmen, sergeants and mercenary soldiers ( alienigenus milites, balistarios, servientes, stipendiarios) who have come with horses and arms to hurt of the realm.

*But Engelard de Cigogne, Philip Marc and the kinsman of d’Athee remained in the country and played a part in the administration under Henry III.

Philip Marc was never removed from his posts as sheriff of Nottinghamshire and Derbyshire and constable of Nottingham Castle. It was from his base at Nottingham Castle that he had directed the royalist cause on behalf of King John, acting more like a military overlord, in the north and east midlands during the civil war. With a triangle of fortresses under his command, south of Lincoln, including Newark and Sleaford.
1220: In April many complaints were made to the young Henry III and the papal legate, Pandalf, about the number of Philip Marc’s men in the forest of Nottinghamshire and the grave exactions and oppressions they were making. Marc eventually completed a survey of his own and reported to the king on how many royal officials he needed in the forest. But Marc was abruptly told to withdraw his men and not to bother Maud de Caux who had recently had her hereditary forestership restored. She was to remain in office until her death in 1224.
1224: Philip Marc is replaced by Ralph fitz Nicholas as Sheriff of Nottinghamshire and Derbyshire.


1234: Brian de Lisle the High Sheriff of Nottinghamshire of Derbyshire, accounted for Ann, Marc’s widow 100 shillings per year as long as she lived at Bullwell Manor near Sherwood Forest.

1265: The protection racket passed by the successive Sheriff’s of Nottingham and Derbyshire was stopped by a Court of Law. The growth of the importance of Justices of the Peace starts to limit the power of the sheriff’s.

Email ThisBlogThis!Share to TwitterShare to FacebookShare to Pinterest
Labels: Sheriff of Nottingham

A lot of good research has gone this. im impressed!