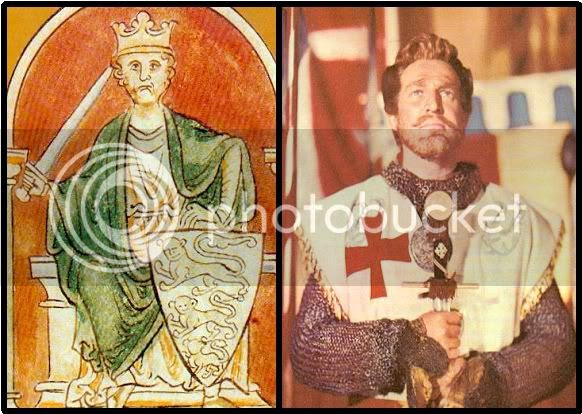 In nearly every Robin Hood movie, the story is set during the reign of Richard I (1189-1199). Walt Disney’s ‘Story of Robin Hood’ is no different and the part of King Richard was played by British actor Patrick Barr, who later resurrected the role in the well loved TV series ‘The Adventures of Robin Hood’ four years later.

The actual history of the reign of Richard I in no way lets down the legend and it was inevitable that he would be linked with that other English hero, Robin Hood. Firstly by a Scottish chronicler, John Major in 1521 and later by the playwright Anthony Munday and novelist Sir Walter Scott.

In October 1187 Jerusalem had fallen to the armies of Saladin and the following year Richard made his vows as a crusader. The English treasury was well supplied, thanks to the ‘Saladin tithe’ imposed by his father, Henry II. But Richard’s crusade would demand a great deal more.

At the time of his coronation Richard Plantagenet, Count of Anjou and Maine, Duke of Normandy and Lord of Aquitaine was in his thirty third year. A handsome six-footer, with long, straight limbs, deep chest and reddish-golden hair, he had a surprisingly pale complexion and dazzling blue eyes. He looked the model of the knightly warrior. Violent in his ‘Angevin’ rage and jealous of his honour, he could also be generous. Always the first to attack, the last to retreat, he was described by an enemy as the ‘most remarkable ruler of his times.’

A typical picture is of Richard wading ashore at Jaffa to relieve the hard-pressed Christian garrison calling, “shame on him who lags behind!” He was reckless in skirmishes, could joke in Latin, compose songs, took the ‘impregnable’ Taillebourg in Saintonge in three days and raised Chateau Gaillard within two years. Richard the Lionheart once told the Holy Roman Emperor, “I am born of a rank which recognizes no superior but God.”

In 1189 Richard was anxious to be off on the exciting adventure of a crusade, already before his coronation he had ordered a muster of ships. Everything was sacrificed to raising money for it, loyal officials were made to pay heavily for the new king’s goodwill, Sheriff’s were discharged from office and new ones were installed, who would pay to be admitted. Everything was for sale-privileges, lordships, earldoms, castles, towns. At the time he said he would sell London if he could find a buyer.

But a coronation was the most important event in medieval political life, so Richards crusading plans were put on hold while he prepared for his, in Westminster Abbey on Sunday 3 September 1189. In their descriptions of the ceremony the chroniclers have given us our first breathtaking insight of an English coronation which I could not resist including.

Attended at his lodgings by churchmen in purple silk vestments and priests bearing cross, candles and thuribles of smoking incense, the king was conducted to the abbey along the streets carpeted with finest linen cloth and resounding to the ‘most glorious singing.’

“…….And there they received the aforementioned Richard who was to be crowned and led him into the church of Westminster in this manner up to the alter with a solemn procession and hymnody. In front went the clerics dressed in white, carrying the holy water and the cross and the candles and the thuribles, next came the abbots, then the bishops. In the middle of those men, however, went four barons carrying candelabra with candles.

And after them came three earls, namely David, the brother of the king of Scotland, earl of Huntingdon, and Robert earl of Leicester, and between them went John Count of Mortain and earl of Gloucester, Richard’s brother. They were carrying three swords with splendid golden sheaths from the king’s treasure.

And after them came six earls and barons carrying a single board on which were placed the royal accoutrements and clothes. And after them went William de Mandeville, count of Aumale and earl of Essex, carrying the golden crown in his hands. Next came Richard duke of Normandey, count of Poitou. Hugh, bishop of Durham went on his right, and Reginald bishop of Bath went on his left, and a silk coverlet was carried over them. And the entire crowd of earls and barons and knights and others, both clerics and laymen, followed up into the nave of the church, and so through the church up to the alter.


On reaching the high altar, Richard took the coronation oath. Kneeling before a copy of the Gospels and the relics of many saints, he swore that all the days of his life he would observe peace, honour and reverence towards God and the holy church; that he would exercise right justice over all the people committed to his charge. Then Richard was anointed. All his clothes were stripped off except his breeches and his shirt, which was bare to the chest.

“Then they shod him with sandals woven from gold. Then the archbishop put the sceptre in his right hand and the royal rod in his left. Then Baldwin archbishop of Canterbury, pouring holy oil over him (using the beautiful little silver spoon last used at the coronation of Queen Elizabeth II in 1953) on three parts of his body, namely on his head, on his shoulders and on his right arm, with the appointed prayers for this act, anointed him as king.

Then he placed on his head a consecrated linen cloth and the cope over it. Then they dressed him in the royal garments: first a tunic, then a dalmatic. Then the archbishop entrusted to him the sword for constraining those who do wrong to the Church. Then the two earls put on him the splendid golden spurs from the king’s treasure.

Thus clad, Richard was led back to the altar, where the Archbishop adjured him, in the name of Almighty God, not to take the crown unless he genuinely intended to keep the oaths he had sworn. Richard replied that, with God’s help, he intended to observe them all.

“Then he (Richard) took the crown from the altar, and gave it to the archbishop and the archbishop placed it on the head of the king.” (The jewel encrusted crown was so heavy that Richard could keep it on his head only when two earls helped to take the weight.)

“And so the crowned king was led to his throne. Hugh bishop of Durham on his right and Reginald bishop of Bath on his left were leading him, the candles and the aforementioned three swords going before them. Then the Lord’s Mass was begun.” During the service a bat was seen to flitter around the throne, and this was odd because it was the middle of the day. It was looked upon by some to be an evil omen. Richard, however, was not a man to be deterred by portents.

“And when it reached the point of the offertory, the two aforesaid bishops led him to the offering, and then led him back to his throne. After Mass had been celebrated and everything had been carried out according to the service, the two aforesaid bishops, one on his right and one on his left, led back the crowned king, carrying the sceptre in his right hand and the royal rod in his left. properly advancing from the church to the king’s own dwelling by procession. Then the procession returned into the choir.”

Back in his chamber Richard was allowed to change into lighter clothes and a lighter crown. He then sat down to a coronation banquet, in which the clergy, in order of rank dined at his table, with the laity, earls, barons and knights sitting at different tables. The citizens of Winchester worked in the kitchen and the people of London were kept busy in the cellars. An idea of the scale of this magnificent occasion can be obtained from the fact that at least 1,770 pitchers, 900 cups and 5,050 dishes were brought in for the special occasion .