Neil continues to unearth fascinating information about Walt Disney’s Story of Robin Hood and his Merrie Men (1952). His research has helped me continue to post information about all aspects of the making of our favourite movie and made this blog possible. Below is his latest input:

“I am very excited to have found this selection of photographs from ‘Today’s Cinema’ dated 27 March 1952.

One shows the amount of promotional material which was around then and typified Walt Disney's publicity campaign which was vast for this film and that is one thing that singles it out for me - even at a very young age.

Also the other shows the queues waiting to see the film in the West End - you will read the caption that sums it up better than I can.

The crowds impressed me as did the large poster outside the cinema - one we know well. This was the second week for the film but still the crowds were as shown.

One interesting note - the film Quo Vadis had been released some time earlier than this and seemed to do record business all over the UK wherever it went. Peter Ellenshaw worked on that one I think.

But these were very good, beautifully made films in glorious Technicolor and on a scale that was not often seen at that time. Another that springs to mind a little earlier was King Solomon’s Mines with Stewart Granger and that brought the crowds out. These have one thing in common though - they were all very good films and still are if viewed now.” 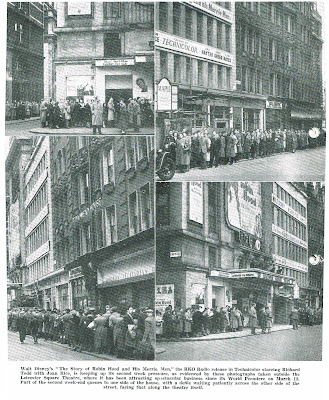 The caption reads: ‘Walt Disney’s Story of Robin Hood and his Merrie Men, the RKO release in Technicolor starring Richard Todd with Joan Rice, is keeping up its second week pressure, as evidenced by these photographs taken outside the Leicester Square Theatre, where it has been attracting spectacular business since its World Premiere on March 13. Part of the second week-end queues to one side of the house, with a defile waiting patiently across the other side of the street, facing that along the theatre itself.’ 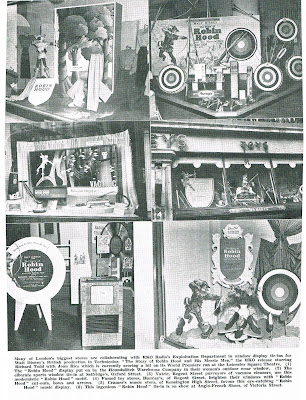 The second caption reads:‘Many of London’s biggest stores are collaborating with RKO Radio’s Exploitation department in window display tie-ins for Walt Disney’s British production in Technicolor, The Story of Robin Hood and his Merrie Men, the RKO release with Richard Todd and Joan Rice, which is currently scoring a hit on its World Premiere run at the Leicester Square Theatre.


1.     The ‘Robin Hood’ display put on by the Houndstitch Warehouse Company in their women’s outdoor wear window.


6.     This ingenious ‘Robin Hood tie-in’ is on show at Anglo-French Shoes, of Victoria Street.'

We have often discussed on this site how much advertising and promotional material Disney used before the release of Robin Hood. But this evidence suggests the memorabilia was greater than expected. I wonder how much of these ‘Robin Hood tie-ins’ survive? We have had a few items in the memorabilia section, but if anybody out there knows of more, please get in touch.
As we can see in the pictures of the huge queue outside the Leicester Square Theatre, Disney’s live-action movie Robin Hood was a big success. But what eludes us is the amount this Technicolor masterpiece made at the box-office. Does someone know where we could find this information? If so, please get in touch. 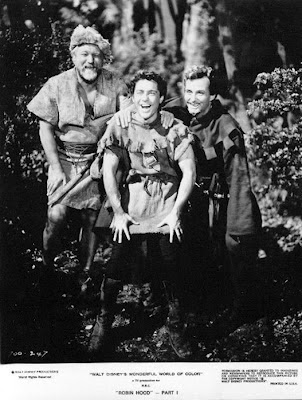 And then he died, smiling. And next day, they did as they had promised; they buried Robin Hood ....... on top of his wardrobe!
3 comments: 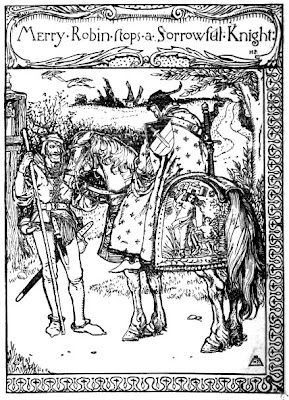 Albie’s input on this site regarding the history of Nottinghamshire and in particular Sherwood Forest has been invaluable.  One of the many interesting topics he has raised is the ancient history of the Nottinghamshire village of Wellow. A while ago Albie sent in some great pictures of the May Day celebrations around its unique, permanent maypole by the village children. The tradition still remains to this day that whenever a new pole is needed, it is cut from nearby Sherwood Forest.
And it is the links with Sherwood and the legend of Robin Hood that make the ancient village of Wellow fascinating. In particular is the knight who owned the castle near the village. Today it is known as Jordan Castle, but Wellow Castle, as it was once known, was owned by a local Nottinghamshire knight called Sir Richard Foliot whose conduct had remarkable similarities with Sir Richard at the Lee in one of the oldest ballads of Robin Hood.

In the Geste of Robyn Hode (1495), the knight protects the outlaws in his:
‘....fayre castell
A little within the wood,
Double ditched it was about,
And walled by the road.’

Jordan Castle, as it is known locally, was the inheritance of a Yorkshire knight known as Jordan Foliot who had served in the armies of King John. It came to him in 1225 and later was often visited by Henry III and his retinue when travelling north. Because of his hospitality to the monarch, Jordan was rewarded with deer to stock his park at his nearby lands at Grimstone. After Jordan’s death in 1236 his young son Richard Foliot (d.1299) was allowed to immediately inherit his father’s lands in Yorkshire and Nottinghamshire, followed in 1252 with a charter of free warren. This gave him the right to control the hunting of the beasts on his estates. In 1268 King Henry III granted Foliot permission to hold a market and fair near his castle at Wellow.

Foliot’s castle did match the description in the Geste of Robyn Hode very closely. It was a ringwork castle of the late 11th and 12th century and included a ditch, a wall of stone and lime, and a moat. It stood on high ground just outside the boundary of Sherwood and was probably the manorial centre of the nearby village of Grimstone. In March 1264 Foliot was given licence by the king to fortify and crenellate it.

In the Geste Robin is betrayed by the Sheriff of Nottingham after an archery contest. A hue and cry is raised and eventually Little John is wounded in the knee.  They take refuge in the castle of Sir Richard at the Lee, who welcomes them - the castle gates are shut and they feast in safety. But eventually the castle is put under siege by the sheriff.

It appears that Richard Foliot also had connections with outlaws, in particular the notorious Roger Godberd and his partner in crime Walter Devyas. Godberd, a former member of the garrison at Nottingham Castle led a large outlaw band that had poached in Sherwood, murdered and robbed throughout Nottinghamshire between 1266 and 1272.  He is often put forward by scholars as a possible prototype of Robin Hood. 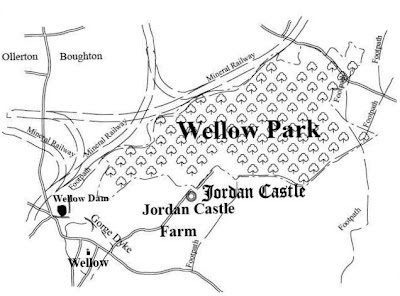 The Sheriff of Nottingham, Reginald de Grey was given £100 by the Royal Council to capture Godberd, which he did ‘manfully’. In October 1271 Foliot was given power of safe conduct and ordered to ‘conduct Walter Deyvas charged with divers trespasses to the king.’

But Richard Foliot refused to do so and was shortly afterwards accused of harbouring both Godberd and Devyas and other wrongdoers. The Sheriff of Yorkshire seized his lands and as he advanced on Fenwick, Foliot surrendered both the castle and his son Edmund as sureties that he would present himself as a prisoner at York on an agreed day. It seems that Godberd, Devyas and the other outlaws, like Robin and his men, must have slipped away.

When Foliot appeared before the king at Westminster, he was able to give the names of twelve barons as guarantors for his behaviour. With that he appeared in the Court of the King’s Bench on the 13th October and the king instructed the sheriff to return his lands to him. 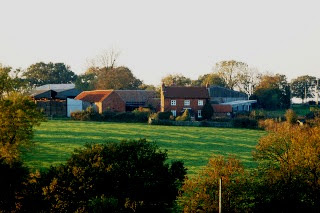 Jordan Farm near the site of the castle.

Trying to identify  the ballad heroes and events in the Robin Hood legend is impossible. But there are some interesting parallels here between the historical evidence and the Geste of Robyn Hode. What is also intriguing is the location of the Foliot lands, first pointed out by Professor J. C. Holt in his ‘Robin Hood’.  Apart from his properties on the eastern side of Sherwood at Wellow and Grimston, Sir Richard Foliot also held lands near another area with strong connections to the Robin Hood legend - Wentbridge. These places were in the valley of the Went at Norton, Stubbs and Fenwick. Barnsdale, Robin’s other traditional haunt; lay just five miles from Fenwick.  This link between the Foliot lands near Sherwood and Barnsdale could explain how the legend was transmitted between his various households and the locations of the ballad hero were conflated. Holt put it rather romantically when he described how Sir Richard Foliot, ‘from his castle at Fenwick, on a spring evening, would see the sun go down over Barnsdale, no more than five miles away.’


I am not sure what year this advertisement appeared and when the Story of Robin Hood accompanied Scandalous John. In fact I had never heard of  Disney’s Scandalous John!
So if any of my blog readers can help, it will be greatly appreciated.