The Birth of English 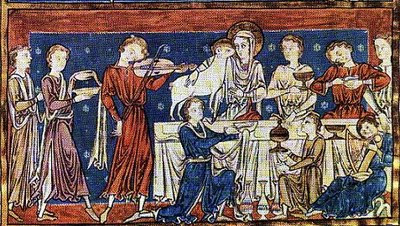 After having such a good response recently with my post on the medieval town of Nottingham, I have decided to continue with a similar theme. But this time it is inspired by a fantastic series called ‘The Norman’s’ by Professor Robert Bartlett. In my post last week we saw how the town of Nottingham was originally divided into two boroughs, one Saxon and one Norman. Each grew up alongside each other and eventually developed into the city we know today. This reflects how the English language first evolved, from its Saxon and Norman roots, to become one of the most influential languages in the world.

The Norman Conquest in 1066 brought a small mainly male group to power in England, a ruling elite of perhaps no more than 10,000 men. Intermarriage was common and the children of these Anglo-Norman marriages spoke ‘English’ because their mothers or wet-nurses were ‘English’ and the French and English languages are still playing out that dance that they began in 1066.

In the three centuries that followed the Conquest, thousands of French words entered the English language. First they were the words of power, politics and law (empire, govern, authority). But soon the language reflected Norman influence in every aspect of life.

Some of the new words were very important like, ‘war’, ‘peace’, ‘justice’ and ‘court’ and the reason the modern English language has so many different words for the same thing, is that the Normans introduced French alternatives. So ‘Royal’ derived from the French-‘kingly’ or ‘queenly’ from the ‘old English’ and the same with ‘country’ (French), land (English), ‘amorous’ (French), loving (English).

One of the things that make Anglo Saxon history seem strange or distant to us is the unfamiliarity of the names........ the Ethelbert’s’ and Egbert’s’. The Norman names, William, Henry, Richard and Robert caught on amongst the conquered and endure to this day. The ruling elite set the fashion; soon William was the most common male name in England even amongst the peasantry. Surnames that begin with ‘Fitz’ go back to the Norman practice of using ‘Fils’, meaning ‘son of’ as part of the name, giving us ‘Fitzsimons’ as ‘son of Simon’ or ‘Fitzgerald’, ‘son of Gerald.’

The languages were blending together, but French remained the tongue of the ruling class and nowhere are the class divisions clearer than with meat and drink. ‘Pig ’is English, ‘pork’ is French, ‘sheep’ is English, ‘mutton’ is French. So when it’s in a cold field covered in dung, its name is in English. When it has been cooked, carved and put on the table with a glass of wine, its referred to in French!

The association with ‘Frenchness’ with the English upper classes and the Saxon with the coarseness and vulgarity is one of the Norman’s enduring legacies. But over the decades the cultural distinction between Norman and Saxon gradually evolved and prospered to become one of the most influential languages in the world.

About a hundred years after the Battle of Hastings, the king’s treasurer Richard Fitz Neal wrote that ‘with the Normans and English living side by side and intermarrying the peoples have become so mingled that nowadays it is impossible to tell who is of Norman descent.’ And French the ‘language of power’ of the Norman’s, was by the 1500’s just a foreign tongue to be learned at school.

Email ThisBlogThis!Share to TwitterShare to FacebookShare to Pinterest
Labels: Nottingham

"The Birth of English"

Interesting observation about the delicacy of using French words for meat that is being served. I wonder why it didn't work the same way for poultry and fish??

I have heard it said that it is the adaptability of modern English - stemming from the tradition of blending - that has enabled it to become one of the world's dominant languages.

Still, it's a shame that the beautiful, melodious Anglo-Saxon language was corrupted beyond recognition. The Normans have a lot to answer for! ;-)

Hi Trish,
I believe 'Poultry' is a French word and Hen and Chicken are Saxon so in that case it sort of works.

Another interesting one is the Saxon 'Deor' 'Deer........the Norman was 'Venesoun' Venison. So once again out in the forest and then cooked!

I agree, it is the flexability and versatility of what became the English language, that enabled our great poets and writers such a wide spectrum of words to work with.

Thanks for your interesting comments, look forward to hearing from you soon.

There are still a lot of original Saxon words in use today. One, associated with the north east of England we use around here is 'gan' or 'ganning' Altough these areas dialects are associated with Norse words gan means 'go' in Saxon. From what I can deduce 'Auld lang Syne' are Saxon in origin (I may be wrong though). One of the oldest is 'turd' which marries neatly with your Saxon 'coarseness' Clement... ;o)

For anyone interested in the old tongue there are a couple of interesting publications. Sweet's Anglo Saxon Primer is the starting point for scholars wanting to learn Saxon. It has been since the 1880's the de facto book to the basics of Saxon (I have a copy which is useful for certain research articles).

The other is Bosworth Toller which is basically a saxon dictionary. It dates from the 1830's but like Sweets has been updated regularly. You can find online versions of it though I think you have to buy Sweets which is available from Amazon and other book sellers.

All right you two... I know you’re right about Saxon ‘coarseness’ but let’s have some balance here ;-)

And to keep this relevant to the blog: maiden, outlaw, thief, bow, arrow, wood... the Saxons knew Sherwood as a “wood”. It was the Normans who turned it into a “forest” (an Old French word) with all its laws and restrictions.

Thanks, Albie. I have Sweet's, but didn’t know about Bosworth Toller. I’ll be looking that up!