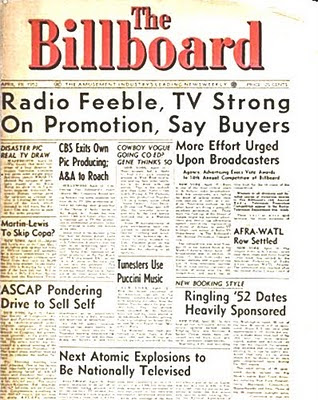 The following text is taken from The Billboard on April 19th 1952 at the start of Walt Disney's promotion of his second live-action movie which was released as The Story of Robin Hood (RKO RadioPictures) in New York on 26th June 1952 (although the article puts in in July of that year). I hope you will find it interesting:

"Capital Records have obtained the album rights involving the original cast of the forthcoming Walt Disney flick Robin Hood. Capital has become increasingly active in all phases of the album market. The company recently secured the rights to original cast recordings of the musical, Three Wishes for Jamie and Of Thee I Sing and is now riding high with the Jane Froman set, With a Song in My Heart.

Capitol intends to go all out promotion-wise with the Robin Hood album. It will be a two set record set, with an illustrated story included. In addition to the usual window displays and streamers to hype sales, the company is mulling the idea of Robin Hood archery contests, with archery sets as prizes for kids. For radio publicity, Capitol intends to make disc jockey interview records with the star of the flick, Elton Hayes, and will arrange personal appearances of the actor. A large newspaper and magazine advertising campaign is also skedded.

Simon and Schuster has latched on to the rights to release 25-cent discs of the Disney Robin Hood flick, for Little Golden Records, as well as the right to release one 10 inch platter for the Big Golden Records line.

The movie is set to open in theatres in July. Both Capitol and Simon and Schuster expect to have their waxings ready for release in July."

Email ThisBlogThis!Share to TwitterShare to FacebookShare to Pinterest
Labels: Behind The Camera, Elton Hayes, Memorabilia

It just goes to show how much publicity went into the release of this film. I dont remember the release of the records and this does refer more to the USA.
Elton Hayes was a big force in the promotion and we did know of his extensive tour of appearances. Dont remember Richard Todd doing that much nor Joan Rice.
Elton at that time was on TV very regularly and it is a name most of us of a certain age would know well - although mainly for this film of course

My name is Jules and I am from Stirling. I have the other day discovered this forum and I like it alot.
I am a bit shy so I wont talk much about me but maybe when I will get more confortable, you guys will get to know me better!
My main hobbies are playing piano and watching movies. I also like outdoor activites but the temperature has been horrible for the last days or so here |.

I was wondering if someone else here is from the united Kingdom too?

I am glad to have joined this forum!
Cheers!
:)

PS: I apologize if this was posted in the wrong topic. I could not find the good one!

My name is Harry and I am from Stirling. I have recently discovered this forum and I like it very much.
I am a little bit shy so I wont write much about me but maybe when I will get confortable, you will get to know me better!
My main hobbies are playing piano and watching movies. I also love outdoor activites but the temperature has been bad for the last days or so here in Stirling in the city|.

I was wondering if someone else here is from the united Kingdom too?

I am happy to have joined this forum!
Cheers!
:)

PS: I apologize if this was posted in the wrong topic. I could not find the good one!