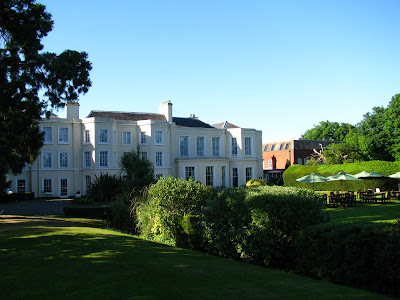 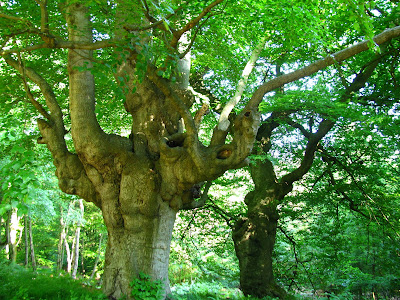 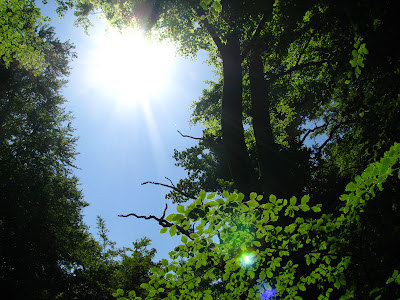 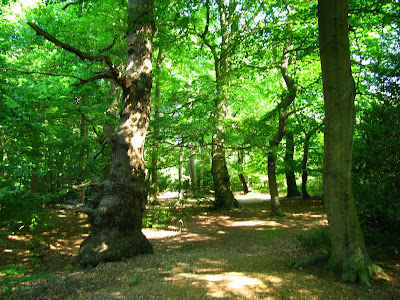 My wife and I have just got back from a fantastic week-end at Burnham Beeches Hotel in Buckinghamshire, where we have visited a couple of the locations used for filming Walt Disney’s Story of Robin Hood in 1951. The weather could not have been any better and I thoroughly recommend the Burnham Beeches Hotel, which was fabulous. The web site for the hotel is here: http://www.corushotels.co.uk/burnham/index.php
As we approached the outskirts of the forest early on the Sunday morning, after a hearty breakfast, we noticed many mobile homes and caravans parked in a field near-by, with signs marked WB everywhere. Later when I asked an elderly couple how to get to Middle Pond and Mendelssohn's Slope; they informed us that Warner Brothers were filming the latest Harry Potter movie at Mendelssohn’s Slope and some of it was sectioned off!
It didn’t bother us at all, there was plenty to see and the forest was beautiful. We walked along what is known as Lord Mayor’s Walk to Middle Pond where Joan Rice and Richard Todd walked, accompanied by James Hayter and Elton Hayes singing ‘Whistle My Love’. I have a picture of Joan leaning up against some trees next to this pond and very little seems to have changed in the past 58 years!
It was the hottest day of the year, so when we reached Victoria Cross, the cafe was a welcome sight. But I was keen to move on, to see if I could recognise any more parts of the forest that might have been used as locations by Walt Disney’s film crew. So after refreshments we set off for Mendelssohn’s Slope via Halse Drive and Victoria Drive.
Some of the ancient trees were absolutely stunning; I must have taken nearly a hundred pictures. The forest canopy shielded us from the fierce heat of the sun and the bird’s serenaded us, as we walked along the winding forest paths.
Soon we turned into a track known as Victoria Drive with Mendelssohn’s Slope on our left hand side. I was told, by Jeremy Young, a Keeper at Burnham, that this was a location used by Disney for Robin Hood. The path was far more narrow and the tree canopy far thicker. I wanted to try and find the old ancient tree that Archie Duncan (Red Gill) hid in, when he shot Robin’s father. There are a couple of contenders, including Druids Oak, but I am not sure. There are so many massive gnarled old trees; it is very hard to identify THE TREE in ‘real-life’. A lot of this part of the forest did seem familiar but I intend to re-play the movie tonight to take another look and go through my photographs to compare.
We went back this morning (Monday) for one last look around, trying to imagine Walt Disney with Richard Todd and Joan Rice walking these same paths, all those years ago. Ahead we saw the security men with their walkie-talkies and high-visibility tops keeping the public away from the filming of Harry Potter. In part of that particular area the forest path had been covered in large plastic matting with heavy cables and generators. As we turned up Mendelssohn’s Slope I peered through the trees and caught a sight of some of the film crew busily moving equipment around. We eventually reached the top, but as we sadly left the shade of the forest canopy for the last time, I was sure I heard the faint shrill of a whistling arrow flying through the air!

We just saw the movie last night ... and it is a wonderful version of the Robin Hood story. Everyone enjoyed it immensely.

When you mention that "James Robertson Justice" was the one who shot Robin's father, we were under the impression that it was Red Giles who shot him, and that he was played by Archie Duncan from the b&w Robin Hood TV series (i.e. Little John).

Anyway, you might be able to clear that up for us.

Thanks for sharing your photos of the forest. Amazing!

Woops! Yes you are right Robert, it was of course Archie Duncan.
(It was a long drive home yesterday!!)

I am pleased your family enjoyed the movie. I am sure you will agree when I say that the film is very underrated.

I will share some more pictures of Burnham Beeches soon. Many thanks for getting in touch.

Well done Clement, lovely pics, that big tree dose look very much the THE TREE , i know they filmed from a low angle and the assasin fell to the ground only a few feet, allowing for growth over the years i think its a good contender.
What great weather to have for forest shots , dappled sunlight is magical, i must treat my wife to this trip. and that whistling arrow , me perhaps?.

Nice image, that last one. Do you mind if I use it on the Burnham Beeches Half Marathon facebook page?