Tales Of The Riverbank 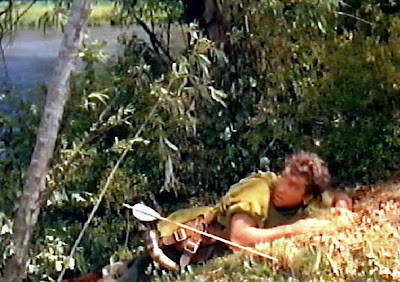 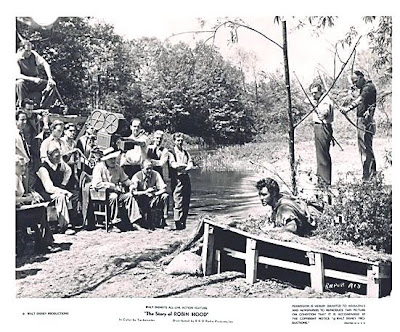 Neil has recently sent me another fascinating picture from the making of Walt Disney’s live-action film The Story of Robin Hood. This time an official still, showing the filming of the scene in which Robin Hood (Richard Todd) climbes up the riverbank to escape from the Sheriff and his men. Two arrows then thud dangerously into the ground around him (above).
As we can see (below) the arrows were actualy fired by two expert archers (James Hemmings and George Brown) brought in by the Second Unit Director, Alex Bryce; who can be seen sitting just below the camera.
For those few seconds of film, a ‘riverbank,’ was constructed out of wood and covered in artificial greenery, alongside the River Colne in the grounds of Denham Studios. Sitting in the chair, wearing the hat, overseeing it all, can be seen the producer of the movie, Perce Pearce.
Thanks Neil!

Must admit to being very excited when I acquired the wonderful 'Behind the Scenes' shot of this sequence and I had to share it on this blog. Very good to show the camera and crew and the set up and then the actual colour scene it produced which when cut into the film is very impressive. It is so surprising to see the very old-fashiond look of the huge Techicolor camera and then see the wonderful bright colour scene that it actually shot which remains impressive by today's standards. Although it must be said the present day film of this nature utterly fails to capture the colour, romance and story book magic of a film of this quality and class.

Neil,
I was wondering if those two archers were involved in Richard Todd getting hit by a barbed arrow during the later filming of his swim across the castle moat?

I think it would be an accurate assumption that either or both of these bowmen were used in the sequence where Richard Todd got hit in the moat and was lucky to remain reasonably alright. I was not aware that it was Perce Pearce seated in front of the camera and this is not mentioned in the detail on the rear of the photograph though I think you are probably right. These Behind the Scenes shots really fascinate me. I wish I had been there !!!