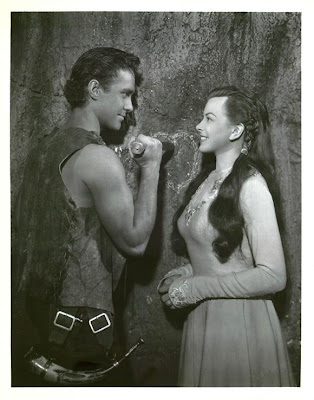 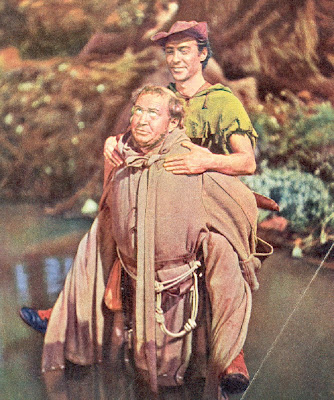 Thoroughly surprised, Robin had no choice but to obey.

The portly friar clambered onto Robin’s back and he staggered across the stream. Then as they almost reached the shore, Robin swung his hands up and grabbed the friar by the back of the neck, sending him flying over his head. Before Friar Tuck could pull himself together, Robin said, “Now Jack Priest, the game has turned my way.”

So once again Friar Tuck waded through the water with the outlaw on his back. But the fingers of the hermit were busy unfastening the cord at the neck of his cloak. Suddenly he pulled the string of his brown habit and the cloak together with the outlaw slid off his stout shoulders.

By the time Robin had disentangled himself, the friar had picked up his sword and they were soon testing each others skills.

But suddenly a force of mounted men appeared riding upstream. It was the Sheriff of Nottingham and his men.

“Take him alive!” Called De Lacy brandishing his sword.
“You shall not interfere,” shouted Friar Tuck, “Until I have finished with him!”
“Throw this prating priest in the stream,” said the Sheriff curtly to his forester.
“Come lad,” called the friar to Robin, “Back to back.”

De Lacy waited on his horse for an opening, as the foresters swarmed around Robin and the priest. Then the Sheriff rode in close and with the flat of his sword, struck Friar Tuck to the ground.
Robin quickly felled one opponent but De Lacy managed to knock the outlaws weapon from his hand. Robin dashed to a tree where he came face to face with a forester, sword in hand. He reached up, grabbed an overhanging branch and swung towards the forester and kicked him flat.
The Sheriff pulled his horse around and charged at the outlaw, still hanging from the tree. At the right moment, Robin let himself go and knocked the Sheriff clean off the horse’s back. Robin seized the reins and turned the animal towards the far fork of the river.
“Bring him down!” Shouted the fuming Sheriff.

[To return to previous chapters, click on Story in the righthand column]. 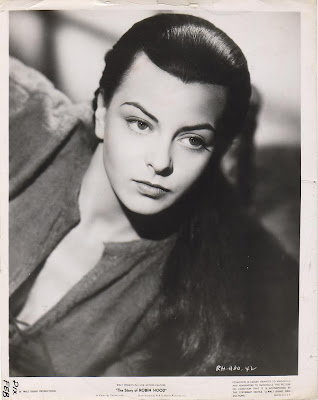 Robin Hood and the Green Goddess 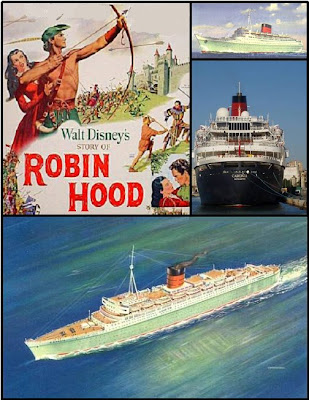 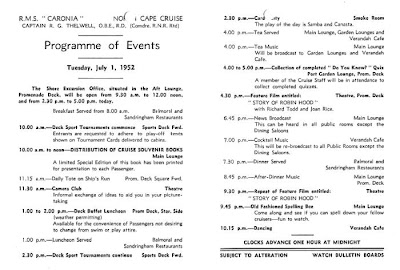 Robin Hood at sea? Well almost. Above is a timetable from the RMS Caronia dated July 1 1952 during her North Cape Cruise. The list of events shows that at 4.30 pm and at 9.30 pm on that day, Walt Disney’s Story of Robin Hood was to be shown in the ship’s theatre on the prom deck.

The RMS Caronia was the post war pride of the British Merchant Navy and the first all first-class ship launched by Cunard after WW2. She was also the first vessel owned by Cunard White Star to have an outside swimming pool and air conditioning in every public room. These cruises for the rich soon earned her the nickname ‘The Millionaires Yacht’.

Launched on the 30th October 1947 in the presence of Princess Elizabeth, shortly before her marriage to Prince Philip, Caronia's first maiden voyage from Southampton to New York took place in January 1949.

During her annual refitting at Liverpool Docks in December 1952, the Caronia caught fire. The local fire brigade soon managed to quickly get things under control and she was repaired and ready in 1953 to bring American visitors across the Atlantic to see the Coronation of Queen Elizabeth II at Westminster Abbey in London.

Purpose built for transatlantic crossings, with her art deco interiors, open air lido and her attention to luxurious detail, the ‘green goddess’, as Caronia became known, due to her four shades of green, is remembered today with great affection.

Hmm! Green? Wasn't that Robin Hood’s favourite colour?
© Clement of the Glen 2006-2007
No comments: Links to this post 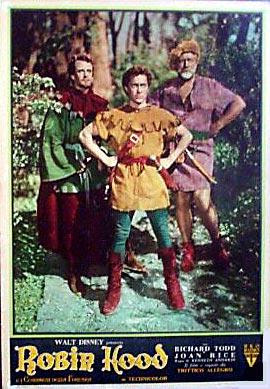 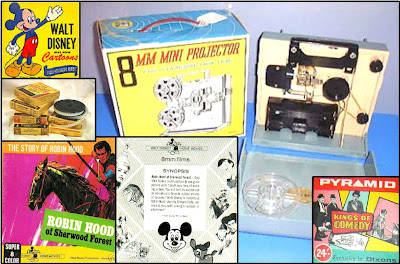 Before the days of video and dvd, the only chance of seeing your favourite film again, other than waiting hopefully for a second release at the local cinema, or a rare showing on television, was to see it as a home movie. This would mean purchasing a film projector and screen and showing an edited version of your chosen movie in a darkened room, to friends and family. Initially, this could be a very expensive form of home entertainment, but in the past it was the only way to re-live the magic of your favourite film.

Home movies date back to those far off pioneering days of the motion picture industry during the nineteenth century. But as the years passed, it soon became apparent that most families found it far cheaper to hire or buy commercially made films, rather than make their own. So although amateur film making continued, local film libraries were created. It was Eastman Kodak who introduced the first standard film gauge in 1923. This was the 16mm size that is still used today, but in an attempt to bring down the cost of film during the American Depression, the Standard 8 film was developed by Kodak in 1932. This was 25 feet of 16mm film that ran through the cine camera twice and was exposed on alternate sides. During its processing, the laboratory would then split the film lengthwise down the centre, then splice one end to another, forming 50 feet of 8mm film allowing approximately 3 minutes of film time.

It was as early as 1932 that Walt Disney licensed Hollywood Film Enterprises to produce 16mm and 8mm shortened versions of his very popular cartoon films and in December 1934 Bell and Howell produced their first 8mm film projectors. In the same year, Disney began selling 25ft. (one minute) 16mm films for hand cranked toy projectors for children. But by the early 1940’s Disney had switched to the now popular 8mm size and continued to release various titles up until 1950.

So in the 1950’s middle class families were able to record memorable moments in their lives on celluloid or watch shortened versions of some of their favourite classic movies, ordered specially through glossy catalogues, in the comfort of their own home.

Often these home movies were silent and in black and white. This made versions of the early slapstick comedies of Charlie Chaplin, Buster Keaton and Laurel and Hardy very popular. But major companies like Universal Pictures soon allowed manufacturers like Castle Films to release in two versions, a 50ft. Reel (3-4 minutes) or 200ft. Reel (12-16 minutes) excerpts of popular cartoons like Woody Woodpecker or the classic horror features like Dracula, Frankenstein and The Werewolf. During the early sixties it was Abbot and Costello that became Castle Films top-selling home movie stars. Meanwhile, in the 1960’s Walt Disney Home Movies were releasing favourite excerpts from some of its classics like Snow White, Bambi and Peter Pan. This meant there was no longer the need to wait the seven years for the next re-issue of the Disney feature length films at the local cinemas, which was the policy of the studio at that time.

In April 1965 Kodak introduced Super 8 film for home movies. This gave an improved quality of image which not only became extremely popular with amateur film makers, but helped boost the home movie industry as they continued to package condensed one reel versions of major feature films. By the mid sixties the introduction of sound home movie projectors prompted more 200ft and 400ft reel versions with magnetic audio tracks.

As a youngster I had always been fascinated by the cinema and can remember vividly my first toy Standard 8 film projector that I was given one Christmas in the late 1960’s. With the projector came a couple of Laurel and Hardy silent 50ft films (Let ‘Em Rip and Grave Heroes). Those little films were quite expensive and if my memory is correct, they used to cost about nineteen shillings and sixpence!

But after excitedly unpacking my new toy and giving a couple of showings to my younger brother, the plastic handle broke off halfway through a film premier for my parents, leaving me unable to crank the film. That was it! I burst into tears! My poor Dad tried desperately to glue it back on, but alas it took a fortnight before he managed to get the projector replaced. I was heartbroken.

Many years later, I saved up and bought a far more sturdy, electric projector from a local camera shop in my home town. It was when the shop assistant asked me if would like to chose any movies to go with it, that I noticed sitting on the shelf a 50 ft colour version of Disney’s Robin Hood of Sherwood Forest by Walt Disney Home Movies. A silent excerpt from the original movie The Story of Robin Hood released in 1952. I couldn’t believe my luck. My bus home that Saturday could not go fast enough! 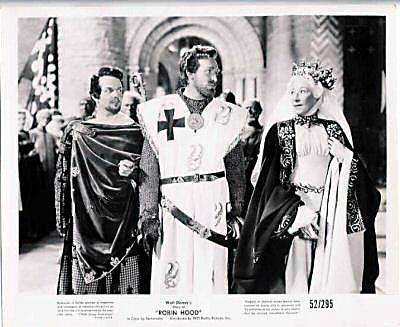 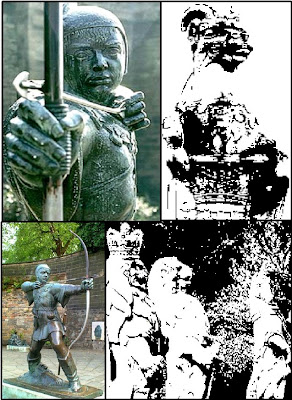 Four months after the Royal Premier of the film The Story of Robin Hood and his Merrie Men in London, further up north in Nottingham, they unveiled a statue to their world famous outlaw, by the castle walls, in the presence of the Duchess of Portland.

The ceremony took place on July 24th 1952 on Castle Green, in a specially landscaped area at the foot of Castle Rock, in the remains of the old moat, by local architect Cecil Howitt. The seven foot statue, including four bas-relief plaques were a gift to the city, by local businessman Philip E. Clay and was designed and cast out of half a ton of bronze, one inch thick, by Royal Acadamician, James Woodford (1893-1976) in his studio at Hampstead. Woodford was the son of a Lace designer and was born in Nottingham. He attended the Nottingham School of Art and after military service during the First World War he trained at the Royal College of Art in London.

A year after his statue of Robin Hood was unveiled at Nottingham Castle, James Woodford RA was commissioned to carve a set of ten heraldic figures out of Portland Stone, to be placed at the entrance of Westminster Abbey for the coronation of Her Majesty Queen Elizabeth II. These heraldic beasts were selected from the armorial bearings of her royal ancestors and can be seen today along the walkway between Palm House and the pond at Kew Gardens. 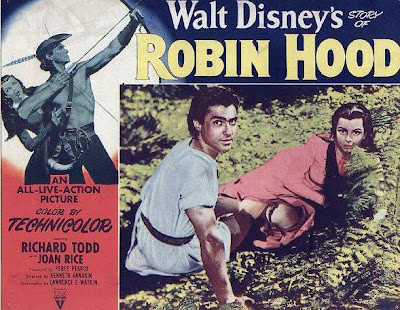