Robert has recently sent me this photograph of a pollarded tree in Burnam Beeches and wonders:

Could this be the tree that Red Gill (Archie Duncan) was killed by Robin. It looks low enough. I will have to watch the film?

Burnham Beeches in Buckinghamshire, England, has been used for literally hundreds of movies and TV shows and there is a list of them on this website. It is a truly beautiful place and well-worth a visit.
Back in 2014 I visited and spent the day trying to locate many of the locations used in Walt Disney's Story of Robin Hood. 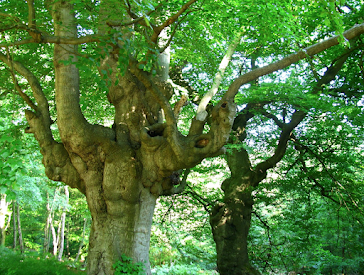 Burnham Beeches was the location chosen by Walt Disney to be his Sherwood Forest, not only because of its close proximity to Denham Studios (12 miles approx.), where two of the huge sound stages were used, but also because of its amazing ancient woodland that was ideal as a backdrop to this classic tale. I have noticed a number of film web sites state that Disney’s live-action movie was the only Robin Hood tale to be filmed in Sherwood Forest. This in incorrect, but shows what a good choice Burnham Beeches was.
Disney's second unit filmed many scenes in an area of Burnham Beeches known as Mendelssohn’s Slope which is filled with ancient pollarded trees. Also at Middle Pond, where Robin (Richard Todd) and Marian (Joan Rice) took their romantic evening stroll, accompanied by Friar Tuck (James Hayter) and Allan a Dale (Elton Hayes) singing ‘Whistle My Love.’
I didn't discover the huge pollarded tree that was used for filming, there is so many in the 540 acres! But a close look at some of the stills in Laurence's fantastic picture strip shows that the tree used 70 years ago was much older than Robert's candidate. But many thanks to Robert for sending it in. 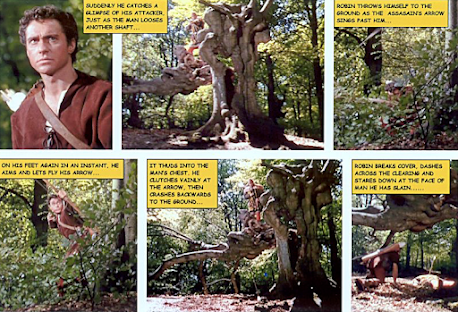 Many thanks to Robert for the photo.