The Bird That Woke Robin Hood


Since moving to the beautiful county of Gloucester I have been astonished by the amount of birds that regularly visit our garden.  My fiancee and her mother are attempting to teach me the various species and their calls. So with my interest in the Robin Hood legend, I decided to ask them if they knew of a bird called a Woodweete. I was greeted by puzzled looks. So I explained to them that it was this bird that woke Robin Hood from a dream in the ballad Robin Hood and Guy of Gisborne. They had never heard of such a bird, so I decided to spend some time investigating this mysterious creature.

First some information about the ancient ballad. It was Thomas Percy, Bishop of Dromore in Ulster, (1729-1811) who ensured the survival of the original manuscript of Robin Hood and Guy of Gisborne and it was published for the first time in his Reliques of Ancient English Poetry (1765). Percy's collection (including eight Robin Hood ballads) later became known as the Percy Folio.

David Fowler in his Literary History of the Popular Ballad (1968) described the Percy Folio as:


the most important single document relative to the history of balladry

Percy explained how, when visiting the home of Humphrey Pitt in 1753, he saw the collection of manuscripts 'unbound and torn, lying on a dirty floor' being used by parlour maids to light the fire! He was already interested in old poetry and rescued the remains of the folio. On closer inspection he discovered that it contained ballads, historical songs, metrical romances and sonnets dating from between the fourteenth and seventeenth centuries.

It had not been treated well, probably because the owners would have found the Middle English and Border dialect used in the manuscript incomprehensible. Many of the pages, Percy explains, were badly 'mutilated and imperfect.'

The publication of Percy's Reliques of Ancient English Poetry not only revived scholarly interest in ballad poetry but inspired people like Robert Burns, William Wordsworth, William Blake, Samuel Taylor Coleridge, the brothers Grimm and the whole 'Romantic Movement'. Sir Walter Scott recalled that at the age of thirteen he forgot his dinner because he was so enthralled by his first perusal of the Reliques.

The ballad Robin Hood and Guy of Gisborne, saved by Percy, only survives in this portfolio. It is written continuously in an early seventeenth-century hand (with possible omissions) but Percy discovered that 'it was a ballad of Robin Hood which had never before been printed and carried marks of much greater antiquity than any of the common popular songs on this subject.'

Even more damage was done to the manuscripts when Percy had the collection bound together. The bookbinder trimmed off the edges of the pages, losing some of the first and last lines. Not only this, but being compliant with the age he deemed it important to 'correct' and edit the ballads he published, sometimes even re-writing, conflating and softening the text for his eighteenth century readers. This is something he would later be criticized for by scholars. One of the alterations he made was the name of the bird that awoke Robin Hood from his dream in the forest. The original seventeenth century manuscript has:


The woodweele sang and wold not cease

Percy does not hesitate in altering woodweele to woodweete (as seen in the image at the top of this post) and describes the bird as:

a Golden Ouzle, a kind of Thrush.

But when John Hales and Frederick Furnivall edited the Reliques in 1868 they suggested Percy's 'woodweete' as :


a Witwall, the Great Spotted Woodpecker

Later, the great American ballad collector Francis J Child in his English and Scottish Ballads (5 vols. 1882-98) printed the ballad with woodweele but in his glossary has woodweete.

Confused? It doesn't get any easier! The Romaunt of the Rose, a French allegory partially translated by Chaucer, seems to refer to the same mysterious bird :

Can we assume that this poem in Middle English is referring to the same bird? If we do than what do the Chaucerian experts think the bird was?

John Urry in The Works of Geoffrey Chaucer (1721) explains in his glossary that wodwale is 'witwall' known as the golden ousel a bird of the thrush-kind.

North of the border, John Jamieson in his Etmological Dictionary Of The Scottish Language (1818) has:

Arthur Quiller-Couch (1863-1944) in his Oxford Book of Ballads (1927) describes the 'woodweele' in the ballad of Robin Hood and Guy of Gisborne as:


In modern times there has been a surge in research into the legend of Robin Hood. In 1976 R. B. Dobson and J. Taylor reproduced a collection of  thirteen ballads with accompanying notes known as the Rymes of Robyn Hood. In their glossary of the ballad Robin Hood and Guy of Gisborne  (p.141) they explain that 'woodweete: woodwall, is usually identified with the golden oriole, noted for its singing voice.'

Other current experts on the legend like Professors Stephen Knight and Thomas Ohlgren go with woodwall (golden oriole).

I decided to consult the RSPB site on the golden oriole and was frustrated to see that this beautiful singing bird only colonizes on the south or east coasts of England in the summer. Nowhere near Sherwood Forest or Yorkshire's Barnsdale, where the ballad is set. Whereas the green woodpecker, like the song thrush, is a resident across all of England's ancient woodland.

But what I did not take into consideration was the 'medieval warm period' or the Medieval Climatic Anomaly. This, I learned, ran from about 950 AD to 1250 and would have encouraged the golden oriole's breeding range in north west Europe. The bird is a great wanderer, especially the males in their first two years. So it is possible that during the 13th Century the golden oriole could have visited the forests of central and northern England. 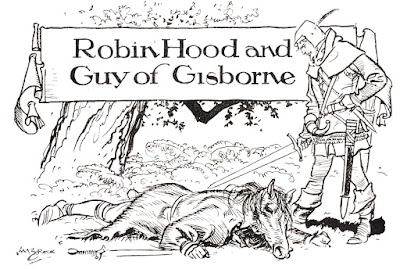 Robin Hood and Guy of Gisborne is (as Percy mentioned) of great antiquity and has many ancient motifs, notably Guy's horse-hide and head, which seem more like ritual costume. Was the 'woodweele' chosen for it's traditional mythical elements or as a metaphor?

It seems - from all this - we have at least three possible candidates for the 'woodweele' in Robin Hood and Guy of Gisborne. These are the song thrush, golden oriole and green woodpecker. Down the centuries, birds like these have established a substantial amount of folk-lore about them.

The golden oriole is known in ancient lore as a 'transfigured magical image of the blackbird.' Like the blackbird, the oriole's flute-like calls make it a piper of the dawn and its cheerful notes have been described as 'merry as its clothing.'

This beautiful, but secretive bird, spends a lot of its time aloft in tree tops. It is known in legend for its healing virtues and when looked upon by a person with jaundice, it cures the sufferer-but sadly dies during the process.

The song thrush, meanwhile, has been described as the 'very spirit of spring' and likes to nest in forests with good undergrowth. The male's distinctive song has musical phrases (sometimes over a hundred), which are repeated two or three times interspersed with grating noises and mimicry (including other birds and man-made objects). The song thrush has a unique voice box, known as a 'syrinx', which enables them to sing two notes at once and blend them beautifully. For its weight the song thrush also has one of the loudest bird calls.

Many famous poets have celebrated the song thrush in verse. Including Robert Browning in his Home Thoughts, from Abroad:


That's the wise thrush, he sings each song twice over

Lest you think he could never recapture


The green woodpecker would also have had a song loud and persistent enough to awaken Robin Hood. The 16th Century antiquarian John Aubrey noted that this particular bird was used for divination. In Norse mythology, the green woodpecker was the bird of Thor, god of thunder and lightning and was able to cure illness and prolong life.

This haunter of forests was described as a 'living barometer' by our ancestors and can become very vociferous when a storm approaches. Did the poet include the woodpecker's 'ceaseless calling' as a warning to Robin of his imminent brutal confrontation with Guy of Gisborne?


Below are three clips of the birdsong of our possible candidates, the green woodpecker, song thrush and golden oriole.


After a great deal of consideration, I believe it was the green woodpecker (with its 'joyous laugh') that woke Robin Hood in the greenwood.

What do you think?

Special thanks to my wonderful partner Jules, for editing this piece for me.

Robin Hood and Guy of Gisborne.

The Bird That Woke Robin Hood

Interesting. This is what the Middle English Dictionary has under "wọ̄de-wāle (n.(1))": "Any of several varieties of bird, esp. the green woodpecker (Picus viridis) and the rarer golden oriole (Oriolus oriolus), with which, in its female and immature forms, the former may readily be confused; ?also, some other songbird, perh. the woodlark (Lullula arborea) or one of the tits or finches, such as the coal tit (Parus ater); also, one of these birds used as food" ( http://quod.lib.umich.edu/cgi/m/mec/med-idx?type=id&id=MED53284 )

Thank you Henry, The dictionary you refer to basically confirms that the 'woodweele' could be any number of birds. Like so many subjects concerning Robin Hood the answer lies way back in the midst of time. You pays your money and takes your chance.

The green woodpecker is still known as woodwall, woodall and woodwale in some dialects of England. The poem 'The Owl and the Nightingale' by John of Guildford (13th century) refers to the green woodpecker as the Wude-wale. I might go so far as to theorise that Robin Hood is an anthropomorhic woodpecker; after all, he wears green and has a robin-red hood.