The Mystery of Robin Hood's Grave 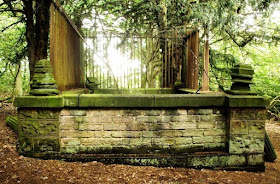 
Along with Sherwood and Barnsdale, it is Kirklees that has one of the strongest links with the Robin Hood legend. It is in the tiny priory that existed in Yorkshire, ballads and legend state that the outlaw was killed and buried.

'I will never eate nor drinke,' Robin Hood said,
'Nor meate will doo me noe good,
Till I have beene att merry Church Lees,
My vaines for to let blood.'

We have looked at the history of Kirklees Priory in previous posts and I have been intending to carry on with an investigation of Robin Hood's Grave for quite some time.What I did discover, as I eventually began to try and piece together the existing facts, was an historical nightmare!

A Joan Kyppes was the last prioress of Kirlees and on the 24th November 1539 she surrendered the priory during the Dissolution at the value of £29.8s. 2d.  It had contained eight nuns.

Shortly after the Dissolution the Armytage family came into the possession of the hall at Kirklees, which was constructed with the stone from the original nunnery.

John Leland (1506-52) Antiquary to Henry VIII had spent six years on a tour of England collecting material for his Collectanea (1540) and in 1534 he visited Kirlees. Not only was Leland the first person to describe the outlaw as a noble, but he also describes seeing:

The monastery of Kirkley where the famous noble outlaw Robin Hood is buried.

"......afterwards troubled with siknesse came to a certain nunry in Yorkshire called Birklies [Kirklees] where desyring to be let blood, he was betrayed and bled to death......The prioress of the said place caused him to be buried by the highwayside, where he had used to rob and spoyle those that passed that way. And Vpon his grave the sayd prioress did lay a very fayre stone, where in the names of Robert Hood, Willaim of Goldsborough and others were graven. And the cause why she buried them there was, for that the common passengers and travailers, knowing and seeing him there buryed, might more safely and without feare take their journeys that way, which they durst not do in the life of the sayd outlawes. And at eyther end of the sayd tombe was erected a crosse of stone, which is to be seene there at this present"

A spot by the roadside adjacent to Kirklees Park on the highway bewteen Mirfield and Clifton-upon-Calder, is known as Dumb Steeple, and it is here that some local people say Robin Hood was buried.

In 1584, a gazetteer mentions, the tomb of Robin Hood at Kirkley, a generous robber and very famous on that account.

The mysterious 'Life of Robin Hood,' an anonymous collection of information, seemingly taken  from extant ballad and plays of about 1600, (known as the Sloan Manuscript) has:

....Being dystemepered with could and age, he had great payne in his lymmes, his blood being corrupted, therefore, to be eased of his payne by letting blood, he repayred to the priores of Kirklesy, which some say was his aunt, a woman very skylful in physique and surgery; who perceyving him to be Robyn Hood and waying how fell an enimy he was to religious persons, toke revenge of him for her owne howse and all others by letting him bleed to death

The tomb is again mentioned by the Westminster School Master and historian William Camden, in his fifth edition of Britannia in 1607 (revised in 1789):

At Kirklees nunnery Robin Hood's tomb with a plain cross on  a flat stone is shown in the cemetery. In the ground at a little distance by two grave stones, one which has the inscription for Elizabeth de Staynton, prioress there.

Grafton describes Robin Hood's grave as being by the road, but Camden places his tomb near to the prioress Elizabeth de Staynton, which was in the priory garden.

Michael Drayton's Poly-Olbion has the lines:

"It chanc'd she in her course on Kirkley cast her eye,
Where merry Robin Hood that honest thief, doth lie."

In 1632 Martin Parker, probably the greatest ballad-monger of them all, produced his True Tale of Robin Hood. Included at the end of his brief touch of the life and death of that renowned outlaw, is the epitaph which the said Prioress of the Monastery of Kirkes Lay in Yorkshire set over Robbin Hood. Which, as is before mentioned, was to be reade within these hundred years, though in olden broken English, much to the same sence and meaning.

Decembris quarto, die 1198: anno regni Richardi Primi 9
Robert Earle of Huntingdon
Lies under this little stone
No archer was like him so good:
His wildnesse named him Robbin Hood.
Full thirteen yeares, and something more
These northerne parts he vexed sore
Such out-lawes as he and his men
May England never Know agen.

Some other superstitious words were in it, which I thought fit to leave out.

We can only wonder what 'superstitious words' they were! 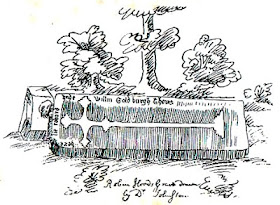 The drawing of a graveslab that seems to be similar to the one described by Grafton in 1562 and Camden in 1607, was drawn by  Dr Nathanial Johnston a physician to the Armytage family in c.1669.

So the inscription was scarce legible when Johnston drew the graveslab.

Between 1697 and 1702 Thomas Gale, Dean of York kept amongst his papers yet another version of the epitaph:

How this  bizarre inscription was devised remains a mystery, but may have been an attempt at archaic English. A Roman Kalend (Calend) ended on the first day of December, as Gale, (who was a classical scholar) must have known. Presumably it was added to the epitaph to lend it an ancient ambiance, but it does seem that Gale's verse  may have been borrowed from Parker's ballad, a True Tale of Robin Hood.

Ralph Thoresby the Leeds historian records in his Ducatus Leodiensis in 1715 that:

...near unto Kirklees monastery the noted Robin Hood lies buried under a grave-stone that yet remains near the park, but the inscription scarce legible.

In a letter to Thoresby a certain Richard Richardson also describes the inscription's decay:

The inscription upon Robin Hood's grave was never legible in my time; and it is now totally defaced; insomuch that neither the language nor character is to be distinguished; only you may perceive it was written about the verge of the stone. I have heard Dr Armitage say, that he could read upon it Hic jacet Robertus Hood, filius secundus Comitis de Huntingdon, but I must own, tho' he was a person of merit, I give little credit to this report.

Thoresby also included, in the appendix of his book, the 'ye olde Englishe' epitaph found in Thomas Gale's papers.

The 'rough sketch by Joseph Ismay

In about 1750 Sir Samuel Armytage the landowner of Kirklees appointed the  vicar of Mirthfield, Reverend Joseph Ismay, a local historian, as a tutor for his children. Ismay was fascinated by the grave of Robin Hood and produced an illustration of the cross that appeared on his tombstone. He admitted it was only a rough sketch but even, so it bared no resemblance to the drawings of Johnston. Ismay's writing on either side of the cross is very hard to understand, but it seems to say:

Sir George Armytage ordered two stone pillars to be erected by Robin Hood's grave in the park with the inscription found amongst the papers of the learned....[section breaks off but it must be Gale].

On the other side  of the cross, Ismay writes the epitaph that appeared in Gale's papers and would later be added to the grave itself. But he also includes:

Ismay explains the reason why the grave site was enclosed:

Ye sepulchral Monument of Robin Hood near Kirklees which has been lately impaled in ye form of a Standing Hearse in order to preserve the stone from the rude hands of the curious traveller who frequently carried off a small fragment of ye stone, and thereby diminished it's pristine beauty.

Thomas Gent's includes a bizarre tale in his List of Religious Houses:

[Robin Hood's] tombstone, having his effigy thereon was ordered not many years ago, by a certain knight, to be placed as a hearth-stone in his great hall. When it was laid over-night, the next morning it was "surprisingly" removed [on or to] one side; and so three times it was laid and as successively turned aside. The knight, thinking he had done wrong to have bought it thither ordered it should be drawn back again; which was performed by a pair of oxen and four horses, when twice the number could scarcely do it before. 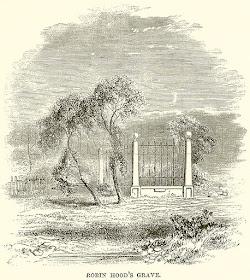 In a rare account of a tour around the grounds of Kirklees, a certain John Watson describes Robin Hood's tomb in 1758:

At some distance from this in an inclos'd plantation is Robin Hood's tomb, as it is call'd; which is nothing but a very rude stone not quite two yards along, & narrow in proportion; it has the figure of a cross, cut in a manner not common upon it; but no inscription, nor does there appear ever to have been any letters upon it, notwithstanding Mr Thoresby has publish'd a pretended one found amongst the papers of Dr Gale Dean of York.

Richard Gough's Sepulchral Monuments of Great Britain (1786) contains a drawing of a plain stone with a cross fleuree said to be from the grave of Robin Hood.


He says:
The figure of the stone over the grave of Robin Hood (in Kirklees Park, being a plain stone with a sort of cross fleuree thereon), now broken and much defaced, the inscription illegible. That printed in Thoresby Ducat. Leod. 576, from Dr Gale's papers, was never on it.

Gough's book also includes the details of a dig at the grave :

The late Sir Samuel Armytage, owner of the premises, caused the ground under to be dug a yard deep, and found it had never been disturbed; so that it was probably brought from some other place, and by vulgur tradition ascribed to Robin Hood.

During the construction of the Lancashire and Yorkshire Railway in the 1830's pieces of Robin Hood's gravestone was chipped off by the navies because they believed it could be a cure for toothache! 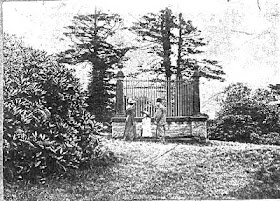 
By the 1840's only a small piece of the gravestone remained, so the owner of the land, Sir George II Armytage, enclosed what was left of the grave with an iron railing. Included was a new gravestone with the inscription taken from Thomas Gales writings. 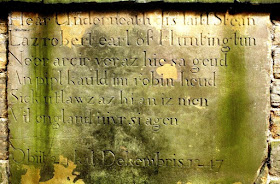 The epitaph built into the wall around the grave.

In conclusion, I would like to use Churchill's quotation, that the site of Robin Hood's Grave is a riddle wrapped in a mystery inside an enigma.


To read more about the history of Kirklees Priory and it's naughty nuns, please click here.