Spring is my favourite time of year and in particular the month of May, when the celebrations begin to welcome the return of warmer weather.

May Day doesn’t appear in the Christian calendar, its origins are steeped in pagan tradition. The celebrations contain elements from the Roman Festival of Flora the Goddess of flowers and Beltane one of four major Celtic festivals. Taken from the god, Bel - the 'bright one', and the Gaelic word 'teine' meaning fire, we get ‘bright fire', representing the first day of Summer and the end of Winter. The thought of those long summer nights and a good harvest, with a plentiful supply of food to come, provided every excuse to celebrate May Day. 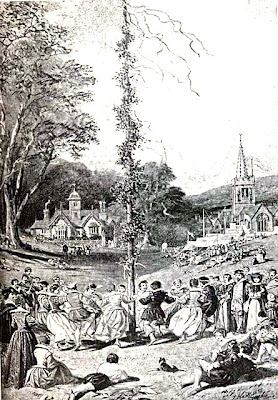 It was a tradition for young men and women to go out into the woods before sunrise in order to gather flowers and greenery to decorate their houses and villages with the belief that the vegetation spirits would bring good fortune and make the land fertile. Neighboring villages would compete to see who could bring back the largest piece of wood, which would be used as the maypole. Meanwhile young girls washed their faces with morning dew with the hope they would have radiant beauty for the rest of the year and made May garlands of flowers and foliage.

In 1480 the mayor of Coventry gives us an insight into the custom of ‘bringing in the May.’

“The people of every city – as London and other cities – yearly in Summer do harm to diverse lords and gentles having woods and groves nigh to such cities by taking of boughs and trees; and yet the lords and gentles suffer such deeds oft-times of their good will.”

The rest of the day was given over to various festivities. The villagers would take part in dancing on the village green, plays, archery and contests of strength. The highlight of the day was the crowning of the May Queen later the Maid Marian, the human replica of Flora. By tradition she took no part in the games or dancing, but sat like a queen in her flower-decked chair to watch over the subjects.

Maid Marian and the Friar with various characters from the May celebrations.
﻿A shepherdess called Marian and her lover Robin have links with these village plays and pastourelles at a very early medieval period. Eventually the outlaw traditions merged with these games, plays and celebrations and gradually up and down the country Robin Hood and Maid Marian became interchangeable with the Lord and Lady of the May Celebrations.

In surviving churchwarden accounts we have the records of these ‘revels,’ 'sports,’ and ‘plays,’ of Robin Hood.’ In Croscombe, just outside Wells in Somerset, the parish records include ‘Roben Hodes recons,’ for the ‘sport’ or ‘revel’ of Robin Hood. The player of the outlaw paid the amounts regularly. The churchwarden’s accounts for Kingston-on-Thames mention the costumes of ‘Robyn Hode with the mores daunsaies, the frère and mayde Maryan.’ The Friar wore white and Marian was given a green cloth (Kendal) and a satin trimmed cloak. 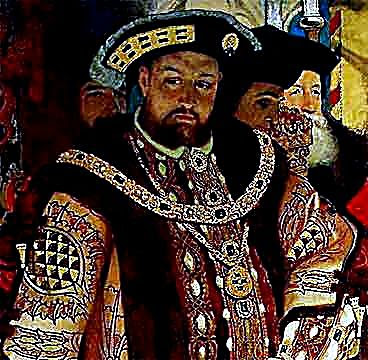 Henry VIII and Katherine﻿
﻿It was during the early 16th century that the printing presses began producing editions of the ‘Geste of Robyn Hode.’ The popularity of the outlaw was now immense and this fascinating report from Edward Hall’s (c. 1498–1547), ‘Chronicle’ of 1516 shows that even royalty were invited to celebrate May Day with Robin Hood:
“The King and Queen [Henry VIII and Queen Katherine] accompanied with many lords and ladies rode to the high ground of Shooters Hill to take the open air; and as they passed by the way, they espied a company of tall yeoman, clothed all in green with green hoods and bows and arrows, to the number of two hundred. Then one of them, which called himself Robyn hood, came to the King, desiring him to see his men shoot, and the king was content. Then he whistled and all the two hundred archers shot and loosed at once, and then he whistled again, and they likewise shot again; their arrows whistled by craft of the head, so that the noise was strange and great, and much pleased the King and Queen and all the company. All of these archers were of the King’s guard and had thus appareled themselves to make solace to the King. The Robyn hood desired the King and the Queen to come into the green wood, and to see how the outlaws live. The King demanded of the Queen and her ladies, if they durst adventure to go into the wood with so many outlaws. Then the Queen said that if it pleased him, she was content. Then the horns blew till they came to the wood under Shooters Hill, and there was an arbour made of boughs, with a hall and a great chamber very well made and covered with flowers and sweet herbs, which the King much praised. Then said Robyn hood, Sir, outlaws breakfast in venison, and therefore you must be content with such fare as we use. Then the King and Queen sat down, and were served with venison and wine by Robyn hood and his men to great contention.”

This account shows that by the Tudor period Robin Hood was not only associated with unruly and often bawdy May celebrations, but had diversified into a genial host and had began to prepare the grounds for later theatrical productions.

It's the Mayday celebration in Wellow again this Monday (public holiday in the UK). The village has erected a new maypole this year replacing the 'old' one that was installed in the 1970's. Don't think I'll make it this time though.

I also see some similarity with Henry meets Robin Hood with the King & miller legend as well. Obviously the legend was well known by the 1st half of the C16th.