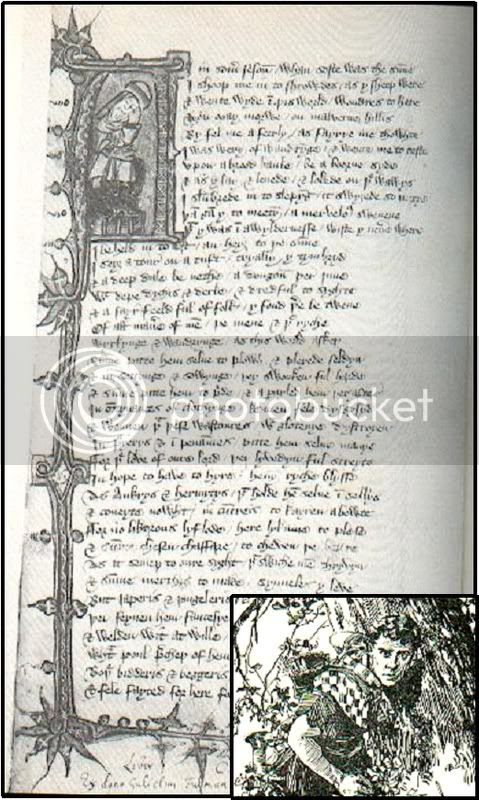 It was Bishop Thomas Percy (1729-1811) who first brought to our attention the fact that it is in “The Vision of William Concerning Piers the Plowman,” that we have our first literary reference to Robin Hood.

“Piers Plowman” is one of the most famous poems of the late fourteenth century and is written in the West Midland dialect, probably by William Langland (c. 1331- c.1400). It is an alliterative poem and survives in three versions, named the A, B and C texts. Robin Hood appears in the B text written about 1377.

The poet lies down to sleep among the Malvern Hills (between Herefordshire and Worcestershire):

Ac (But) on a May morwenyge, on Malverne hilles

I was wery forwandred and wente me to rest

Under a brook bank by a bourne side;

And as I lay and lenede and loked on the waters

And in a series of three visions the Dreamer describes the abuses and sufferings of the age, he sees Reason preach a sermon to the people and denounce the political causes in short, sharp accusing verse. To these people, Piers (Peter), a simple countryman offers to take them on a pilgrimage to find Truth.

‘Pardon and penance and prayer, may well save souls on the Last Day’, he concludes, but the best passport of all is do/well.

After Reason’s sermon, characters representing the seven deadly sins repent. The seventh character is Sloth, who had been a parson for thirty years, but is ignorant of Latin and all religious matters. He is described as all beslobbered with two slimy eyen and it is he who does not know his Paternoster (the Lord’s prayer in Latin), but knows rhymes of Robin Hood and Randolph Earl of Chester:

If I shulde deye bi this day me liste noughte to loke,

But I can rymes of Robyn hood and Randolf erle of Chestre,

Ac neither of owre lorde ne of owre lady the leste that evere was made.

This is a benchmark in any historical quest for Robin Hood and gives us our first firm indication of the popularity of the outlaw in fourteenth century England. In a literary context, Robin is linked by Langland with Randolf Earl of Chester, who is generally believed to be the third warrior baron of that name who joined Richard I in the siege of Nottingham in 1194 and appears in the prose romance Fouke le Fitz Waryn in which Randolf assists King John in the capture of the outlaw Fulk Fitzwarin.

The author of ‘Piers Plowman’ is probably William Langland, a mysterious character. He appears to have been a native of the Western Midlands, possibly born in Cleobury Mortimer in Shropshire and was probably educated at the Benedictine, Great Malvern Priory. His father was either a franklin or a farmer. Langland took minor orders but never became a priest. He later moved to London, where his ‘tall, thin, protesting figure,’ eked out a living, surviving by reciting prayers and verses and copying legal documents. Over sixty copies of Langland’s Piers Plowman survive, which is testimony to its popularity during the Middle Ages.

In his book “The Ballad Hero: Robin Hood” Joseph Hunter (1783-1861) describes the mention of Robin Hood by William Langland as:

…..testimony of the highest importance, it proves beyond all controversy the popularity of the ballads among the common people in the reign of Edward III and it seems also to prove, that in that reign, the outlaw was regarded as an actual person who had a veritable existence. Just as Randulf Earl of Chester was a real person.