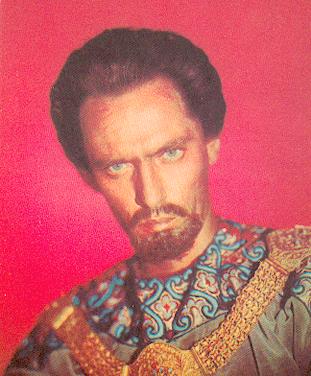 The Sheriff of Nottingham was played by Peter Finch, in one of his first major film roles. ‘Finchie’ was a protégé of Laurence Olivier and became a good friend of film producer Ken Annakin.

Born in South Kensington, London, on 28th September 1916, Frederick George Peter Ingle Finch was the natural son of Major Jock Campbell, a Highlander in the Black Watch and Alicia Ingle-Finch, during her marriage to George Ingle-Finch a notable mountaineer from New South Wales.

After his parents divorced in 1926 he went to live with his grandmother in Paris and later they moved to India. Aged ten he arrived in Sydney, Australia, where during the Depression he took on several dead end jobs, before working as a comedians stooge in vaudeville. In 1935 he made his stage acting debut, touring New South Wales with his travelling theatre company 'Mercury’ performing the classics in little theatres. A year later he debuted onscreen in ‘Dad and Dave Come to Town’.

‘Finchie’ served with the Australian First Army in the anti-tank battalion in the Middle East during WWII. But later on ‘civvie-street’ in 1948 his artistic ability gained his first film credit as assistant director and casting director for ‘Eureka Stockade’. He was now Australia’s top radio actor and his talents were soon noticed by Laurence Olivier who invited him to London to join the Old Vic and signed him to a personal contract. His impressive stage debut was alongside Edith Evans in ‘Daphne Laureda.’

At this time Finch started his long affair with Olivier’s wife, Vivian Leigh. But although personally humiliated, Olivier kept Finch under contract and his acting career continued to flourish. During his life he was also to have well-publicised affairs with Kay Kendall and Mai Zetterling.

Although he was now becoming an experienced performer, 'Finchie’ began suffering with severe stage fright (he also had a fear of flying). So much so, that he decided to put all his creative energy into acting on film and he made his Hollywood debut with ‘The Miniver Story’ and ‘The Wooden Horse’ in 1950.

In 1951 Finch took on the role of the Sheriff of Nottingham for Disney.

“Peter brought a freshness and a snide threat to the villainous character, without the histrionics of his predecessors in the role," said his friend and ‘Robin Hood’ producer Ken Annakin. “We became close friends and over the years I was sad to see how the strain of show business made Peter hit the bottle. He drank in order to cope with theatrical challenges he had never dreamed of in the outback or truly prepared for. But I don’t think he was ever as happy as his days in Denham, strutting around the stages as the Sheriff of Nottingham.”

As the Sheriff, ‘Finchie’ had to ride a horse, something, although he was brought up in Australia, he had never done. So the majority of riding shots were completed by a double. But for some of his spoken lines he had to film on horseback. These caused particular problems because, Peter’s horse, although supposedly a trained animal, seemed to have a dislike for actors and directors!

Every time ‘Finchie’ tried to mount his horse, it moved away from its mark, causing all sorts of problems for the film crew. This was an example, according to Annakin, of how amateurish the supply of trained horses and wranglers were for film companies in Britain, compared to the States.

Eventually the wrangler had to climb under the camera and hold down the horses hooves, while Peter Finch as the Sheriff spoke his lines. Even then as soon as ‘Finchie’ opened his mouth, the animal started snorting. This scene was used and appears in the early part of ‘Robin Hood’ when the Sheriff arrests William Scathelok for not paying his taxes.

As Peter Finch approached middle age his film career took off, with movies like the romantic comedy ‘Simon and Laura’ in 1965, the sombre war drama, ‘A Town like Alice’ in 1956, ‘Nuns Story’ in 1959 and back with Disney as Alan Breck Stewart in ‘Kidnapped’ in 1960.

Between 1956-71 he won five BAFTA awards, one of these for an exceptional performance in ‘The Trials of Oscar Wilde’ in 1960 . His debut as a film director, writer and producer came with his short, ‘Antonito’ and he went on to acclaimed roles in 'No Love for Johnnie’ in 1961, 'The Pumpkin Eater’ in 1964 and 'Far from the Madding Crowd’ in 1967. During his career he received two Oscar nominations, one for his portrayal as a gay doctor in ‘Sunday Bloody Sunday’ in 1971 and as the crazed television anchor man in ‘Network’ in 1976.

Sadly 64 year old Peter Finch collapsed and died in the lobby of the Beverley Wiltshire Hotel during a promotional campaign for ‘Network,’ on January 14th 1977. He was interred in the Hollywood Forever Cemetery, in California. His part in ‘Network’ had received rave reviews and he was nominated for an Oscar. He went on to win the award, which was accepted by his widow, Eletha. ‘Finchie’ remains the only actor to have received a nomination and Oscar posthumously.

Peter Finch was married three times. He had a daughter by his first wife Tamara Tchinarova, two children by his second, Yolande Turner and one child by Eletha Finch.

I've always thought Finch's Sheriff to be amongst the worst ever, although there's no doubting the man's talent in his other movies.

Didn't know he was having an affair with Olivier’s wife, Vivian Leigh. But I do remember a documentary about Olivier stating he was impotent, and had never consumated the marriage. So, if it was simply a marriage of mutual convenience and good publicity, he might not have been too upset with Finch.

You've got some great pictures here too.

I’m thoroughly enjoying putting this Blog together and seem to be getting quite a few visitors from around the World. It would be nice though, to get a bit of feedback from some of my other guests!