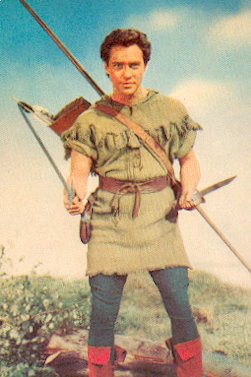 In Disney’s ‘Story of Robin Hood’, Robin’s father is shot in the back by Red Gill, one of the Sheriff’s foresters, who had been hiding up in the fork of a tree in the forest. After waiting in the bushes for a while, Robin soon discovers the tree in which his fathers assassin is concealed. Robin quickly let fly a shaft that thudded into Red Gill’s chest. The murderer swayed unsteadily then fell backwards crashing to the ground. Robin is in turn, outlawed by the Sheriff of Nottingham.

Twice a year in early medieval times, the sheriff made a tour of his county, visiting each hundred and hearing presentments of criminal activities. If a person failed to attend their trial after four successive occasions, they were placed outside the protection of the law. They were ‘outlawed’ and this meant their property was confiscated and they were banished from society. The sheriff and his bailiffs had to track down and arrest suspects once they were appealed or indicted. The arrest process was not always easy because suspects had ample time to escape.

Before the Norman Conquest a person that fled the law was known as a caput lupinum a 'wolfs head’. Anyone had the right to hunt them down like a vicious animal. In the Great Roll of the Exchequer for 1195 there is an allowance by writ of ‘2 marks to Thomas de Preswude for bringing to Westminster the head of William de Elleford an outlaw.’

Roger of Hovedon informs us that after Richard ’s (1189-1199) Coronation his mother Queen Eleanor made a royal progress through England on behalf of the new king to proclaim that all persons in prison or outlawed for Forest Offences were to be freed at once.

“In as much as, in her own person, she had learnt by experience that confinement is distasteful to mankind and that it is most delightful to the spirits to be liberated there from.”

Therefore an outlaw ‘bore the wolf’s head’ and many thieves and political rebels that found themselves in this position took refuge in forests, such as Sherwood. Hidden in the dense greenwood, they were almost impossible to find.

At the Gloucester assizes in 1222 three hundred and thirty homicide cases were recorded. Fourteen men had been hung, but a hundred suspects were proclaimed outlaws because they could not be traced.

During the unrest in 1266 a royal letter describes conditions at this time:

A report given to a jury in 1287 gives an example of a‘ Robin Hood’ style incident in Sherwood Forest:

“John de Lascelles, then steward of the forest (Sherwood) , came to Salterford and there found Robert the Monk and Robert of Alfreton with bows and arrows; and he seized them and took them to Blidworth to hold them in custody until the morrow. And later that night twenty men armed with bows and arrows came to where the aforesaid men were under arrest, broke down the entrance to the buildings, sorely beat a certain Gilbert, page of the aforesaid John the Steward, who was keeping guard over the men, and released them from custody. Later all the aforesaid men attacked the chamber where the said John de Lascelles lay and broke the doors and windows of the said chamber. In which matter an enquiry was made by foresters, verderers, regarders and other officials of the forest.”

By the time the jury met, three of the accused had fled to Yorkshire, five could not be found. The rest, merely a handful were imprisoned.

There have been hundreds of Robert/Robin Hood’s discovered in records from the medieval period. Many have had brushes with the legal system. But none have been more tantalising than the 'Robert Hod, fugitive’, who failed to appear before the justices at the York assizes in 1225 and whose chattels, worth 32s.6d., were accordingly forfeit at the Michaelmas exchequer in 1226.

Many outlaws that were popular ballad heroes at this time faded from memory, Like Hereward, Fulk Fitzwarin, Gamelyn, Eustace the Monk and William Wallace. But these and many others had stories and ballads told to audiences by wandering entertainers. Their surviving tales contain remarkably similar themes and were the ‘soap operas’ of the day. Using disguise and trickery the outlaw of the minstrel’s ballad is always the champion of justice. An expert swordsman and hero of the oppressed.

So it becomes almost impossible to unravel fact from fiction.

Many ‘Robin Hood’ films and stories have the outlaw being pardoned by the king. This is not as fanciful as it seems. Only the monarch could reverse a sentence of outlawry and many were pardoned on condition that they served in the royal army.

From the Patent Rolls for 1326 we have a pardon “granted to Thomas Le Parker of Norwell for all his trespasses of Vert and Venison in Sherwood Forest upon condition that he go with king against invasion of his wages.”

Fulk Fitzwarin, a legendry outlaw during the reign of King John, was pardoned in 1203, along with thirty eight others who had been outlawed for being in his company.

During the reign of Edward III (1322-77) the laws on outlawry were repealed, allowing only a Sheriff the powers to put an outlaw to death. Outlawry originally had meant that the person was outside the law and could be killed outright if he was found, but by the fourteenth century most outlaws were arrested. The outlaw’s possessions were forfeited to the sovereign and his lands went to his lord.

The same I say, ther is difference,

By force of meine for to sle down right,

And, for the outlawe hath but small meine,

And may not do so grete an harme as he,

Geoffrey Chaucer was himself relieved of £20 near a certain ‘Fowle Oak’ in the Autumn of 1390 by highway robbers. He was ambushed while travelling to London on at least three separate occasions.

“ For she is a weyve whom no one will own, and it is equivalent to an outlaw, so far as penal consequences go. An outlaw and a weyve bear wolves heads which may be cut off by anyone with impunity, for deservedly they ought to perish with out law who would refuse to live according to law.”

The evidence shows that people from all ranks of society turned to crime, members of parliament, nobles, gentry, yeoman farmers. The chances of being caught were small, but in real life, living in the forest was hard and extremely uncomfortable. Evidence shows that that bandits trying to live in such wild conditions often stole ‘ordinary’ items just to keep alive. Almost always, the outlaw gangs of medieval England, robbed the poor and kept the takings for themselves.

In the thirteenth century, 40 per cent of all crime was larceny, consisting mainly of farm stock. Nearly twenty per cent was burglary and ten per cent was robbery. Homicide was recorded at nearly 20 per cent and around 6 percent was handling stolen goods. There were small percentages for arson, rape and treason.

The threat of murder or serious wounding in thirteenth century London was nearly twenty times higher than it is now.

About 12 percent of the army of English archers that beat off the French cavalry charges during the battle of Crecy in 1346 consisted of outlaws and between 1346-1347 several hundred grants of pardon were issued for service in Scotland and France.

On 21 November 1338, forty three archers joined the company of troops to enforce the garrison on the Isle of Wight from the French. Amongst the names recorded in the accounts of the new arrivals preserved at the Public Record Office is none other than ‘Robin Hood’.

Outlawry was abolished in civil proceedings in 1879. But it was as recent as 1938 in criminal proceedings.

That be of frebore blode;

I shall you tel of a gode yeman,

His name was Robyn Hode.

Robyn was a proud outlaw,

Whyles he walked on grounde;