My posts on Joan Rice (1930-1997) are always very popular and I would like to thank you all for your kind messages. It makes it all worthwhile to read comments from my readers.

Christian is a regular visitor to this web site and recently sent me some lovely pictures of our Joan, including these from her last big movie, His Majesty O’Keefe (1954). I have also included some of my own. 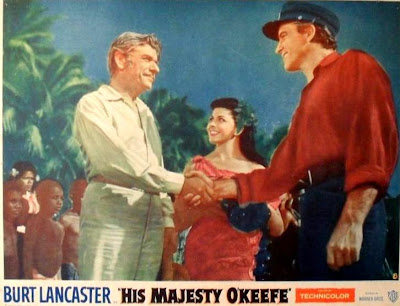 Sadly, this film, with Burt Lancaster, would be the pinnacle of Joan’s very short rise to stardom. Why she faded from popularity with Hollywood remains a mystery. But her memory lives on in the pages of this web site and one fascinating article that I posted a few years ago, gives us an insight into how she felt, flying out to America for the first time.

The Picturegoer Magazine dated September 13th 1952, printed a ‘letter’ from Joan Rice about her experiences flying to the States to film ‘His Majesty O’Keefe’. In this remarkably candid letter we read of her experiences of home-sickness, stage nerves, height problems, engagement, her plans for marriage and preparations for film production. 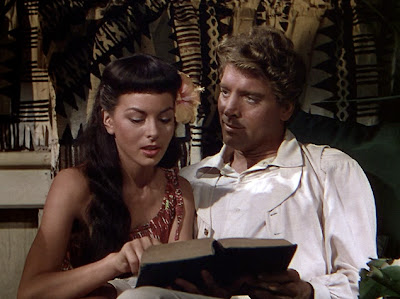 Below is a short snippet:
“His Majesty O’Keefe’ is a period picture, and as well as sarongs I am going to wear two lovely gowns. One is lavender lace and velvet wedding dress with a bustle. I hadn’t seen the script then, but I knew there’s an amusing scene where I try on the dress and then refuse to wear it, because I have got it on the wrong way round and I don’t like that “hump” (that is the bustle) in front.

The studio hairdressing department is like a Bond Street salon. Even in the waiting rooms the appointments are magnificent. Hollywood really tries to make its stars feel good. And the clips they used for waving hair are better than ours. They give a softer wave without risk of breaking or making a “line” in the hair.

They had to build me up on the chair because I am rather short in the body. I didn’t quite reach the dryer. They piled cinema magazines under me, so I really sat on the stars. I noticed the picture on top was of Ava Gardner. Some of the Warners stars very kindly came to say “hallo” to me as I spent those long hours in the make-up and hairdressing chairs. I couldn’t talk to them (ever tried to talk with your head in a dryer, or while a man’s painting your lips?), but it was all very friendly. Steve Cochran was particularly charming.

Friendliness is one of the things about Hollywood. Leroy Prinz, the director, said I was to come back to Hollywood and he’d put me in musicals. I don’t know about that. I only know I’m booked for four months on this film, in Fijii with Burt Lancaster, whom I’ve met only once – at a Royal Film Performance. (I was very nervous-it was my first stage appearance. Afterwards he grinned and said: “Well, it wasn’t so bad, was it?”) I think the really surprising thing about Hollywood is that it’s just what you would expect. If you’ve seen it in the pictures-you’ve seen it. People do just the same things, in the same way, as on the screen. Of course, the sunshine is indescribable-there just aren’t the words. It’s sun, sun, sun. You almost expect it to blaze all night.”


Recently I was contacted by Alan King, who told me that he had some pictures of Joan Rice (1930-1997) taken in the early 1970’s and would I like to see them? Of course I was thrilled to see pictures of Joan during a period of her life which has remained somewhat of a mystery. This blog is dedicated to her memory and contains over 60 seperate pages of letters, magazine articles, glamour pictures and film stills. 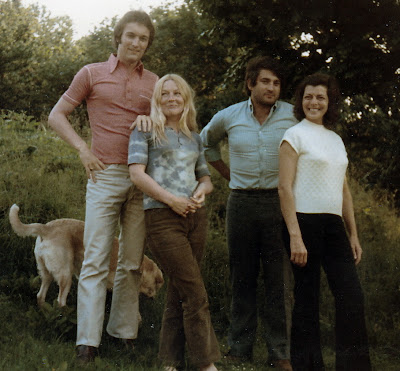 This is what Alan says:

“My wife met Joan in 1970’ish (at work I think, but can't remember where). We were friends for a few years and Joan managed the letting of our flat when we moved away from Maidenhead in 1976. We sold our place a couple of years later and lost touch. I have fond memories of a lovely lady. The photos were taken in 1971 on holiday in Scotland - the Isle of Islay. In the one with all four of us, I'm on the left with my wife, Helen. Joan's boyfriend was . . . ? may have been Tony. He was Italian and worked at the Marlow restaurant she frequented.” 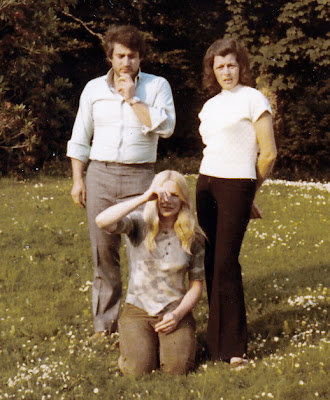 A very special thank you to Alan, for sharing his personal
photographs of Joan Rice with us.

Her last movie ‘The Horror of Frankenstein’ was released in
December 1970 and shortly after she set up the ‘Joan Rice Bureau’
in Maidenhead, Berkshire. It was here that her office dealt with
real estate and property. But two years later, Joan returned to
acting, this time on stage at the Theatre Royal in Windsor and also in Norwich.

To read more about the life of Joan Rice please click here.
If you met Joan, or have any information about her life, I would be very pleased to hear from you.

Elton Hayes with the Second Unit 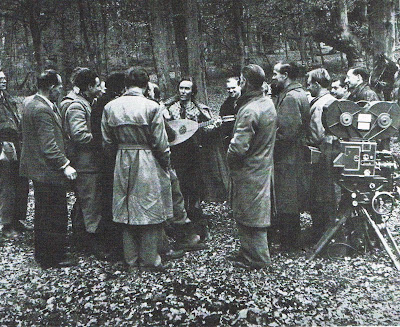 This wonderful picture of Elton Hayes as Alan-a-Dale with the second unit on location at Burnham Beeches appeared in The Cinema Studio magazine in July 1951. Images from the magazine have already appeared on various posts throughout this blog and give a fascinating insight into how Disney’s live-action movie the Story of Robin Hood and his Merrie Men (1952) was filmed.

Below the picture the caption reads: "Deep in Burnham Beeches the second unit forsake the Technicolor camera for a while to listen to Elton Hayes who plays Alan-a-Dale in “Robin Hood” as he sings to his guitar. Elton provides many airs and ditties suitable to the period of the time."

To read more about the work behind the camera on Robin Hood and the fascinating life of Elton Hayes please click on the links.
4 comments:

Email ThisBlogThis!Share to TwitterShare to FacebookShare to Pinterest
Labels: Behind The Camera, Burnham Beeches, Elton Hayes 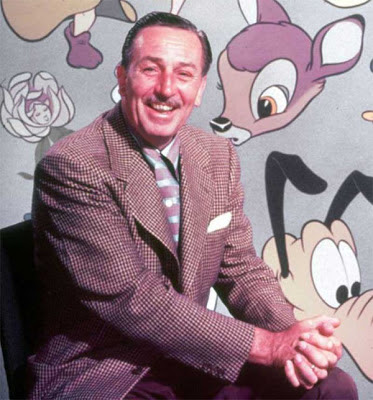 
This porcelain figurine of Robin Hood sitting on a tree stump is from the Sherwood Forest Series by Paragon (1919-1960).

The Paragon China Company was a bone china manufacturer, based in Longton, Stoke-on-Trent. Previously known as the Star China Company, and more recently part of the Royal Doulton group. Paragon produced high quality teaware and tableware, and was granted royal warrants by several members of the British Royal Family.

Paragon's 'Sherwood Forest' series included a Friar Tuck, Alan-a-Dale and Maid Marian; each member of the outlaw band was about twenty centimeters high. Unfortunately, I have been unable to find a date for the production of this beautifuly made character, but I can't help thinking this figurine was based on Walt Disney's live-action Robin Hood played by Richard Todd.
4 comments: