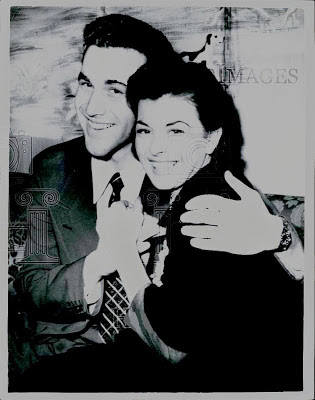 In July 1952, during the filming of His Majesty O’ Keefe, Joan Rice became engaged to Martin Boyce, the manager of an auto parts factory, whom she described as a ‘regular pip of a fellow.’

In a press article she said, “"We went together for a year and three months before he proposed. As I recall it, we held hands after four months, then he kissed me on the sixth month of our meeting each other and things were on a standstill after that, until I got the news I was coming to the States."

But her engagement with Martin Boyce lasted less than 5 months and a recent discovery I have made on the back of a press photograph  reveals a little more information on her whirlwind romance with her first husband, David Green.

“Miss Joan Rice 22 year old waitress turned film star; photographed last night with her fiancée; 19 year old Mr. David Green. When she returned from the Fiji Islands two months ago she denied that she had broken her engagement to Martin Boyce – but last night she revealed her engagement to Mr. Green, whom she met at a Christmas party. He was a Public Schools Heavyweight Champion before leaving  Harrow, and is now a film salesman travelling for a Hollywood company in England.”

Joan and David were married at Maidenhead Registry Office a month later, on the 16th February 1953.

There are now over 56 pages of pictures and information about Joan Rice, so to find out more about her fascinating life, please click here.

Queues at the Leicester Square Theatre 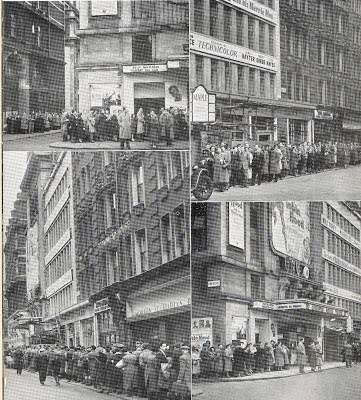 This article taken from ‘To-Day’s Cinema’ on Thursday March 27th 1952, was kindly sent in by Neil and shows the crowds of people hoping to see Walt Disney’s live action movie the ‘Story of Robin Hood.’ By the look of the pictures the film remained a huge success with audiences of the 1950’s in the second week of its release. Unfortunately I am still having trouble finding out how much it made for the Disney organisation at the box office. So if anyone can help with this information, I would be very grateful.

“Walt Disney’s Story of Robin Hood and his Merrie Men, the RKO Radio release in Technicolor starring Richard Todd with Joan Rice is keeping up its second week pressure, as evidenced by these photographs taken outside the Leicester Square Theatre, where it has been attracting spectacular business since its World Premiere on March 13th. Part of the second week-end queues to one side of the house, with a defile waiting patiently across the other side of the street, facing that along the theatre itself.” 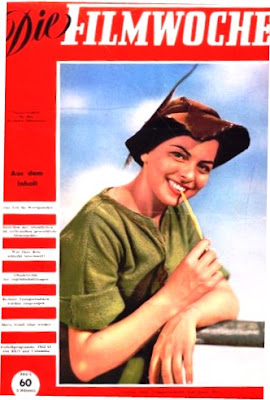 This lovely picture of Joan Rice as Maid Marian promoting Disney's live action movie the Story of Robin Hood and his Merrie Men, appeared in the German film magazine 'Die Filmwoche' in 1952. If my German translator is correct, the title of the magazine means The Film Week.﻿
﻿