Elton Hayes at the Liverpool Empire Above is a very rare poster from the early 1950’s promoting Elton Hayes at the Empire Theatre in Liverpool.


Today he is sadly almost forgotten, but Hayes was very well-known to radio and television audiences of the 1950’s as ‘the man with the small guitar.'


When Walt Disney's Treasure Island (1950) was made, Elton had the task of arranging the old sea shanties sung on board the Hispaniola. This was followed by the job of researching ancient ballads for their forthcoming production of 'Robin Hood.' The producer, Perce Pearce asked him to assist in another actor's screen test, and then sprang the surprise that it had been Elton on test and the part of Alan-a-Dale was his! So good was he in that role that, although it started as a few lines, it developed into one of the main parts in the film.


The success of the film led to a nineteen-city tour of the USA and Canada, making 113 radio and TV appearances in 8 hectic weeks! 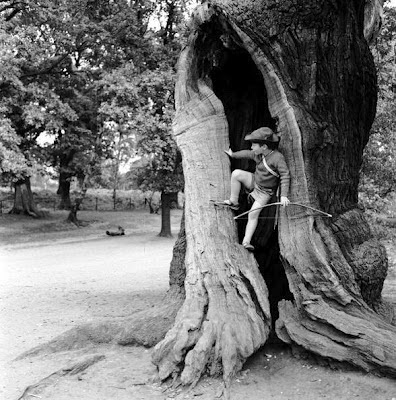 I saw this wonderful old picture recently; unfortunately I have no idea where or when it was taken, but I would guess it was sometime in the 1950’s or early 1960’s. It rekindled many happy memories of my own. As many of you know, during my youth I was lucky enough to live near woodland - and like the boy in the picture - I would often let my imagination take me to Sherwood Forest.

With the wonderful RobinHood TV series starring Richard Greene regularly shown, along with the Hollywood adventure movies such as Ivanhoe and The Knights of the Round Table, I was easily inspired. Later in the 1970’s I saw Disney’s live-action version of the Robin Hood story for the first time and this sparked my interest into researching the fascinating legend of the outlaw.

But sadly times have changed - and these days’ children very rarely get the opportunity to climb trees, build camps in the woods, or have pretend quarter staff fights. They now of course have their electronic 3D games that can do all that for them. But in my opinion nothing can replace the experience of being embraced by natural sunlit woodland and hearing the bird song under a canopy of green leaves. It is only then that I have found your imagination will lead you to Robin Hood.

Film of the Month

These two YouTube clips from the Walt Disney Family Museum in San Francisco were kindly sent in by Neil.   The first one advertises the fact that the Story of Robin Hood and his Merrie Men (1952) was going to be the film of the month for May. I would have loved to have been there and would be interested to know if the museum had an exhibition dedicated to the movie!

The second clip is part of a fascinating interview with the late Ken Annakin (1914-2009), describing his work for Walt Disney. In this small section we hear him explain about Disney’s choice of CarmanDillon as Art Director on Robin Hood and the technique of sketching out each and every scene.


To read a longer interview with Ken Annakin on the making of Robin Hood, please click here. 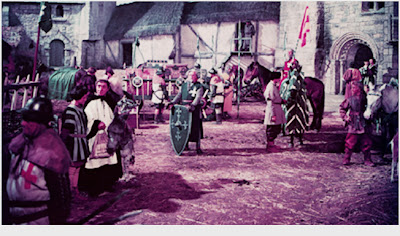 Above is a rare image of Huntingdon Manor showing the wonderful attention to detail by art director Carman Dillon (1908 -2000) on Walt Disney’s live action movie the Story of Robin Hood and his Merrie Men(1952). Information about the research and attention to detail by this remarkable woman can be seen here.

Huntingdon Manor appears at the opening of the film and the courtyard is full of hustle and bustle as Marian’s father prepares to go on Crusade with the king. It is here we see some of Carmen Dillon’s artistry and the product of her immense research.
Twenty five interior sets were designed by her, including ‘Nottingham Square’ which was constructed both on Denham lot and on one of the huge sound stages.