Robin Hood Flour was founded in 1900 by Donald Mclean in Moose Jaw, Saskatchewan, in western Canada. In 1909 the mill was taken over by Francis Atherton Bean of Minneapolis and within two years it was producing over 1,600 barrels of flour a day. Using the green and red ‘archer’ emblem as a sign of good value and respectability, Robin Hood Flour and its recipes have remained popular for over a century.
A while ago I posted about Robin Hood Flour and their promotion of the live action Disney film The Story of Robin Hood and his Merrie Men (1952). Below are the first five pages of the very rare Robin Hood Flour Comic that was produced as part of the campaign. These pages were very kindly sent in by Laurence.
Laurence commented on how the artist has remained quite faithful to the costumes in the film and I was also impressed by the quality of the artwork. 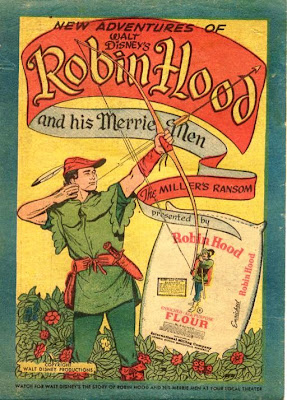 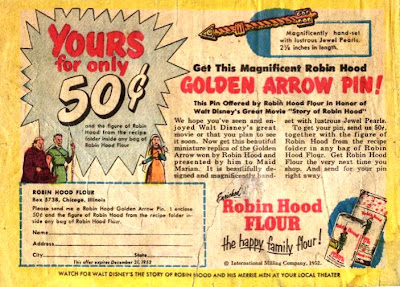 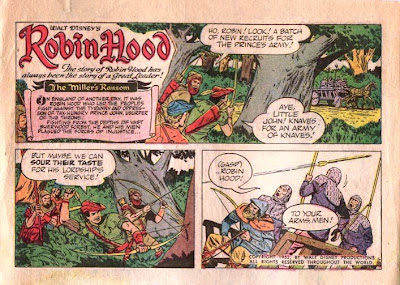 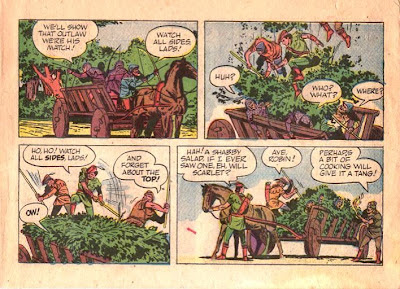 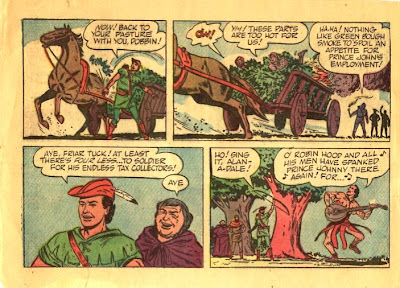 
To celebrate the most romantic day of the year, Valentine’s Day, I have posted one of my favourite stills from Walt Disney’s Story of Robin Hood (1952). Above is Richard Todd as Robin Hood and Joan Rice as Maid Marian in a passionate pose to promote the live-action movie. I think you will agree that it’s quite a steamy shot for a Disney film!

To see many other promotional stills from Disney’s Robin Hood, just click on Picture Gallery.

The Production Unit in Nottinghamshire 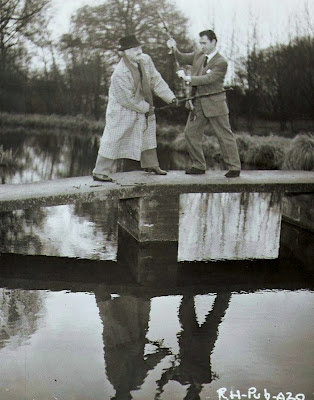 I was thrilled to discover this press picture (above) for sale on Ebay recently. It is a very rare image of Walt Disney’s legendary producer Perce Pearce (1899-1955) and Richard Todd (1919-2009) practising a quarter-staff fight during their fact-finding trip to Nottinghamshire before the filming of the Story of Robin Hood and his Merrie Men.
Below is an extract from the magazine Photoplay dated June 1951 about the trip:
“When Walt Disney first announced that he was to make ‘Robin Hood’ he received a letter from the Sheriff of Nottingham inviting him to visit the City Library and inspect the collection of over a thousand books of ‘Robin Hood’ lore. Walt Disney replied that he himself would be unable to go to England until the film actually went before the cameras, but that he would extend the kind invitation to Richard Todd and his production unit under the supervision of producer Perce Pearce.
When Richard Todd and the production unit visited Nottingham this spring [1951], they were received by the Lord Mayor, the Sheriff and other civic dignitaries and were afforded every possible local facility to retrace the footsteps of the famous outlaw.
Richard Todd absorbed a mine of information which gave him a penetrating insight into the character of Robin Hood when he came to portray his historic counterpart. The production unit, too, covered many miles of Robin Hood country, to ensure that local settings reproduced at Denham Studios under the supervision of Art Director Carmen Dillon, should maintain the highest degree of authenticity.” 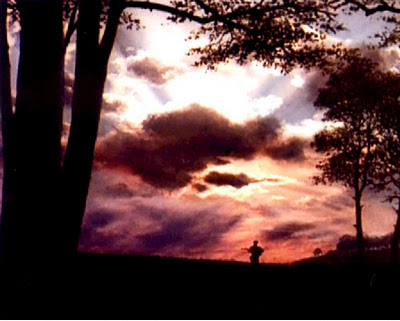 Peter Ellenshaw worked on over 30 films for Walt Disney. His beautiful matte paintings created the fantasy worlds that were essential in the days before computer special effects. On Disney’s Story of Robin Hood he painted twelve matte shots-and one image in particular always stands out for me. It is the final shot in which Alan a Dale walks into the sunset playing his lute.
On my last visit to Sherwood Forest I was determined to see if I could emulate that particular image. So I waited patiently by the entrance to the Visitor Centre-camera ready. Below is my attempt at capturing that special moment in the film as the sun sets over the woodland. 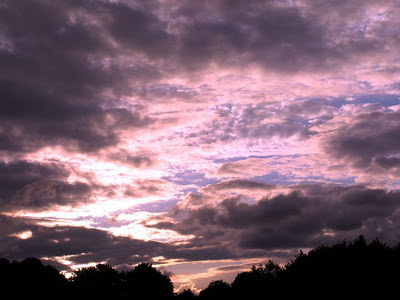 Sherwood is a magical place, full of legend, natural beauty and well worth a visit. Once stepping along the winding paths, listening to the birdsong and visiting the sun dappled glades it is very easy to be transported back to the world of Robin Hood.

Below are some more pictures I have taken during my visits to what has become known as England’s heart of oak-Sherwood Forest. 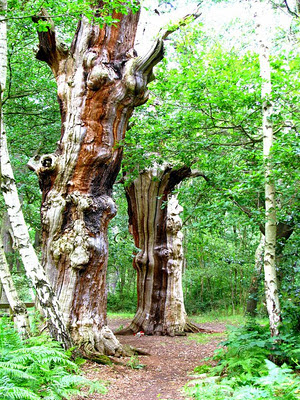 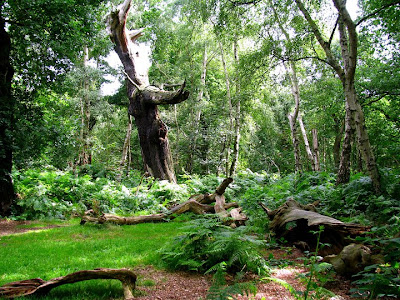 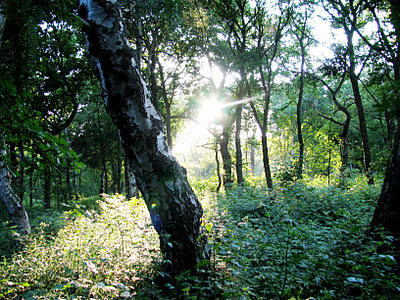